The Dow Jones Industrial Average has been around for more than 120 years and for most of its existence it has been used as a benchmark for the overall stock market health. Also, alongside the S&P 500, Dow Jones is the most quoted financial benchmark and is often used to describe the market, i.e. when some people refer to the market going up or down, they actually use Dow’s performance.

The reason it’s so popular is that Dow was actually designed to be a benchmark index. Charles Dow included 12 capitalized railroad companies and two industrial companies in his first index in 1884. His plan was to define an index that would track the performance of the US economy. As the time passed, Dow included more industrial stocks as the importance of the industrial sector increased. The first Dow Jones Industrial Average index was published in 1896 and it included 12 industrial stocks. The 30-stock version of the Index that we’re familiar with was introduced in 1928. The most long-lived stock in the Dow was General Electric Company (NYSE:GE), which was included in the original 12-stock version until it’s removal in 2018.

Even though it includes only 30 stocks, Dow Jones Industrial Average remains one of the most referenced indexes as it includes some of the largest companies in the US. However, it does not include giants like tech behemoths Amazon.com, Inc. (NASDAQ:AMZN) and Alphabet Inc (NASDAQ:GOOG) and probably it never will. The reason for that is that Dow Jones is a price-weighted index, so the highest the price of a stock, the more weight it has on the index’s performance. So, currently, with the highest-priced stock in the Dow being UnitedHealth Group Inc (NYSE:UNH) which is valued at around $340, adding Amazon and Alphabet, which are priced at $3,200 and $1,700, would pretty much turn it into a two-stock index.

In fact, out of the five largest stocks in terms of capitalization (over $1.0 trillion), only two are included in the Dow. What’s more, most of the largest companies that are not included in the Dow, are tech and Internet giants, which actually reflects the shift that the US economy has made from its early industrial days. Therefore, it’s worth asking the question of whether Dow still represents the benchmark of the US economy, or has it become obsolete?

It might not be reflective of the US economy that has been altered with the technological advancement, but Dow is far from being obsolete. Even though it is much smaller than its S&P 500 counterpart, Dow has been closely tracking the S&P 500, but it has been less volatile. Over the last five years, the S&P 500 returned around 81% and the Dow Jones Industrial Average has been up by 74%.

So, should one consider investing in Dow stocks? Most certainly so, as Dow companies are carefully picked and only companies with the most outstanding reputation and strong financials are included to be a part of the index by a special committee. One approach to invest in Dow stocks, is to buy shares of an ETF like SPDR Dow Jones Industrial Average ETF Trust (NYSEARCA:DIA). However, we have a better idea. We have selected a list of 10 best Dow stocks to buy now, by taking into account not just their performance over the past year, but also by assessing their popularity among hedge funds. This metric, called hedge fund sentiment, allows us to identify the best-performing stocks for the long run.

Our research that covers the portfolios of over 800 hedge funds has allowed us to identify a select group of stocks that outperformed the S&P 500 ETF (SPY) by more than 78 percentage points since March 2017. We are sharing our picks in our premium quarterly and monthly newsletters, which you can read more about by following this link. Also, make sure to subscribe to our free newsletter on our homepage to receive our latest insights and news.

So, with this in mind, let’s take a look at 10 best Dow stocks to buy now, based on their performance as well as their popularity among hedge funds tracked by Insider Monkey.

Our list starts with Walmart Inc (NYSE:WMT) on the 10th spot. At the end of the third quarter, 69 funds from our database reported holding $5.49 billion worth of stock, compared to 60 investors with $5.83 billion worth of shares three months earlier. Walmart’s stock has been a solid investment for decades and 2020 has also been a success for its shareholders so far.

Walmart gained over 20% since the beginning of the year, as the company recorded a substantial sales growth amid the pandemic and lockdowns that scared people into piling goods and increased demand for certain products. In this way, for the quarters ended April and July 2020, Walmart reported revenue growth of nearly 9% and 6%, respectively, which is impressive considering that the highest growth in the previous 10 quarters had been 4.2%. Another reason for the growth is Walmart’s increasing online presence, which is also why we included Walmart in our list of top 5 retail stocks to buy now.

Among the top shareholders of Walmart Inc (NYSE:WMT) is Bill & Melinda Gates Foundation Trust, Ken Fisher’s Fisher Asset Management, and Cliff Asness’ AQR Capital Management. Additionally, it’s worth mentioning that billionaire Ray Dalio’s Bridgewater Associates added Walmart to its equity portfolio during the third quarter and it’s one of the investor’s top 10 holdings as of the end of September.

Even after a drop of over 30% in March, Home Depot Inc (NYSE:HD)’s stock is up by more than 22% since the beginning of the year. Home Depot has recently acquired HD Supply, which has been very well received by the Street. Investors and analysts believe that the $8.7 billion acquisition (or better say re-integration, because HD Supply was a part of Home Depot until it was sold in 2007) will expand Home Depot’s reach into the Maintenance, Repair and Operations Market. Moreover, Home Depot stands to gain from the conclusions that will likely come out of the pandemic and the trends for single-family houses that will likely be set. As more companies have expressed the possibility to make work-from-home a permanent option for their employees, it’s expected that more people will opt for single-family houses, as they offer more space and are overall a better option for families with children.

Home Depot Inc (NYSE:HD) saw 73 funds holding shares at the end of September, down by 12 over the quarter. However, the aggregate value of positions held by these funds increased to $4.96 billion from $4.64 billion. Billionaire Ken Fisher’s Fisher Asset Management holds the largest position in Home Depot as of the end of September, disclosing a $1.82 billion position in its latest 13F filing.

Andy Brown’s Cedar Rock Capital is the top shareholder of Procter & Gamble Co (NYSE:PG) among the funds in our database. In its latest 13F filing, it disclosed a $1.53 billion position containing 11.03 million shares. Cedar Rock is followed by Nelson Peltz’s Trian Partners and Peter Rathjens, Bruce Clarke, and John Campbell’s Arrowstreet Capital, with stakes worth $1.41 billion and $1.19 billion, respectively.

In Nike Inc (NYSE:NKE) there were 75 funds holding $4.22 billion worth of stock at the end of September, compared to 71 investors with $2.60 billion in shares a quarter earlier. These investors include Fisher Asset Management, Gabriel Plotkin’s Melvin Capital Management, Nicolai Tangen’s Ako Capital and others.

Nike Inc (NYSE:NKE)’s shares appreciated by 39% since the beginning of the year, as the company first had a terrible quarter with sales significantly down due to lockdowns, but then managed to recover. For the fiscal fourth quarter, ended May, Nike reported a 38% annual drop in revenue to $6.31 billion, which also missed expectations by $948 million. At the same time, the company posted a net loss of $0.51, significantly lower than the expected profit of $0.04 per share. However, the following quarter, Nike recovered by delivering a revenue of $10.59 billion, which was almost equal to the previous year’s value, and which was $1.45 billion higher than expected. In the last quarter, Nike posted a revenue of $11.24 billion, up by 9% on the year and $730 million above the consensus.

Then there’s UnitedHealthGroup Inc (NYSE:UNH), whose stock has appreciated by 16.51% since the beginning of the year. Recently, the healthcare company announced a partnership with Eli Lilly And Co (NYSE:LLY) to conduct a pragmatic study of the pharma company’s bamlanivimab in high-risk patients infected with COVID-19. Bamlavimab is authorized for emergency use for COVID-19 patients that are at risk of getting a severe form of the virus. For the last quarter, UnitedHealthGroup Inc (NYSE:UNH) posted a revenue of $65.11 billion, up by 7.89%, and $1.15 billion higher than expected, while its EPS of $3.51 topped the estimates by $0.43. Overall, the company has been reporting solid revenue growth for the last several years and only missed the quarterly estimates four times since 2015.

Even though the number of funds with long positions in UnitedHealth Group Inc (NYSE:UNH) dropped by seven to 89 during the third quarter, the total value of stock held by investors followed by us inched up to $8.96 billion from $8.33 billion. Among these funds, Stephen Mandel’s Lone Pine Capital and Boykin Curry’s Eagle Capital Management are the top shareholders of UnitedHealthGroup Inc (NYSE:UNH), owning 3.95 million and 3.54 million shares, respectively.

Click to continue reading and see the 5 Best Dow Stocks to Buy Now.

Here are 21 ways to reduce debt, build an emergency fund in 2021

Tue Dec 29 , 2020
Start the countdown: A new year is fast approaching. So now is the time to hatch a plan to get your personal finances back on track. Think of 2021 as a fresh start to solve your money worries. Here are 21 tips – or must-do “money” resolutions for the New […] 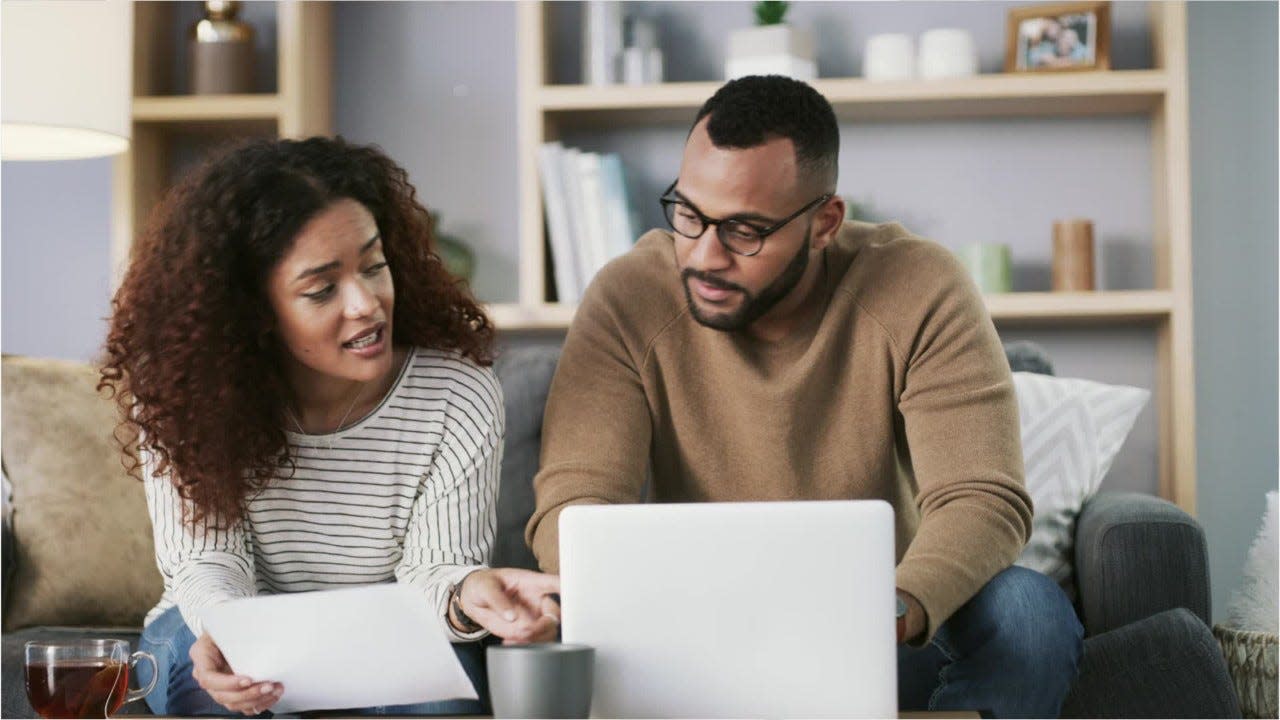