You might have heard this billionaire’s name, but who is Mark Cuban and how did he make his money? It’s possible you know him as one of the sharks on the hit show “Shark Tank,” but Cuban is more than just a TV personality — he’s also the owner of the Dallas Mavericks and a successful investor. In fact, Mark Cuban’s companies are so successful that he made his first million in 1990 after selling his business to CompuServe and then earned a $5.9 billion paycheck after he sold his online streaming audio service to Yahoo in 1999.

Cuban knows how to be rich and successful, and he isn’t afraid to share his insight. Check out Mark Cuban’s advice, so you can learn how to budget money and think like a billionaire.

1. Be a Little Bit of a Risk Taker

Talk to any self-made millionaires or billionaires and they might preach the importance of taking calculated risks. Sometimes, risks and rewards go hand-in-hand, as Cuban pointed out in a 2017 interview with Money magazine while discussing the value of investing your savings. He explained that it’s possible to save a million dollars, but only if you’re disciplined and take risks. Many who achieve higher levels of financial success aren’t afraid to invest for the betterment of their future — whether they’re investing in the market, a business or their education.

2. But Only Invest Up To 10% in Risky Investments

If you do take risks in the investment realm, limit the amount you contribute.

“If you’re a true adventurer and you really want to throw the Hail Mary, you might take 10% and put it in bitcoin or Ethereum, but if you do that, you’ve got to pretend you’ve already lost your money,” Cuban told Vanity Fair. “It’s like collecting art, it’s like collecting baseball cards, it’s like collecting shoes — something’s worth what somebody else would pay for it. I’d limit [risky investments] to 10%.”

In an exclusive interview with Young Money, a personal finance education and media company, Cuban offered this general investing advice and then followed the statement by saying, “The idiots that tell you to put your money in the market because eventually it will go up need to tell you that because they are trying to sell you something. The stock market is probably the worst investment vehicle out there.”

Although some investors believe the stock market is the ticket to wealth, others believe the market is too risky and volatile. Your stock can be profitable one day, yet it only takes one downturn to lose it all. Rather than put all your eggs in the stock market, Cuban encourages keeping some money in a savings account for a rainy day so you’re protected if something goes wrong. In his own words, “Buy-and-hold is a sucker’s game … Those who put their money in CDs sleep well at night and definitely have more money today than they did yesterday.”

Aim to have six months worth of income saved in that bank account, Cuban told Vanity Fair.

“If you don’t like your job at some point or you get fired or you have to move or something goes wrong, you’re going to need at least six months income,” he said.

5. Find a Way To Invest Inexpensively in the Market

If you want to dabble in the market, Cuban advises doing so safely to minimize your risk. In his conversation with Money, he suggested investing in a low-cost mutual fund. These are investments that let you pool your assets with the assets of other investors, which provides a cheaper way to diversify your portfolio. As Cuban puts it: “If you can find a way to invest inexpensively in the market, you can start to build your net worth.”

Check Out: The Best Stocks for Beginners To Invest In Right Now

6. If You Don’t Fully Understand the Risks of an Investment You’re Considering, It’s OK To Do Nothing

Cuban gave this advice in a blog on his site titled “The Best Investment Advice You Will Ever Get.” Although investing can build your net worth and put you on the path toward financial freedom, there’s no guarantee that an investment strategy will pay off.

Before investing, make sure you know the risks and prepare for the possibility of losing money. If you have doubts — or if there’s too much uncertainty surrounding an investment — there’s nothing wrong with holding onto your cash until the right opportunity comes along.

7. Don’t Let Fear Be a Roadblock

Cuban shared this statement in his book “How to Win at the Sport of Business: If I Can Do It, You Can Do It.” Fear is a natural feeling, but it’s also one of the worst enemies to success. If you want to get ahead, get out of your own way and stop hiding behind fear — it keeps you stuck in the same place and stifles growth.

If investing is new to you, fear and apprehension are normal. Rather than let it hold you back, educate yourself on different investment strategies to build your confidence — when you are ready, start with cheaper, safer investments.

8. Be a Smart Shopper

There’s a definite connection between being a smart shopper and a savvy investor. In one of Mark Cuban’s blog posts on the best investment advice, he explains how cash creates transitional returns. He encourages analyzing how much you spend over the course of a year and then suggested taking advantage of cash, quantity and discounts to get a better return on your money. In other words — it’s best to buy in bulk.

“Saving 15% on $1,000 worth of items you know you will absolutely spend money on is a better return on your money than making 15% in a year on a $1,000 investment because you don’t pay taxes on it,” said Cuban.

Cuban isn’t afraid to march to the beat of his own drum, particularly when it comes to his money and investing. In an interview with Forbes, Cuban stated he rarely takes third-party advice on his investments, thus underscoring an important point: Don’t put all your trust in someone else.

This doesn’t mean you shouldn’t seek guidance from financial advisors. Their insight is invaluable when you’re just starting out and have limited investment knowledge. At the same time, don’t give someone complete control over where your money goes. Learn the ins and outs of investing for yourself so you can have a say in how you invest your money. If you’re just starting out, pick up a book to start learning.

10. Go To the Cheapest School Possible for Your Freshman — and Maybe Sophomore — Classes

College can be an excellent investment in your future and provide the skills and knowledge you need to improve your financial outlook — but acquiring said knowledge isn’t without costs. Cuban offers a cheaper approach: Enroll in a local or community college for the first couple of years of your undergraduate education. Some might argue for the benefits of attending a prestigious school, but Cuban encourages young people to go to a school they can actually afford.

“The most important criteria when choosing a college is affordability,” he tweeted in May 2019. “A community college that offers transferable credits is always smart. There isn’t a lot of value add from big-name schools for freshman or sophomore classes, particularly when a motivated student can augment their studies with free online courses from the big names.”

Cuban knows a thing or two about being disciplined and living frugally — after college, he moved into a house with five roommates, lived off macaroni and cheese, and drove an older vehicle. Rather than invest in expensive belongings, he invested in himself and his future goals. Likewise, a frugal mindset can propel you toward your goals. If you make money and build a nest egg, you’ll have the resources needed to make smart investments.

Live beneath your means and reduce spending to help build your savings. Consider driving an older car, buying secondhand goods, living with your parents a little longer or getting a roommate to lower housing expenses.

Credit cards serve a useful purpose, but they can also lead to debt if you don’t manage them responsibly, which is why Cuban gave this advice to consumers. He doesn’t discourage using a credit card, but he does encourage paying off balances in full every month to avoid wasting money on interest.

“Using a credit card is okay if you pay it off at the end of the month,” Cuban said in an interview with Money. “Just recognize that the 18% or 20% or 30% you’re paying in credit card debt is going to cost you a lot more than you ever could earn anywhere else.”

13. If You Have Credit Card Debt — or Any Debt — Pay It Off Before Making Other Investments

“The best investment you can make is paying off your credit cards, paying off whatever debt you have,” Cuban told MarketWatch. “If you have a student loan with a 7% interest rate, if you pay off that loan, you’re making 7%, that’s your immediate return, which is a lot safer than picking a stock, or trying to pick real estate, or whatever it may be.”

Cuban has long preached that cash is king, and he told Vanity Fair that having cash available can ultimately save you money.

“I tell people all the time, if you’re out, you’re going to take a yoga class, and they want to charge you $30, say, ‘Look, I got $20.’ You know what? They’re going to take it,” he told Vanity Fair. “Negotiating with cash is a far better way to get a return on your investment.”

15. Books Are Always a Good Investment

Although Cuban is an advocate of living cheaply and saving as much as possible, he believes that a good book is the one thing that’s always worth the money.

“I used to love to walk through bookstores when there were bookstores everywhere, and if there was something that caught my eye, and I thought it could give me one idea, to spend $30 to get one idea that could help propel me, make my businesses better — it was a bargain,” he told Vanity Fair.

One book that got Cuban “all fired up” is “The Only Investment Guide You’ll Ever Need” by Andrew Tobias, he said. “I’ll read hours every day because all it takes is one little thing to propel you to the next level.”

16. Keep Your Money to Yourself

Cuban doesn’t seem to believe the old adage, “Sharing is caring.” In an interview with The Dallas Morning News, he advised potential lottery winners to think twice before lending money to anyone. His advice is applicable to anyone who comes across a financial windfall.

For financial advice on money and investing, seek out those with a successful track record. Your chances of a one-on-one session with Mark Cuban are probably slim to none, but this doesn’t mean you can’t benefit from his wisdom. Between his blogs, interviews and Q&A sessions, he’s proven that he’s more than willing to share his money tips with others.

Gabrielle Olya contributed to the reporting for this article.

This article originally appeared on GOBankingRates.com: 16 Genius Things Mark Cuban Says To Do With Your Money

Mon Jul 6 , 2020
PRAGUE (AP) — Tomas Kapler knew nothing about ventilators — he’s an online business consultant, not an engineer or a medical technician. But when he saw that shortages of the vital machines had imperiled critically ill COVID-19 patients in northern Italy, he was moved to action. “It was a disturbing […] 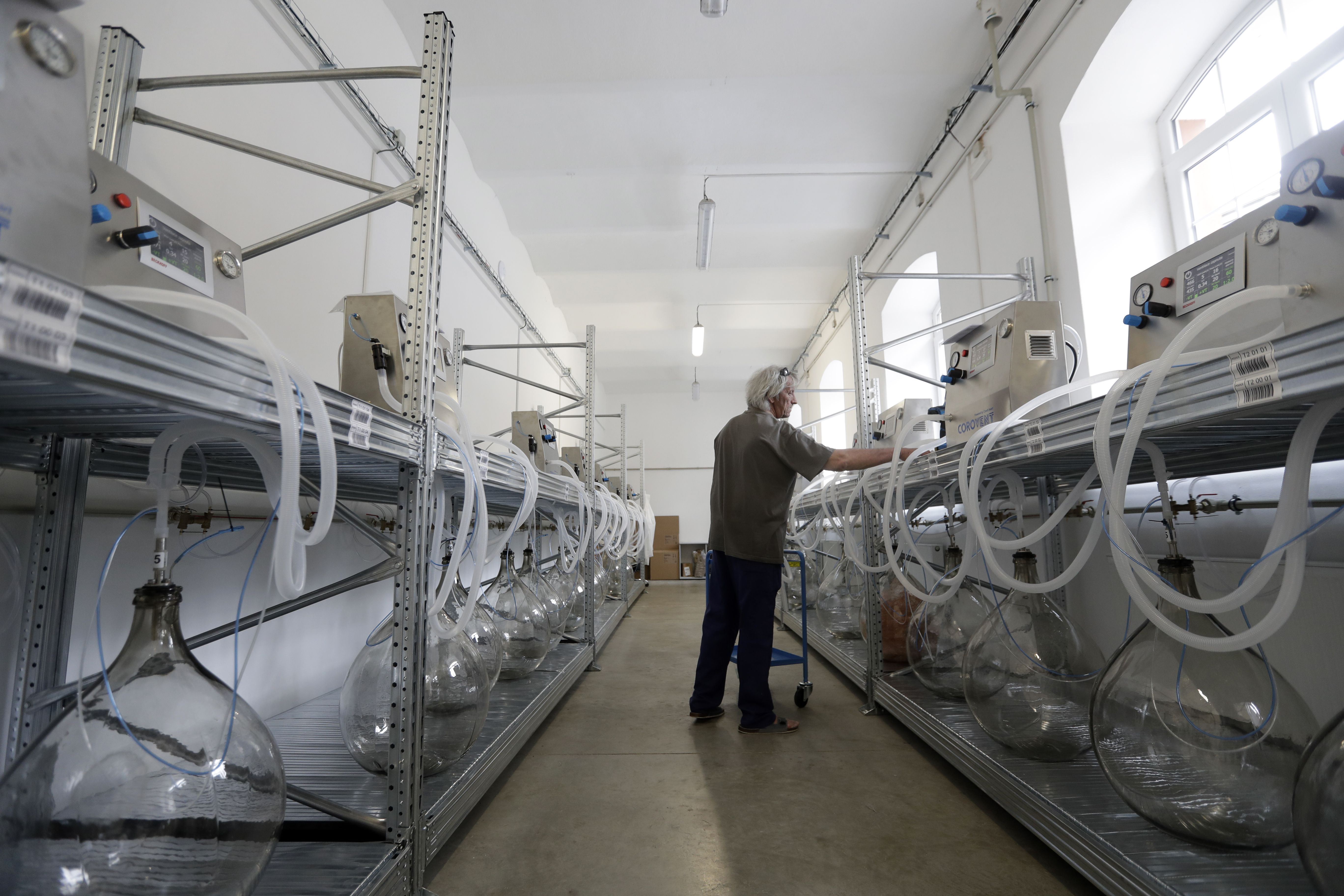