Most online reviews are genuine customer testimonies and valuable tools for shopping the internet. But as most shoppers are aware, there are also fake reviews lurking on platforms like Amazon that can throw you off if you aren’t careful. It’s important to evaluate reviews with a wary eye, to learn how to spot fakes and to make sure, in the end, you use them to help you get what you pay for.

According to the CEO of Fakespot, a free browser extension designed to weed out unreliable product ratings, the number of misleading reviews on Amazon soared in 2020. Fakespot CEO Saoud Khalifah blames the surge in review fraud on Covid-19, which has caused e-commerce to skyrocket and created steep competition for vendors hoping to tap into all that new money coming in.

It’d be a mistake to take online reviews as gospel and use them as your sole criterion for evaluating the quality of a product or retailer. However, you’d also be remiss to completely ignore online reviews when considering a purchase. Below, we’ve put together a guide that should help you get the most out of reviews so they can be a powerful tool rather than a liability.

There are two main kinds of unreliable reviews. The first are bot reviews. Khalifah says computers spit these out in large numbers around major shopping events like Black Friday. While common, these kinds of reviews are fairly easy for third-party algorithms like Fakespot to find and weed out thanks to their awkward, keyword-studded sentences.

The more insidious variety are promotional reviews, which are written by actual human beings who are compensated behind the scenes in exchange for glowing praise.

Khalifah says this type of review tends to primarily plague phone accessories, electronics and smaller appliances — anything that sellers can order in bulk from a factory. However, no product is immune, especially as more shopping moves online.

“There are hundreds of private groups on social media that solicit paid reviews,” says Tommy Noonan, founder of ReviewMeta.com, another tool that aims to provide customers with more accurate product ratings.

Khalifah calls such arrangements a kind of “review exchange club,” where merchants send free products and other forms of compensation to potential reviewers in exchange for positive write-ups. An Amazon spokesperson confirmed to CNN Underscored, “Bad actors use social media platforms to recruit unsuspecting customers by offering free products and gift cards in return for posting fake product reviews.”

This means that even an Amazon Verified Purchase review can be fake. Some reviewers really are buying products with their own money in order to score that trust-building “Verified Purchase” label, only to be reimbursed or compensated further for writing a positive review after.

It’s worth remembering that getting a product for free doesn’t necessarily mean a review is fake. Someone could be sent a product to review and genuinely think it deserves five stars. Still, soliciting or writing reviews without disclosing compensation expressly violates Amazon’s community guidelines as well as FTC guidelines regarding endorsements within advertising.

“We have clear policies for both reviewers and selling partners that prohibit abuse of our community features,” an Amazon spokesperson told CNN Underscored, “and we suspend, ban and take legal action against those who violate these policies.”

In a statement, Amazon said it utilizes “powerful machine learning tools and skilled investigators to analyze over 10 million review submissions weekly, aiming to stop abusive reviews before they are published. In addition, we continue to monitor all existing reviews for signs of abuse and quickly take action if we find an issue. We also proactively work with social media sites to report bad actors who are cultivating abusive reviews outside our store, and we’ve sued thousands of bad actors for attempting to abuse our reviews systems.”

Upvoting and downvoting features can be hijacked not only to make a sparkling review stand out from the pack but also to sabotage competitors by floating negative reviews to the top of a product’s page.

“The ‘most helpful’ reviews can be essentially curated by the brand by paying people to click the ‘helpful’ button on reviews the brand wants at the top,” Noonan says.

Khalifah adds, “You can upvote the most harmful 1-star review, get it on the first page, and now you’ve discouraged the person from buying the product.”

If you’ve ever clicked on a phone case only to find a bunch of reviews for a toaster, then you’ve stumbled onto yet another kind of review manipulation. Merchants buy out well-rated “stale listings” from other vendors, says Khalifah, “swap out the images and details, and voila: They’ve inherited hundreds (or even thousands) of 5-star reviews without a single sale.

“They’re betting on the fact that you’re not actually going to scroll down and look at the reviews and see that they’re actually not for the product,” Khalifah says.

Does all this mean that reviews are useless? Definitely not! Noonan acknowledges that most products do not have a problem with fake reviews and advises people to be skeptical and look out for any suspicious patterns to identify those that do.

Here are some tips to use reviews wisely:

Both Khalifah and Noonan say that simply reading reviews is a big part of not getting swindled. “Don’t just rely on the average rating and review count,” Noonan adds. “Even something with 4.8 stars and 10,000 reviews can be heavily manipulated, hijacked or one-tapped (i.e., rated without writing an accompanying review).”

Noonan also recommends sorting reviews by date, with the newest ones first: “Sometimes product quality changes over time, so scanning through new reviews helps get a sense if things have changed.”

You can’t read everything, of course, which is where tools like Fakespot and ReviewMeta step in. You can use either program as a browser extension (similar to something like Camelizer, which alerts you to changes in an item’s price history), as an app or by just plugging the URL of the product you’re looking at into a toolbar on the companies’ respective websites. Both platforms then use algorithms to detect suspicious patterns in the review write-ups as well as the history of the reviewers themselves. Red flags include things like repetitive phrasing and spikes in the number of reviews being written in a very short period of time.

Fakespot emphasizes the role of language pattern recognition in this process, writing on the company FAQ page, “Linguistics play a huge part in every analysis, but it is far more complex than just looking for certain keywords.” ReviewMeta, for its part, has an entire page devoted to explaining its statistical modeling and the 12 tests it uses to analyze review authenticity.

After running a product page through its algorithm, ReviewMeta presents customers with an adjusted numerical rating based only on reviews that have been deemed trustworthy, along with a more in-depth report on where this number came from. Fakespot, meanwhile, assigns a product a letter grade from A to F that corresponds with review authenticity (with an “A” grade meaning that a product has a higher percentage of reliable reviews than one with an “F” grade). The site has also launched new beta features that highlight review insights for shoppers, including the “most/least positive review.”

These tools are not foolproof. Some users complain about having their legitimate reviews flagged or seeing unreliable reviews squeak through the algorithms. And given that third-party programs like this rely on publicly available review data, they’re going to be more accurate on products with more reviews to analyze.

In a statement provided to CNN Underscored, Amazon said that while it encourages users to use the “report abuse” link button on reviews that seem suspicious, it does not endorse third-party review analysis programs:

“Companies like Fakespot and ReviewMeta that claim to ‘check’ reviews cannot concretely determine the authenticity of a review, as they do not have access to Amazon’s propriety data such as reviewer, seller and product history. […] The fact is they simply do not have access to the information we have and they wrongly accuse reviews from genuine customers who have worked hard to provide valuable feedback so that other shoppers can benefit. That is not to suggest that there aren’t bad actors; we are aware of bad actors that attempt to abuse our systems and we continue to invest significant resources to protect the integrity of our reviews and we will not stop working hard on behalf of our customers and selling partners.”

Here at Underscored, editors frequently utilize these programs to help analyze public sentiment around a product. We do not, however, view their findings as absolute. We recommend consumers also use them but with a similarly wary eye, and as but one tool among many.

Khalifah also recommends looking to YouTube or other video reviews where you can see reviewers actually using the physical product. And, of course, websites like CNN Underscored do extensive research and hands-on testing before recommending products to readers.

Take the number of reviews a product has with a grain of salt. Something like a phone charger with 30,000 reviews should probably raise a few eyebrows regarding review authenticity, Khalifah believes, because it’s the kind of thing that simply “works or doesn’t work.” When you look at numbers like that, he says, you should ask yourself, “Wait, who’s gonna write a review about a battery pack?”

Finally, Noonan says, “Always, always, always return products when you feel like you’ve been swindled. Amazon has a great return policy, and this sends a strong financial message to both Amazon and the vendor that you will not tolerate low-quality products that are propped up by manipulated reviews.”

Mon Oct 19 , 2020
Chipotle Mexican Grill Inc.’s efforts to build its digital and delivery business will pay off well into the future, analysts say. Chipotle CMG, -0.30% is scheduled to report third-quarter earnings on Wednesday after the closing bell. Chipotle has talked about its digital efforts at length in previous earnings reports. KeyBanc […] 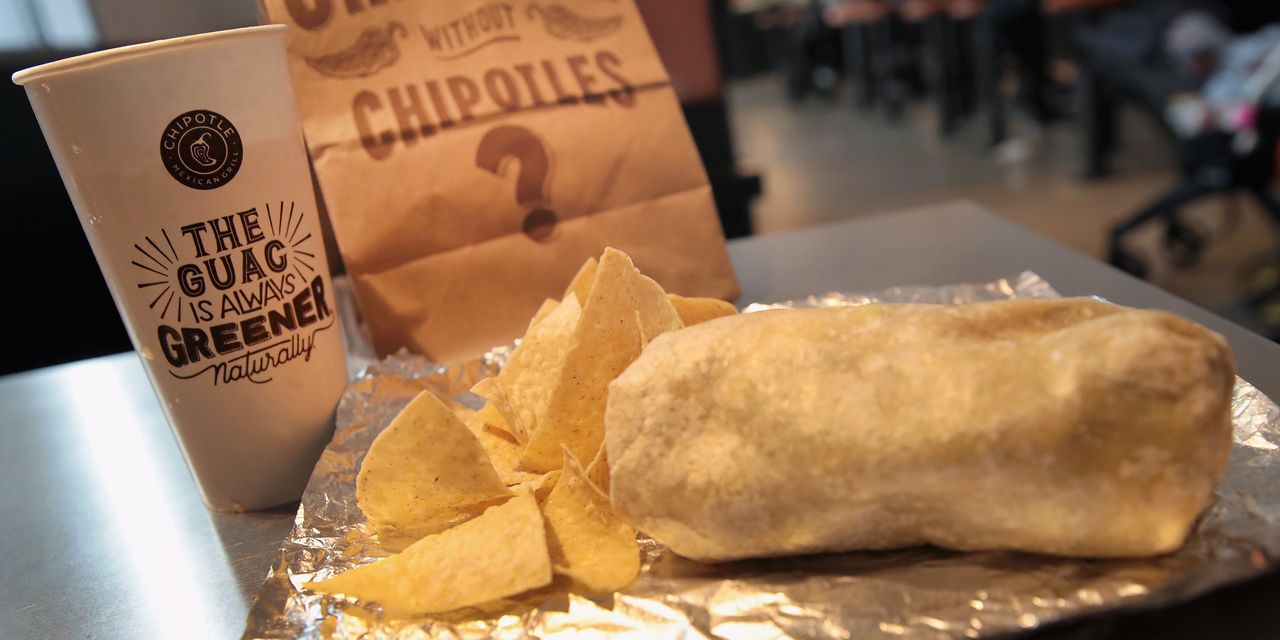