Amazon plans to open a warehouse in Westhampton Beach to make “last-mile” deliveries on the East End, its fifth such facility in the region, officials said on Thursday.

The online retailer would rent a 91,000-square-foot building to be constructed by developer Rechler Equity Partners near Gabreski Airport, the developer’s attorney and an Amazon executive said during a meeting of the Suffolk County Industrial Development Agency.

The IDA board on Thursday gave preliminary approval for $2.3 million in tax breaks to support the warehouse’s construction and outfitting. The incentives include a $818,300 reduction in property taxes over 15 years, or a 53% tax savings.

Amazon economic development manager Brad Griggs said 50 people will work at the last-mile warehouse within two years, excluding the truck drivers who bring packages to the facility and van drivers who deliver them to customers. The delivery personnel are independent contractors, he said.

“We can commit to having 50 full-time employees year-round, but we will take on more people during our peak season” of November-December, Griggs told IDA board members, adding that the number of full-time workers could increase to about 100 with more consumer orders. “We could potentially increase [employment] to the levels at Shirley,” he said.

Amazon has said it plans to have more than 100 employees at the 100 Precision Dr. warehouse in Shirley, which opened last month.

In Westhampton Beach, Amazon employees would earn, on average, $34,100, per year — about the same amount as those who work at the Shirley facility, according to the application for IDA tax breaks.

The latest LI business news in your inbox Monday through Friday.

The incentives OKd on Thursday still must win final approval from the IDA board after a public hearing.

Besides the Shirley location, Amazon has a last-mile warehouse in Bethpage and plans for one at a former Waldbaum’s supermarket in Carle Place and the old Cerro Wire site in Syosset. The warehouses are designed to operate around the clock, with most employees working overnight, Griggs said.

Amazon, together with the developers of the Syosset property, has requested more than $3.3 million in tax breaks from the Nassau County IDA to support construction of a 204,000-square-foot warehouse. That project would create 850 warehouse and delivery jobs, according to Oyster Bay Town Supervisor Joseph Saladino.

The Nassau IDA board was to vote Thursday night on whether to enter into negotiations with Amazon and the Syosset developers for a tax deal.

The retailer’s Westhampton Beach warehouse would be the fourth building to be constructed in a new industrial park, called the Hampton Business District. The warehouse would cost $36 million to construct and furnish, Amazon contributing $7.5 million, said Suffolk IDA executive director Anthony J. Catapano.

Suffolk designated Rechler to develop the industrial park in 2009. The other buildings have secured IDA tax breaks.

The tax savings is passed to tenants, such as the retailer Restoration Hardware, cookie manufacturer Tate’s Bake Shop and air conditioning giant Carrier. The county owns the airport and land on which the buildings sit.

“Without a doubt, the proposed Amazon warehouse and distribution facility is the reason the park was created,” Rechler’s real estate attorney Guy W. Germano said on Thursday.

Amazon didn’t apply for tax breaks for its Shirley facility or the one planned for Carle Place.

The warehouses make last-mile deliveries to customers’ homes and businesses.

James T. Madore writes about Long Island business news including the economy, development, and the relationship between government and business. He previously served as Albany bureau chief.

Fri Oct 23 , 2020
To address shopper worries about coronavirus this holiday season, Target Corp. is implementing new and enhanced measures to make in-store and online purchases faster and safer. Target said Thursday that, on the safety front, customers can now use the Wallet mobile payment option in the Target app for contactless self-checkout […] 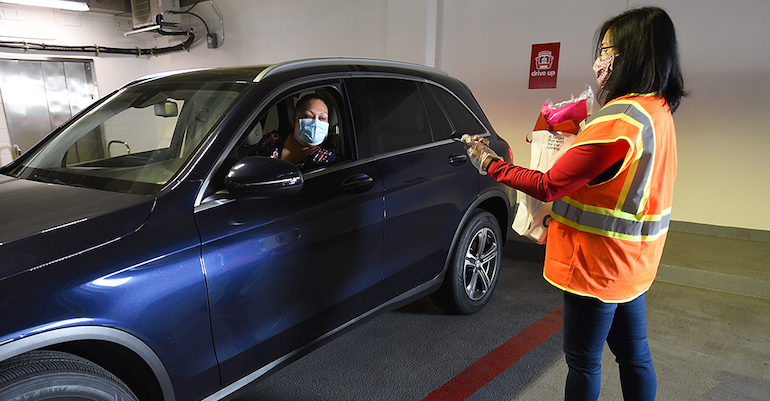