WASHINGTON — One month into the school year, Linnet Early, a social studies teacher outside St. Louis, has an anxious new ritual: scanning the Zoom squares on her computer screen at the beginning of each class to see which of her sixth-grade students are missing. It is usually quite a few.

“I’ll have kids gone for a week, pop in for one class the next, then miss the second class that week,” said Early, who has 100 mostly low-income students spread across eight classes, all online. “It’s hard to know what their struggles are, how to wrap your arms around it.”

Around the country, teachers and school administrators are hoping that a patchwork of plans cobbled together over the summer will help address one of the most pressing challenges they face as millions of students start a new school year online: How to make sure they come to virtual class, and what balance to strike between punitive and forgiving policies if they don’t.

Attendance data from last spring, while limited, suggests that the problem loomed large in many districts after school buildings closed in mid-March. In one survey of 5,659 educators around the country, 34% of respondents said that no more than 1 in 4 students were attending their remote classes, and a majority said fewer than half their students were attending.

Disengagement was especially high in poorer communities, including many urban school systems. In Seattle, elementary school students logged into the learning portal less than half of the time, on average. And in Los Angeles, the nation’s second-largest school system, a quarter of students were not logging in at all in May.

Early data from the new school year suggests that the problem persists. By the end of the first week of school in Detroit — where learning is mostly being conducted virtually — 78% of students had shown up to class, compared with 90% by that point last year.

Data on why students disappear from virtual school is hard to come by, but there are some obvious explanations. Many lack a computer or stable internet; others have to work or care for younger children; some families were evicted and had to move.

“Some of these issues are largely beyond the reach of schools to address,” said Justin Reich, director of the Teaching Systems Lab at MIT, who has been studying remote learning during the pandemic.

“If all the adults in the house lose their job and the only person who can work is in high school and is assigned shifts during the day, it’s not that schools are totally powerless to address that situation,” he said. “But you’re asking schools that are already under tremendous strains to take on responsibilities that are probably better addressed by other forms of social policy.”

It is also likely that some students found online learning so tedious or hard to keep up with that they just dropped out, especially since many schools stopped grading or taking attendance once they closed their doors.

Most states are pushing school districts to return to normal attendance and grading policies this fall, now that they have had some time to improve their distance learning programs. That is putting pressure on schools not only to keep students engaged but also to keep tabs on their personal circumstances and emotional health.

“There’s no question states have moved from treating remote learning as a special-case scenario in the spring, when they let up on expectations, to saying now, ‘You need to go back to business as usual,’” said Bree Dusseault, a researcher at the Center on Reinventing Public Education, which is tracking distance learning around the country.

Returning to normal attendance expectations has sharpened a debate among education officials about how to approach truancy. Last spring, Massachusetts school officials reported dozens of families to the state’s Department of Children and Families because of issues related to their children’s participation in remote learning, The Boston Globe reported last month. Districts with large Black and Latino populations filed the most reports, the paper found.

“When they come in for an investigation, there is always a possibility of your child being taken away,” said Meri Viano, associate director of the Parent/Professional Advocacy League, a statewide group that has been in touch with parents who have been reported, although she added that she had not confirmed any instances of that happening as of yet. “That, to me, is a huge unnecessary risk for families that are in crisis in this pandemic.”

But Hedy Chang, the director of Attendance Works, a national group that promotes solutions to chronic absenteeism, said many districts had in fact eased up on harsh truancy rules — which can involve fines and even jail for parents and, sometimes, students — during the pandemic out of concern that students had legitimate obstacles to attending class.

“I do think more schools are open to the notion that you need alternatives to legal action,” she said. “There’s a lot more empathy.”

In Washington, D.C., public schools this fall will send “We Miss You” postcards to students who skip virtual class and call not just parents but other relatives and emergency contacts to track them down. In California, a law passed in June requires school districts to develop “re-engagement strategies” for students who go missing from distance learning. And in Mississippi, schools will dispatch attendance officers to the homes of students who don’t show up for online instruction.

Reich of MIT said that on the plus side, schools know which of their students are least likely to engage in distance learning this fall based on what happened in the spring. The bad news — “a recipe for disaster,” as he put it — is that unlike in the spring, most teachers will have no existing relationship with their students and it will be hard to establish one-on-one bonds when everyone is remote.

When MIT researchers interviewed teachers about distance learning in the spring, Reich said, “One said she could text kids and harass them to participate ‘because they know I love them. But how will it work in the fall when the students don’t know I love them?’”

Even six months into the pandemic, the technology needs among lower-income students cannot be overestimated. In Washington, about 60% of the 32,000 families who responded to a survey over the summer said they needed a digital device, and 27% said they needed internet access. In Mississippi — which has the highest child poverty rate in the nation, at about 28% — Carey M. Wright, the superintendent of education, said the state Legislature had allotted $200 million to ensure every student has a device this school year. But because of high national demand, some will not receive it until November.

Still, Wright said she felt strongly about returning to normal truancy rules this school year. Students will be counted absent if they miss more than a third of the required four hours of daily instruction during remote learning, she said, although they cannot be held back at the end of the year based on absence alone. That calculation is harder to make with students who do not have internet access and instead get printed packets of assignments to complete on their own each week, never interacting with a teacher.

“The most important thing for us is to make sure students are engaging in learning, and we needed to put some teeth behind that,” Wright said.

Some districts were better positioned than others to quickly intervene when students stopped showing up during the pandemic. Long Beach, California, a district of 81,000 students, won a grant last year to help students at risk of becoming chronically absent and had been honing interventions before the pandemic set in. Erin Simon, an assistant superintendent, said that instead of warning letters for missing too much school this year, students would get “re-engagement letters.”

“When a student misses a day or a period, we are asking staff to reach out to the family to ask, ‘Is everything OK? Are there any barriers we can assist you with?’” Simon said.

Kareem Farah, executive director of the Modern Classrooms Project, a nonprofit group that has trained more than 16,500 teachers over the past six months to make instructional videos for students, said one key to keeping students engaged was offering as little live instruction as possible. Instead, he said, teachers should use online time for bonding with students.

“If you use live class time to lecture, a lot of kids aren’t going to show up,” Farah said. “If you use it to engage them, to talk, to share, that totally changes the game. It makes kids eager to show up to class.”

Nicole J., a high school art teacher outside San Diego, said only a little more than half of her students show up regularly to live online class, although most have participated in at least some capacity; 9% have not attended at all in the four weeks since school started. She asked that her full name not be used because she had not sought approval to speak.

“I have been emailing, texting and calling home personally,” she said. “I have some students who I know are living across the border right now. Another is watching her 2-year-old sister all the time — that’s incredibly hard, to get anything done. Some have gotten jobs and are trying to fit school in around their work schedule.”

Many teachers are hoping to build on strategies that they tried last spring. Jennifer Donovan, a middle-school teacher in southern New Jersey who said about a third of her students did “little to no work” after remote learning began in March, said her school staff was having daily meetings to discuss attendance and using “phone calls, spreadsheets, rubrics” to track down missing students.

Pam Sheerhan, who teaches fourth grade in a poor neighborhood of Columbus, Ohio, said that when the building closed last spring she exchanged phone numbers with parents and called them if she did not see a student in online class or was not getting work from them.

This fall, Sheerhan plans to go further, with home visits to welcome each student to her class and additional visits as the weeks go by to continue keeping tabs on them.

“I think I can do this on their front lawns and keep a distance,” she said. “I won’t get to every student every week, but possibly visit five per week.”

Keeping track of who shows up during the first few weeks of virtual school will be particularly important, said Chang, of Attendance Works.

“We are trying to recreate school in a way we’ve never done before,” she said. “What is our early feedback loop about how it’s working? I would argue whether a kid shows up is a key indication of that.”

Tue Sep 22 , 2020
The Bandcamp team at their annual meetup in Arizona. (Richard Morgenstein) Like thousands of artists, Nashville singer and songwriter Emma Swift faced a reckoning in March after all of her gigs were scrapped. “When the pandemic hit, I lost my job as a touring musician. And in losing that job, […] 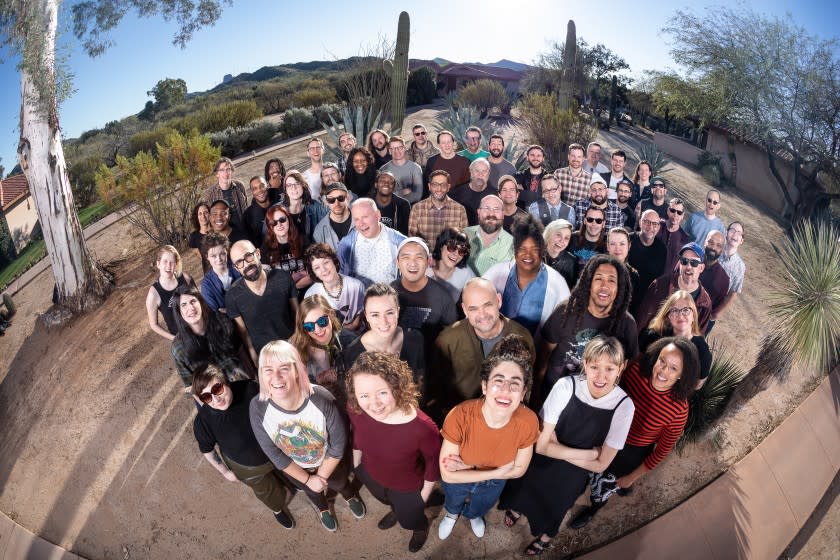