The British gambling group confirmed it received approaches from both U.S. companies after Bloomberg reported Apollo’s interest on Friday. William Hill shares fell 12% to 275.9 pence as of 10.18 a.m. in London — close to Caesar’s bid of 272 pence — as investors reined in expectations of a hefty counteroffer by the private equity firm.

Caesars and William Hill have a U.S. joint venture with 20% and 80% equity ownership respectively. The two were already in discussions about merging some of their operations in the U.S., where the British bookmaker is looking to expand following the legalization of sports betting by the Supreme Court in 2018.

Caesars said the joint venture “needs to be broadened in scope in order to fully maximise the opportunity in the sports betting and gaming sector.”

However, it warned it could pull out of some of the partnerships with William Hill if it loses the battle with Apollo. That would risk cutting off the British company’s access to the crucial American market.

Caesars’ statement also outlined a potential break-up strategy. It said its focus would be on William Hill’s U.S. assets and it would “seek suitable partners or owners” for the other businesses such as the U.K. if its bid prevailed.

William Hill’s home market has been hit with regulations like stake limits on betting machines — a rule which rendered hundreds of its stores unprofitable and led to 700 being closed. Further tightening of U.K. gambling rules is being considered, while William Hill’s recent earnings have also been hit by Covid-19 shutdowns of sports events and the remaining stores.

Its market value has been eclipsed by European peers also shifting aggressively toward the U.S. and online gambling.

Hedge fund HG Vora Capital Management LLC owns around 8% of William Hill, having recently increased its holding, a person with knowledge of the matter said Friday.

Apollo made its initial written proposal for William Hill on Aug. 27, then both the buyout firm and Caesars made further approaches, William Hill said in Friday’s statement. The suitors have until Oct. 23 to announce they intend to make a firm offer or walk away under U.K. takeover rules.

It has a history of investments in the gambling sector. It teamed up with TPG for a 2008 leveraged buyout of Harrah’s Entertainment Inc., which was later renamed Caesars. Last year, it also acquired a stake in Italy’s Gamenet Group SpA.

The danger in postponing cancer screenings during the pandemic

Mon Sep 28 , 2020
Dr. Pulin Sheth reads a mammogram at Keck Medicine of USC. (Ricardo Carrasco III / Keck Medicine of USC) During the COVID-19 pandemic, a distressing downturn has occurred — cancer screenings dramatically decreased across the country. Early detection of cancer can improve the chances of survival. By delaying screening, patients […] 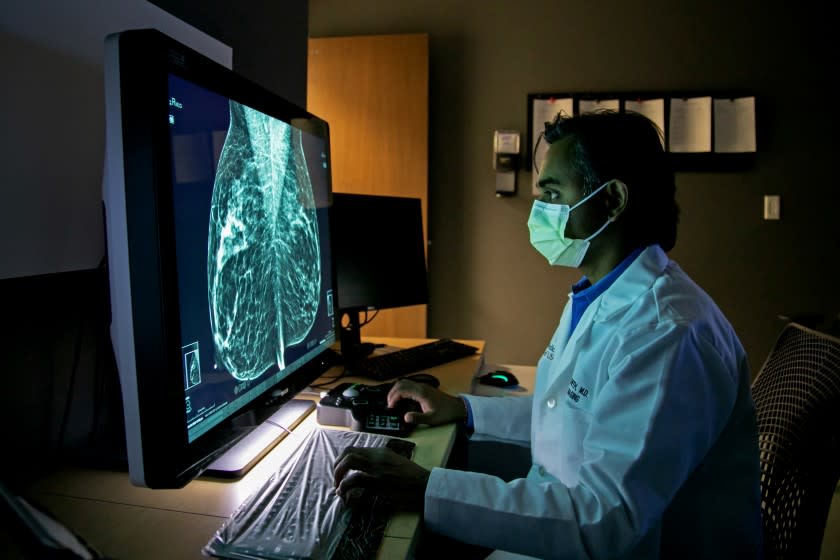