They took a pay cut amid a pandemic that has infected more than 3,500 prison employees, killing nine.

The Department of Corrections and Rehabilitation announced Friday it will close a state prison in Tracy, affecting 469 correctional officers’ jobs, in what could be the first of two closures under Gov. Gavin Newsom.

And some officers feel targeted by the recent public outcry over police killings.

Against that backdrop, their union president announced a new initiative this month to try to regain the political might for which the California Correctional Peace Officers Association was once known.

“Today, we recognize that it is time for us to return to the days of old, when we had a much larger footprint in California politics and were referred to as the ‘800-pound gorilla in the rooms,’” president Glen Stailey said in this month’s edition of union publication Peacekeeper.

The politics of public safety in California have changed since the 1990s, when the union reached its pinnacle while pushing tough policies amid a spike in crime. Some experts question whether Stailey’s push — which his announcement suggests will take a similarly tough stance on crime — can find success today.

“They’re not going to get traction in today’s society without the political backing of the people,” said Robert Hawley, a labor relations expert who used to teach at McGeorge Law School. “They need to turn the corner somehow on what’s happened with the electorate in the last few years.”

The state’s violent crime rate is historically low, affecting fewer than 500 per 100,000 residents, down from its 1992 peak at twice that rate, according to a Public Policy Institute of California analysis of FBI and Department of Justice data.

Public sentiment has been changing, with voters approving ballot initiatives in the last six years allowing some low-level crimes to be reclassified from felonies to misdemeanors and expanding early release from prisons for good behavior.

For a moment, the correctional officers’ union seemed poised to move in the same direction.

Last September, union officials traveled to Norway with Department of Corrections and Rehabilitation leaders to tour the country’s dormitory-style institutions, considered models of the rehabilitative approach.

The shift appears to have been short-lived. Stailey, who went on the trip, said in this month’s announcement that the union is “headed into a different direction.”

Work for the state of California? Get the latest news on pensions, pay and more in the State Worker newsletter.

Shortly after his announcement in Peacekeeper, the union posted a political ad online that showed crosshairs over a photo of Black Democratic state lawmaker Reggie Jones-Sawyer, chairman of the Assembly Public Safety Committee.

Jones-Sawyer has supported a range of changes to the criminal justice system including proposals to eliminate mandatory minimum sentences for drug possession, prohibit discrimination against ex-prisoners and bolster rehabilitation programs.

The union took down the ad after the media reported on it and advocacy groups raised concerns about promoting violence, but CCPOA has only accelerated its spending to help Jones-Sawyer’s opponent, Efren Martinez, in the race for the Los Angeles-area seat. The union’s political action committee has spent about $420,000 on the race in the last two weeks alone.

Stailey said in a statement that the ad wasn’t intended to suggest anything more than the union’s plans to “target” certain legislative districts.

Stailey’s message to members doesn’t go into detail about his plans. It references union founder Don Novey, saying, “for those of you who were around or heard about the ‘Novey days,’ no more needs to be said.”

The union represented about 2,600 prison guards when Novey formed it in the 1980s. Using a combination of campaign contributions, legislative lobbying and lawsuits, Novey grew the organization’s numbers and its power.

Today the union represents about 27,000 officers. They still enjoy many of the benefits won through bargaining under Novey, including one of the highest annual average correctional officer salaries in the country, a generous pension formula that allows them to retire at age 50 and strong seniority privileges.

Novey retired in 2002 and was succeeded by Mike Jimenez, who led it through a difficult relationship with Gov. Arnold Schwarzenegger before retiring at the end of 2014. Stailey is the third president to hold the leadership spot since Jimenez left.

The short tenures have been accompanied by some head-scratching political moves.

Chuck Alexander, who came after Jimenez, contributed $2 million to a tough-on-crime ballot initiative on his way out the door in December 2018. In line with CCPOA’s earlier priorities, the initiative would increase penalties for theft-related crimes and make it harder to release prisoners early.

Kurt Stoetzl, who came after Alexander, asked for the $2 million back. The union was preparing for contract negotiations with Newsom, who has advocated for a boost in rehabilitation.

Campaign finance records for the initiative don’t show the $2 million has been returned to date, but the union quickly reached a deal for a 3% raise in the first contract Newsom’s administration reached last year.

This spring, under Stailey, the union made an unusual foray into international politics, urging Democratic U.S. Sen. Dianne Feinstein to change her position on international aid for Iran and align herself with President Donald Trump on the issue.

All state employee unions face tricky decisions when it comes to politics. All the more so for those unions with contingents of rural blue-collar workers in a state whose elected representatives are overwhelmingly Democratic.

One school of thought, embodied by Novey, advocates for political muscle and finesse. Another promotes sticking to pay, benefits and working conditions to minimize divisions and distractions.

While the union hasn’t stopped spending heavily to support candidates up and down the state in both parties, Stailey’s shift moves more aggressively toward the former strategy.

His approach could play well with members, said Hawley, the former McGeorge professor.

“Unions are responsive to their membership, and correctional officers, police officers, law enforcement officers are taking a beating in today’s environment politically,” he said. “And you have to do something to show that you are on top of this and doing something about it. So that’s a possibility.”

The union’s strong rate of dues-paying members — nearly 99%, according to State Controller’s Office data from August 2019 — suggests it is working to retain, not recruit.

Yet as those in power continue to move away from a tough-on-crime attitude, Stailey could be missing an opportunity, said Matt Cate, who was CDCR secretary under Schwarzenegger.

California currently has 93,037 inmates in prisons and correctional camps, down from 114,318 in March and from 117,666 in August 2019. It plummeted because of early releases in the coronavirus outbreak, and it’s not expected to rise quickly.

Cate, who says California built the “wrong kind of prisons,” said the Norway model of rehabilitation requires a “richer staffing model” that could present opportunities for better pay for correctional officers if they undergo new training.

“We should have all members of staff involved in the rehabilitation of inmates, including CCPOA’s membership,” he said.

Polestar is actually going to make the Precept, its eco-conscious concept car

Mon Sep 28 , 2020
Polestar has confirmed that its futuristic Precept concept car will not remain a vision of the future, but will go into production. The Polestar Precept was unveiled back in February, and served more as a tool to demonstrate to the world what Polestar was all about ahead of delivering its […] 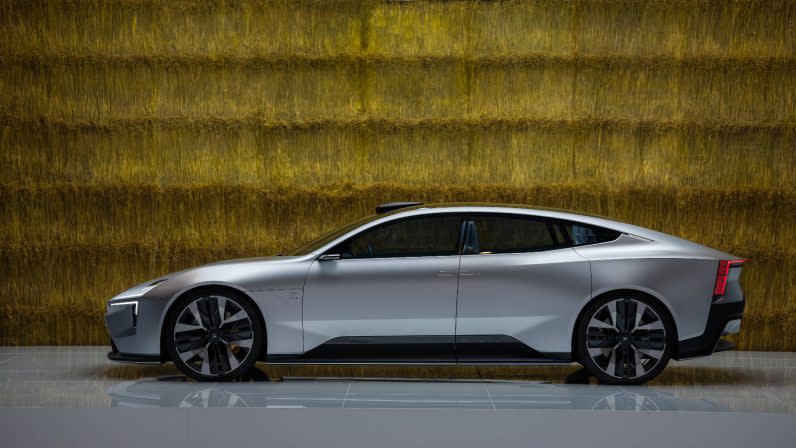