When the coronavirus began ravaging New York City, Chenghui Zhang’s parents begged her to return to China. But Zhang, who is 25 and also goes by the adopted first name Helen, would not leave her adopted home of nearly seven years.

“It was very scary, but I told them that it was better for me to not move for now,” Zhang told The Daily Beast on a Zoom call. “I said, ‘It’s even more dangerous if you go to the airport.’”

Zhang’s mother, Limin Chen, lives in Beijing, where she has been spared the worst of the pandemic. She has been quarantining with her twin sister and tending to a small backyard garden. After the country lifted national travel bans, Chen went on a few trips. “She’s gone places with a few friends,” Zhang said. “She’s having more fun than I am.”

Zhang considers her mom a role model, the type of strong-willed and independent woman she has in mind when designing for her clothing line, Social-Work. They have not seen each other since last November, but Zhang hopes they will reunite next spring “after everything gets better.”

Like many New Yorkers—the ones who aren’t complaining about how dead the city is in whiny op-eds—Zhang stayed in her Brooklyn apartment when the city shut down in March. Though the designer was born in Italy and spent her high school years at a British school in Shanghai, she has only ever wanted to live in this city.

“It feels like home to me,” Zhang said. “I always wanted to come to New York because it is a very international place. It’s part of the dream to be here.”

An extension of the fantasy: Social-Work nabbing a spot on the CFDA’s New York Fashion Week schedule. Zhang’s spring collection is inspired by the 1976 Éric Rohmer film La Collectionneuse, about a young woman who wields sensuality on her own terms while wearing an of-the-era avocado green sweater, pixie cut, and mustard yellow bikini.

“During the pandemic, I got very nostalgic,” Zhang said. “I thought about things that happened before the lockdown, going to movies with my friends, traveling with my parents, doing this and that. I realized how the things I took for granted are very precious. So I named the collection ‘A Dialogue to Introspection,’ which is me talking to myself and feeling nostalgic.”

When Zhang began Social-Work in 2018 with her fellow Parsons grad, Qi Wang, the pair made unisex clothing. (Zhang has full creative control now—Wang left the brand two years ago.) After learning that “80 percent” of her shoppers are female, Zhang updated her shop to be “mostly womenswear—for girls who still want some coolness, edginess in their wardrobe.”

“Most of the [spring collection] is very comfortable—knits, washable silk,” Zhang said. “It’s very easy to wear and doesn’t really have a size. It has elastic. Moving forward, people might not need to go to an office and they can stay at home. So how do you make them feel comfortable, but nice, so they’re not wearing pajamas everyday?”

Zhang is someone who might be working from home forever. During quarantine, her studio lease ended and she began designing from home.

“I thought it would be better to combine my working and personal space,” she said. “This has been my first experience working remotely. I’ve outsourced a lot of my operations overseas. So I’d show people my sketches [virtually] and they’d send me swatches. It’s been a new way to manage myself.”

The pandemic has forced on Zhang, like so many others, adoptability. She spoke of having to nimbly change plans and put projects on hold. Around March, Social-Work and the beer company Tsingtao were planning a capsule line, marking the launch with a pop-up restaurant.

When COVID forced businesses to shutter, Zhang decided to donate the line’s profits to Asian American-owned restaurants. Fifteen percent of the earnings from the upcoming NYFW collection will go to aid immigrant artists in the city.

“We want to be relevant to what’s going on around us,” Zhang said, speaking as a Chinese expat living in a country whose racist president dubbed the virus the “Kung Flu.”

“It’s been intense,” Zhang admitted. “In the beginning of the pandemic, I noticed people being very rude to me [as an Asian woman]. People would look at me on the subway [because] the government was saying, ‘this is the China Virus,’ or whatever.”

She feels like she did not face the worst of it in Brooklyn. “[Microaggressions] would happen, but I don’t feel like it’s very normal in New York, because everyone is so international,” Zhang said. “The political climate right now is so sensitive, and I guess living through this helped me to really understand American culture. Before, I didn’t know that much about it because I was at school and had a foreigner perspective. I’ve become more educated and started to understand more during this time.”

Despite her cinematic inspirations and habit of putting models in sweeping, wide leg trousers, Zhang does not come off as a dramatic person. On a Zoom call, she wore all black and had her hair up in a neat ponytail. The walls of an apartment she shares with a friend from college are bone-white. She was first drawn to the fashion not for its glamor, but out of an appreciation for its history and attention for detail.

She describes herself as “kind of a nerdy” art student. “I feel like I escaped into a fantasy whenever I was painting,” she said. In high school, she had to choose an elective: interior design or fashion.

“I saw portfolios from other students, and it was fascinating to see how much research went into them, that just surface-level stuff,” Zhang said. She thought about attending Central Saint Martins in London, but did not want to commit to the British education system, which makes incoming applicants commit to a field of study.

“I wanted to study fashion in America because basically you can do anything,” she said. “You don’t need to choose a specific major. I thought, ‘Maybe I’ll do art, maybe I’ll do business.’ Fashion is the perfect balance of both.”

Zhang said her professors at Parsons encouraged her to “challenge the system” rather than follow trends. During her sophomore and junior years, she worked at a couture atelier. She watched as the artisans in those workshops, many of whom were immigrants or first-generation Americans, clock painstaking hours sewing garments by hand.

“A lot of them have their own characteristics,” she said. “There was a woman I remember, also named Helen, who liked pretty dresses. She would dress up herself. So she had the perfect touch for making these dresses. When you see a garment, you don’t see it as something that was made by someone who put in real effort. You see it as merchandise, or a commodity.”

Haute couture clients might appreciate such craftsmanship, Zhang thinks, but the rest of us who put on ready-to-wear often ignore it. “At the end of the day, clothes are made by human beings,” she said. “Especially when you’re talking about an independent designer like me—I don’t have the resources to do mass production.”

Since the beginning of Social-Work, Zhang put her garment workers front and center. Some of them walked as models for the debut runway show. Each piece of clothing has a barcode, and shoppers can look it up on the brand’s website to learn more about the people who made the item. “We want to bring the workplace to the people who don’t understand what that looks like,” Zhang said.

Since Zhang’s NYFW show must be digital this year, she enlisted friends to wear the clothes in a short film. “They’re going to talk about who they are, where they’re from, their heritage,” she said. “We’re always talking about individuality, rather than focusing on the model as someone who just wears clothes. They also have a personality, a character, a value.”

Zhang shrugged off the fact that other young designers like Kerby Jean-Raymond and Telfar Clemens ditched NYFW this year. “It’s just a calendar,” she said. “It’s just a time to showcase your stuff. It makes perfect sense for me to do it. What matters is the content you’re putting out there, and that you’re trying to do something different.”

Social-Work is also sold in China, and Zhang said that sales bounced back almost immediately after the country began rolling back its intense lockdown. “I’m very surprised by how well we’re doing—we have double the sales we did in previous seasons in China.”

Not so much in her adopted home. “I have realized how different American and Chinese consumers are,” Zhang said. “Here, people are willing to buy things only if they have paychecks. In Asia in general, people have more savings. People in China suppressed their needs during that quarantine, so when things opened back up, they just went shopping. There’s also not much else they can do—they can’t go traveling, they can’t go to parties, they can just go online to buy stuff.”

Another silver lining in a very non-traditional fashion week: Zhang’s mother can watch the virtual presentation in real time. Though she’s not the most glamorous person, Zhang says her mother is always happy to give advice on business.

“She understands how to be a consumer, even if she doesn’t get what fashion is,” Zhang said. “She’ll say, ‘I can wear this!’ or ‘I can’t wear this!’ or ‘Where would anyone ever wear this?’ It’s very blunt and direct, which I appreciate. By the end of the day, people have to wear your stuff. You’re making something someone is supposed to use in their daily life.”

Want to buy shares online? Here’s how to get started

Sat Sep 12 , 2020
Photograph: Westend61/Getty Images It has been a miserable time to be a saver – interest rates, which were already poor, have fallen further since the Bank of England cut its rate to a record low. At the same time, workers lucky enough to have kept their jobs during the coronavirus […] 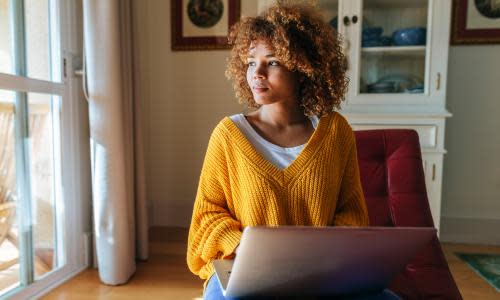