The outbreak of the coronavirus has dealt a shock to the global economy with unprecedented speed. Following are developments Tuesday related to the national and global response, the work place and the spread of the virus.

— Overall retail sales are expected to fall this year, but there’s one bright spot: online shopping. E-commerce sales are expected to rise 18% this year, with most of that spending going to Amazon and Walmart, according to market research firm eMarketer. The increase was helped by the popularity of services like buy online and pick up curbside. The pandemic has also forced some to shop online for the first time: online shopping among those 65 and older is expected to rise 12% this year.

— The recovery for U.S. restaurants is stalling as coronavirus cases increase in many states. For the week ending June 28, customer transactions at major restaurant chains were down 14% versus the same week a year ago, according to The NPD Group. It was the second week in a row that demand fell from the previous week.

— Seeing more Charmin on the shelves? That’s because U.S. household toilet paper sales have returned to their pre-pandemic levels, according to NCSolutions, a market research company. Toilet paper sales were up 1% over last year through Feb. 23. As panic buying began in early March, that jumped to 54%. Between March 11 and March 21, sales skyrocketed 194%. But by the end of June, toilet paper sales were up just 6% from a year ago. Sales of napkins, paper towels and facial tissues folloed a similar trajectory, the company said.

— Novavax has been chosen to participate in Operation Warp Speed, a U.S. government program that seeks to begin delivering millions of doses of a safe, effective vaccine for COVID-19 next year.

Novavax has received $1.6 billion from the federal government to complete late-stage clinical development, including a Phase 3 clinical trial; establish large-scale manufacturing; and deliver 100 million doses of NVX‑CoV2373, its COVID-19 vaccine candidate, as early as late 2020.

— Regeneron Pharmaceuticals has received $450 million through Operation Warp Speed to make and supply its COVID-19 vaccine candidate, REGN-COV2. The agreement supports continued manufacturing so that the product could be made available immediately in the U.S. if clinical trials are successful and the U.S. Food and Drug Administration grants Emergency Use Authorization or product approval.

— LabCorp is launching an at home COVID-19 test collection service. The service allows a doctor to directly order a test collection kit for their patient through a digital interface with LabCorp. Once the order is placed, LabCorp will send the kit to the patient, who will perform the sample collection using a nasal swab and send it back to LabCorp via FedEx. LabCorp then delivers the patient’s test results to the healthcare provider’s electronic medical record and the patient’s LabCorp Patient Portal. The result provides the doctor the information needed to make the appropriate clinical decision before proceeding with surgery or other treatment.

— Air travel in the U.S. continued its slow rise around the July 4 holiday weekend, with more than 700,000 people being screened at airport checkpoints over the three-day period, according to government figures. Those are the highest numbers since March 18 but are still down about two-thirds or more from a year ago.

— Five more airlines have reached tentative agreements on additional government loans to help them survive the pandemic. The Treasury Department said Tuesday Delta, United, Southwest, Alaska and JetBlue signed letters of intent. That doesn’t mean they will draw on the loans. Amounts were not disclosed. Last week, American, Spirit, Frontier, Hawaiian and SkyWest signed letters of intent with Treasury.

— United Airlines is telling employees that it will send notices to tens of thousands of them this month about potential job cuts, a step companies are required to take before mass layoffs. Last month, Delta notified 2,500 pilots they could get layoff notices. Airlines can’t furlough workers until October under the terms of $25 billion in federal payroll aid that they accepted. But layoffs in the fall are widely expected.

— Royal Caribbean and Norwegian have formed a panel to develop new health and safety standards for ships. The panel will offer its initial recommendations by the end of August, and its work will be shared with the rest of the industry.

— The Dubai Financial Market, the sheikhdom’s stock exchange, has reopened its trading floor after closing due to the coronavirus pandemic. The market closed in mid-March, but trading continued online throughout the closure.

The move by Dubai on Tuesday came as the city-state in the United Arab Emirates also began welcoming tourists again.

— Wall Street slipped Tuesday, giving back a slice of the big gains made the past couple weeks.

CLEANING POWER: The Environmental Protection Agency is starting to approve surface disinfectant products tested on the virus. The agency said that it’s approved two products, Lysol Disinfectant Spray and Lysol Disinfectant Max Cover Mist, based on laboratory testing that shows the products are effective against SARS-CoV-2.

The EPA said that it expects to approve such claims for additional products in the coming weeks.

Tue Jul 7 , 2020
The Benzinga Global Fintech Awards — a day of dealmaking, networking and recognition in the financial technology space — takes places Nov. 10.  In recognition of those disruptive innovators creating positive and diverse change within the financial services space, Benzinga is highlighting top San Francisco-based fintechs poised to make some noise at this year’s event. Coinbase […] 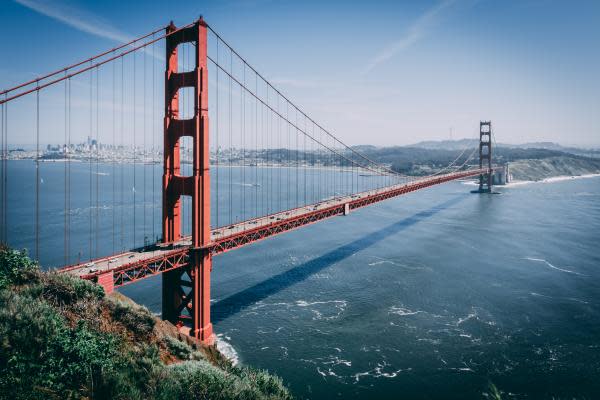