ALBANY — Gov. Cuomo could be keeping an eye on your holiday gathering.

A Buffalo printer with a keen sense of humor is hoping to bring a little levity to the holiday season with a window sticker making it look like the governor is checking in on your festivities.

Dan Bacon, the owner of Custom716, has received hundreds of requests for the tongue-in-cheek product since Cuomo issued a statewide mandate limiting home gatherings to 10 people during the coronavirus pandemic.

Bacon said there was no political motivation behind the design, based on a meme he found online, only a desire to make people laugh.

Orders have been pouring in — from Cuomosexuals and opponents alike.

Dan Bacon, the owner of Custom716, who is selling Cuomo window stickers. (Obtained by Daily New/)

“Whether you love him or you hate him, it works,” Bacon said. “No one has said anything negative about him.”

Cuomo’s 10-person edict has faced pushback from critics and even some law enforcement officials who say the order is unenforceable.

The governor has stood by the decision, predicting a post-Thanksgiving spike in cases if New Yorkers disregard his warning.

“Your safe zone, it’s not a safe zone. Your safe zone is dangerous this year,” Cuomo told reporters during a call Thursday. “This year, if you love someone, it is smarter and better to stay away. “

Bacon said the holidays are going to be hard for a lot of people this year and he thinks most people will be smart about seeing family.

“I get it, you’re trying to protect people, but at the same time I think if you’re getting together with your loved ones if you were feeling sick or felt like you were compromised in any way would you really go and spend time with your family,” he said.

Bacon said he was floored by the initial interest in the sticker, which sells for $10 a piece, given that’s it’s just the top part of the governor’s face peeking out over wherever it’s placed.

The 37-year-old father of three started his printing business in earnest earlier this year. Just before the pandemic set in he was all set to open a storefront in North Tonawanda, between Buffalo and Niagara Falls.

When the physical operation fell through, Bacon kept up with online orders and began printing out of B And R Auto Accessories, a nearby shop that does custom work on cars and trucks.

In recent days, Bacon said it’s obvious when a customer is coming into the store for a sticker.

“Everyone that’s come in has come in laughing,” he said.

Bacon said selling custom prints, including t-shirts, signs and other gear, is a great way to bring joy to people, especially at a time like this.

“I just love making people laugh so this is just like a huge way to making so many more people that I don’t even know, that I would probably never meet, and this is just another way to do that,” he said.

Why sports betting is the next big investment : Augusta Free Press 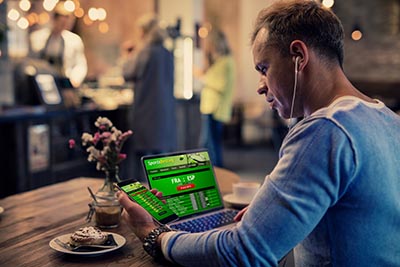