“They wouldn’t answer and it was very frustrating. The DMV is making it impossible to renew a license,” said Steelman, 77. “As of Nov. 23 I will not be able to legally drive . . . despite all my efforts.”

In the Washington region, customers are waiting up to six months to complete routine transactions such as driver’s tests, license renewals and out-of-state transfers. Some services such as driver skills tests are booked through next year.

“It’s a serious problem when you consider that we need cars and without a license, we’re really taking legal risks,” said Steelman, a retired Foreign Service officer. He is planning to take Ubers or taxis to get around in the weeks he will be unlicensed.

The departments of motor vehicles in D.C. and Virginia and the Motor Vehicle Administration in Maryland have revamped their websites, making dozens of transactions available online, including some license renewals and vehicle registrations.

“If you can do your DMV business online, that is the best option,” Virginia DMV spokeswoman Jessica Cowardin said. “Everything is different as a result of the pandemic.”

There are signs that encouragement is working. In Virginia, more than 70 percent of the 7.1 million transactions made since May have been done online, according to state officials.

The shift has helped as local DMV branches continue to operate at reduced levels, handling up to 40 percent fewer customers than before the pandemic.

In-person appointments are reserved for transactions that can’t be done online, including people who are moving from out-of-state, those getting a driver’s license for the first time or applying for a commercial driver’s license, and for residents who need a Real ID credential, officials said.

Hope Cutchins, a graduate student at Georgetown University, said she made an appointment at a District DMV office when she moved to the city from Richmond this summer. The earliest available was three months out.

The wait meant that she wouldn’t be able to meet the city’s 30-day deadline to register her car, or to get her driver’s license before her Virginia license was canceled. She called, emailed and then turned to social media, where she got a response via Facebook. She was able to get her license last month.

“It was not really ideal. Not much of anything is, though,” Cutchins said, referring to life in 2020. “I’m very glad that I don’t have to think about it anymore,” she said.

When all attempts to reach the District DMV for help in getting an earlier appointment failed, Mick Summers, who moved to D.C. from Northern Virginia in July, turned to Twitter.

By then, the Virginia DMV had canceled his license. And the earliest appointment he could get was Dec. 22.

The tweet helped. The DMV responded a few days later, giving Summers the option to visit a service center. He kept the December appointment to go back for his car registration and is keeping his car, with its Virginia tags, garaged.

“Nobody likes the DMV, but I had never been in a situation where I just couldn’t get anything done,” said Summers, 29. “I’m just crossing my fingers and hoping that everything works out on [Dec.] 22nd.”

As coronavirus cases surge again in the region, it remains unclear if the DMVs will maintain driver testing and other services. Customer service centers that are open have taken steps to reduce risks, including installing partitions to separate customers and employees and keeping some windows unstaffed to increase social distancing.

Waiting areas have fewer chairs that are spaced further apart. Customers are asked to stay in their vehicles until their appointment time.

Still, the centers haven’t been immune to virus spread. In Maryland, an employee at an MVA in Prince George’s County died of the coronavirus last month and four other workers in the department’s Largo branch tested positive.

About 135 motor vehicle services employees in D.C., Maryland and Virginia have tested positive for the virus, according to city and state records.

Many DMV employees are working from home and are being deployed to answer customer calls, and in some cases, such as in D.C., to proactively call customers in advance of appointments to walk them through what they need to have when they arrive so they won’t have to make a second trip.

Virginia’s DMV call center, which is equipped to handle up to 5,000 calls daily, logged more than 600,000 customer contact attempts one week in June, Cowardin said. The department has hired contractors to assist with call volumes, she said.

Maryland MVA spokeswoman Whitney Nichels said the agency received an average of 8,300 calls a day in October. The agency has dedicated more workers to the phone lines and increased the number of lines into the call center, she said.

Most area residents who have licenses or IDs that are expiring should not worry about penalties, Nichels said. In the District and Maryland, residents whose driver’s licenses and other documents expire during the pandemic will have a grace period to have them renewed once the health emergency is lifted.

“Customers can rest assured that there is no need to rush into a branch office to address driver’s licenses and registrations that are expiring in the coming days or have recently expired,” Nichels said. “Law enforcement agencies nationwide as well as businesses such as banks and pharmacies, have been made aware of the extension.”

However, Virginia, which also extended licenses at the beginning of the pandemic, is not extending its grace period beyond Nov. 30. The state instead recently launched an online two-year renewal option for driver’s licenses and identification cards that about 150,000 Virginians are eligible for; about 45,000 have taken advantage of the option.

There are 25,000 people age 75 and older who must renew this year and who are required by state law to do so in person.

When asked why a grace period isn’t being extended, Cowardin said most residents who have credentials set to expire are eligible for the online two-year option, which will be offered though the state of emergency.

“Based on the volume of renewals we are conducting each month . . . and the number of renewals due to expire, we have the capacity to handle current renewal demand,” Cowardin said.

Meanwhile, insurance companies, police and even airport security officials, are being more flexible with ID-holders who have not been able to renew their credentials because of the pandemic.

Most insurers aren’t canceling or suspending auto insurance policies of drivers with expired licenses due to the difficulty of renewing during the pandemic, said Kendall Bramble, an insurance agent with AAA Insurance in Washington.

“This has caused a tremendous backlog and alarmed motorists with expiring driver’s license,” Bramble said.

Bramble said those policies generally remain in effect or are renewed once the policyholder provides proof that they have an appointment with the DMV.

Meanwhile, law enforcement agencies in the Washington region say police officers have been directed to refrain from citing drivers with licenses or tags that expired after March 1. They may issue warnings, however, which is what D.C. police are doing, officials said.

Virginia State Police spokeswoman Corinne Geller said the commonwealth’s officers “also recognize the impact” the pandemic has had on the DMV and the backlog. She encouraged residents to use the agency’s online service portal to schedule an appointment for necessary services and keep a copy of the appointment or payment receipt in their vehicle. Then, if stopped by an officer, “the driver can show he or she has taken the necessary steps to address and resolve the situation.”

“However, once the mandated grace period is over, state police will be enforcing the laws regarding licensing and registrations,” Geller said.

Credentials that have expired during the pandemic are being accepted at airport security checkpoints, according to the Transportation Security Administration.

Residents said they understand these are unusual circumstances, and that DMVs are taking protective measures to reduce the spread of the virus.

However: “They have to do a better job,” said Steelman, who like others noted the idea of driving on an expired license adds to an already stressful situation with the pandemic.

“It’s not really anybody’s fault,” Summers, the new D.C. resident, added. “I can see they’re trying to make sure that people don’t get sick and that’s 100 percent the responsible thing to do. But it is super frustrating.”

Sun Nov 15 , 2020
RAPID CITY, S.D. (KEVN) – Crowds gathered at the Rushmore Plaza Civic Center Saturday for the third annual Winter Marketplace pop up. More than 100 local businesses popped their shops up to showcase products so people can get a head start on their holiday shopping. This event started as a […] 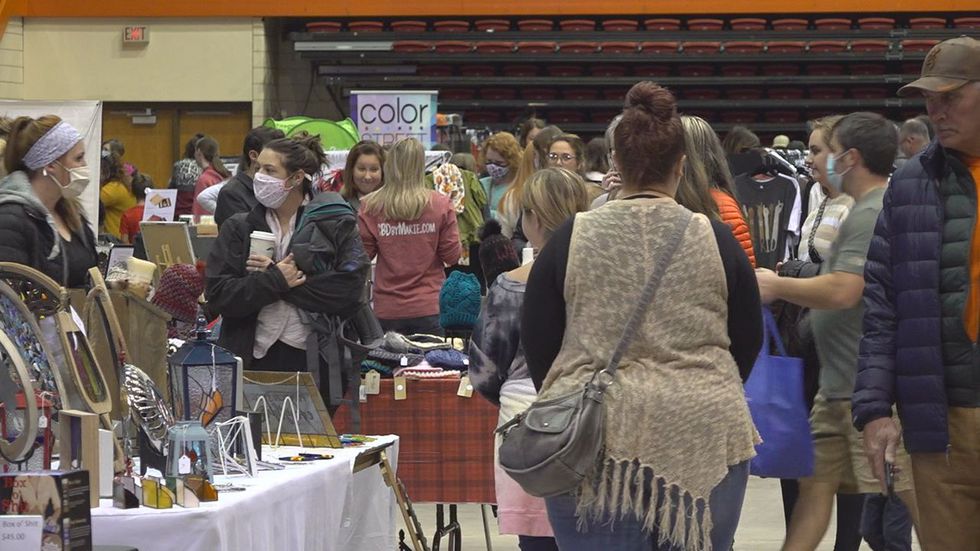