After millions of words, I never expected my life’s work to be reduced to an economic indicator. Yet that’s what it has come to, according to researchers at Australia’s central bank. And you can blame Covid-19 for this, as well.

In their quest to gain better and more timely insights into the economy, economists Kim Nguyen and Gianni La Cava of the Reserve Bank of Australia have constructed a “news sentiment index,” or NSI, from articles about the economy in major papers Down Under, Bloomberg reported this past week. They posit that news accounts not only provide a real-time indicator of the economy, but also have some “causal” role (their word, not mine) in shaping sentiment among businesses and consumers.

Amid the barrage of accusations about fake news and worse, some would say that what we report would qualify as a misleading economic indicator. So it was surprising, but heartening, to learn that the researchers view journalists’ work as important. Their NSI also seems like an example of analysts trying to construct innovative gauges of the economy as it undergoes rapid and unprecedented change that traditional economic indicators can pick up only retrospectively.

Technology has provided a wealth of real-time information that would have been impossible to acquire just a few years ago. Aggregated smartphone data from Apple and Google show where we were going—and weren’t—in the Covid economy, writes Northern Trust Senior Economist Ryan James Boyle in a research note. Platforms such as Homebase track hours worked at small businesses, he adds, while Indeed carries job postings. Open Table shows restaurant reservations, while the Transportation Security Administration tracks airline traffic, and credit cards disclose consumer spending.

And the World Uncertainty Index tracks its namesake factor by keeping count of mentions of the word “uncertainty” and synonyms for it in mainstream news outlets, Boyle adds. Not surprisingly, the count remains elevated, although down from the peak reached earlier this year.

The Australian indicator is constructed by subtracting the number of negative words in articles it scans from the positive words, then dividing the difference by the total of words.

But the Aussie researchers suggest that their NSI news sentiment gauge is a better indicator of current economic conditions than news uncertainty is.

Flattering as it might be to think that these scribblings are influential, experience says that humility is more appropriate. As wizened observers of financial matters say, markets make the news, not the other way around.

For their part, the major stock market indexes ended on Christmas Eve just a fraction of a percent shy of their records, despite the unfortunate news of the uncertainty abruptly wrought in Washington when President Donald Trump suddenly refused to go along with the $900 billion fiscal-relief package hammered out over months by congressional Republicans and Democrats.

The impasse could portend no relief for beleaguered consumers, an end to an eviction moratorium for renters, a lack of funds for vaccine distribution, plus a possible shutdown of the federal government. Yet the markets’ bullish take seems to be that the ultimate outcome will be more generous checks eventually going into most Americans’ pockets.

Perhaps so, but traditional economic indicators show a distinct slowing as the positive impulse of the past stimulus measures peters out. And the front pages of both Thursday’s Wall Street Journal and New York Times chronicled much-weaker-than-expected personal income and spending in November, while new claims for unemployment insurance remained above 800,000 in the latest week.

Consumers’ confidence is waning, which probably reflects the softening job market more than what they’re reading in the news. The Conference Board’s December reading of that factor fell by 4.3 points, to 88.6, the lowest since August and short of the consensus forecast of 97, with weakness in two-thirds of geographical regions and three-quarters of income groups, notes David Rosenberg, founder of Rosenberg Research. Respondents describing jobs as “hard to get” rose to a four-month high of 22% from 19.4%, while those viewing jobs as “plentiful” fell to 21.8% from 26.3%, which is consistent with continued high jobless claims.

And consumers aren’t taking news reports of official low inflation readings to heart, Rosenberg writes. Their one-year expectations for inflation rose to 5.9% in December from 5.7% in November, no doubt reflecting the jacked-up prices they see when shopping. The bond market also sees higher inflation in “break-evens” (the difference in the yield on 10-year Treasury notes and similar-maturity Treasury inflation-protected securities), or TIPS, which hit 1.97%, a tick above the April 2019 high.

Read more Up and Down Wall Street: China’s Currency Is Getting Stronger. What That Means for the U.S.

The Conference Board nonetheless found increased bullishness on stocks, with a three-month-high 38.5% of respondents expecting the market to rise, up from 34.4% in November. “Go figure,” Rosenberg writes. “I suppose they are taking their cue from the promoter du jour, Jerome Powell,” the Federal Reserve’s chief.

The central bank expects to keep interest rates near zero and continue to pump $120 billion a month into the financial system until the economy is near what it considers full employment. That’s apparently all the news that investors need to know.

Program helps inmates own their job upon release

Fri Dec 25 , 2020
PHOTO | BRIAN HAMILTON FOUNDATION Starter U founder Brian Hamilton (in the black sweater) meets with incarcerated residents of the Mecklenburg County Detention Center during a February meeting. Starter U is a free online entrepreneur course that’s part of the Inmates to Entrepreneurs program. Starting a new […] 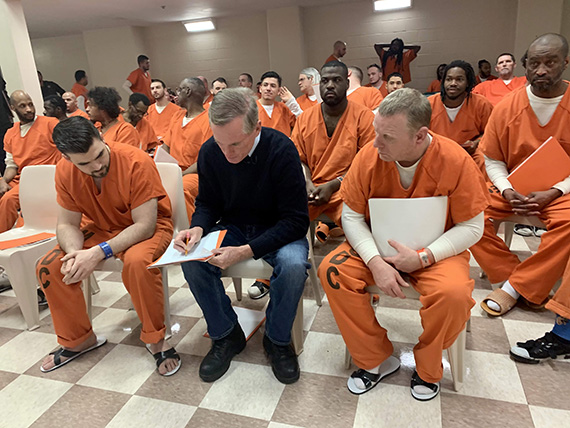