Liz Mejia, temporarily laid off from her job as a restaurant server at Los Angeles International Airport in March, knew her family had to cut costs. So she and her husband added vegetables and fruit to their garden in South L.A., and they bought a cow, had it butchered, and shared the meat with relatives to bring down grocery costs.

Elvia Martinez, who lives in a garage with her two children and her mother, was laid off for two month from her airport restaurant job. She’s back at work now but worries about getting the coronavirus from customers and taking the infection home to her family.

Socorro Ponce, a 67-year-old housekeeper at the W. Hotel in Hollywood, takes a deep breath when she has to clean a suite where there’s just been a party. She opens the small window in the room and props the door open with her service cart, hoping the draft will blow out any bad air and keep her free of the coronavirus.

On and on and on it drags, six months and counting, and the working people of Los Angeles — the backbone of the local economy — continue to cope with reduced hours, lost jobs and fears of getting sick and infecting their relatives. Those who apply for unemployment insurance often wait weeks while claims are processed and bills mount.

“They are caught in a Catch-22 — do I stay home and try to stay safe but risk not being able to pay the rent, or do I go to work and risk being exposed to the pandemic?” said Kurt Petersen, co-president of Unite Here Local 11, which represents 30,000 hospitality industry employees in Southern California and Arizona.

“We find that most hotels put profits over safety and don’t want to do enough to keep things safe for employees and guests,” Petersen said. “That’s a problem. And the mantra in hotel management is that the guest is always right. Well, that’s a big problem these days, because guests aren’t wearing masks all the time, they don’t social distance, and there are parties in the pools.”

On Wednesday, Petersen and members of Local 11 rallied outside JW Marriott Santa Monica Le Merigot, demanding that a housekeeper who was fired after getting COVID-19 be given her job back.

“The company claimed I was fired because I worked and failed to notify management of potential symptoms I experienced days before,” 63-year-old Margarita Santos said when she stepped to the lectern on Ocean Avenue to plead her case. “But I believe my firing was unfair.”

Santos told me she informed a manager one day last month that she had a headache. She says the manger told her to take some painkillers, and Santos continued working. Except for problems with asthma, she said she felt fine a few days later when she went to work, but took ill again and was sent home. She went for a COVID-19 test, and when it came back positive, Santos said, she called to inform her manager.

A few days later, she got a termination notice claiming she knew she was sick and had gone to work anyway because she needed the hours to pay her bills. Santos disputes this, as does the union, but the termination letter from Le Merigot General Manager Damien Hirsch left no room for discussion.

“You knowingly put our guests and your coworkers at considerable risk of being infected with COVID-19,” he wrote. “Your egregious behavior and conscious disregard for the health and safety of others is completely unacceptable. For these reasons, we are terminating your employment…effective July 31.”

Hirsch told me he had nothing to add to what was in his letter, but one has to wonder if there might have been a better way to address a dispute involving someone who’d worked for the hotel for more than a decade other than kicking her to the curb when she was sick. In the letter, Hirsch did not inquire how she was feeling, and Santos believes she was targeted because she had been a union organizer.

Santos, who’s feeling better now, lives in a Porter Ranch house with her brother and sister. The three are caretakers of the property, so she doesn’t have to worry about rent for now. But losing her paycheck and her healthcare hurt, she said, and she’d like to have her job back.

We’ve given a lot of consideration in recent months to first responders and healthcare workers, and rightly so. But we’ve sometimes taken other essential employees, including supermarket employees, for granted. As Laura Nelson reported, a Metro bus driver just died of COVID-19, the second death at Metro, which has had 341 cases of positive COVID-19 tests.

Mejia, the LAX restaurant employee, told me she and her husband Arturo, a jet mechanic whose hours have been reduced, fear losing the house they bought five years ago if the pandemic goes on much longer.

The house is not in the best or safest neighborhood of South-Central L.A. A homeless encampment is two doors away and traffic rumbles by on the I-110 Harbor Freeway, but the young couple’s pride in what they’ve built was on full display as they showed me their home.

The garden is thriving, and their two grade-school daughters have an inflatable pool in the backyard under a lovely redwood terrace Arturo built. Strawberries and squash are ripening on the vine, along with peaches and citrus fruit, and the young chickens will provide a regular supply of eggs when they’re older.

The Mejias have eliminated all nonessential expenses and, before they bought the cow, they had their pet goat slaughtered to feed themselves and relatives who are struggling more than they are.

“Our whole thing is, ‘We have to hold onto the house,’” said Liz. They had thought about buying in the Inland Empire and getting more house for their money before settling in South-Central L.A., “but we both work at LAX,” Liz said, and they didn’t want to lose time with their kids because they were making long commutes.

Martinez, the airport food server who lives in a garage, said she delayed paying rent to her sister, who owns and lives in the main house. Martinez is glad to be back at work now at a fast-food restaurant in the international terminal, but she worries about not having her phone with her. She leaves it at home because her daughter needs it to get online with her tablet for virtual classes in L.A. Unified.

And she fears getting sick at work.

“It’s scary,” she said. “You don’t know if the person you’re close to has been exposed, and some people don’t want to wear masks. I tell them they have to, and they look at me like, ‘Why are you telling me this?’”

Ponce, who lives near downtown L.A., removes her uniform after getting off work at her Hollywood hotel and showers immediately when she gets home. She said she’s assigned to suites at the hotel, and tips have been rare. She holds her breath when she walks into rooms that can take up to 90 minutes to clean, and she’s disgusted at times by what guests have left behind.

“I remember walking into a room with needles in the trash bin, discarded masks and a mountain of condoms,” Ponce said.

At the Le Merigot rally Wednesday morning, Kristin McCowan of the Santa Monica City Council spoke up in defense of Santos. She later told me she believes Santos was unfairly dismissed.

“I feel for workers who are in a position where they can’t even afford to get sick,” McCowan said, and she doesn’t think hotels are doing enough to protect their employees. “They’re put in harm’s way every day. That’s what they have to do to make a living.”

At the rally, Rabbi Neil Comess-Daniels of Beth Shir Shalom stood before Santos and led a blessing for her. Santos and others held hands aloft in prayer as the rabbi asked that she find strength in dark times.

In the last words of her speech, Santos said of her employers:

“At a time when I needed them to help me, they let me down.”

We hadn't met before stay-at-home. How would we hold on? 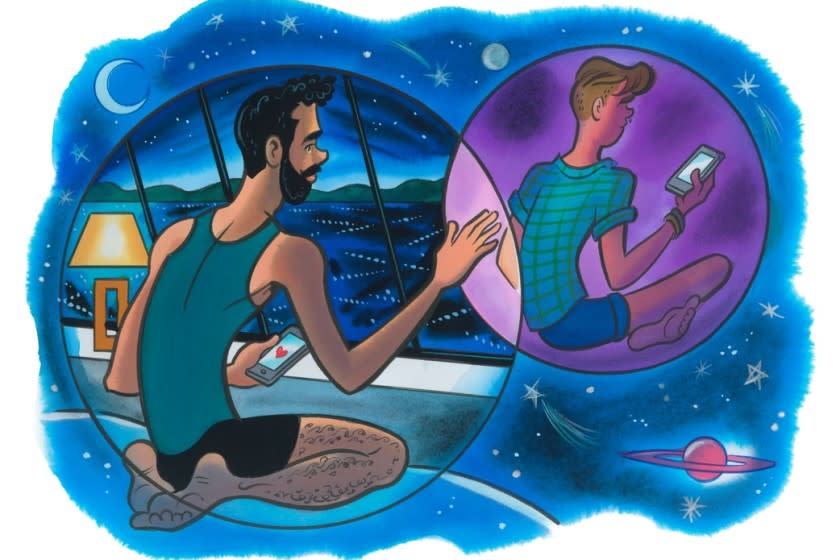