Sam Lyon pushed the earning potential of the gig economy to its limits.

The 26-year-old from Salem, Oregon, made thousands of dollars in one month delivering food for Uber Eats, an app for gig work that’s proven especially popular during the pandemic. He challenged himself to make as much money as possible in June. To do that, he drove 12 hours a day for 30 days straight.

By the end, Lyon made $8,357 and documented his journey on the video-sharing site TikTok, where he goes by the moniker SabbiLyon. Each day, he recorded a short video to log his progress — amassing more than 200,000 followers and millions of views along the way.

In an interview with The Penny Hoarder, Lyon broke down his earnings, what he learned and what other delivery gig workers can take from his 30-day challenge.

Before we get started, let’s be clear: What Lyon earned is not typical. Far from it. Many factors went into his paycheck but none more than his sheer determination. He drove 12 hours, the maximum Uber Eats allows, for 30 days without a single day off.

His specific challenge may not be replicable (or even advisable) in every circumstance. But if you’re a current or aspiring delivery-app driver, you can apply Lyon’s advice to maximize your earnings.

1. Set Goals. Even Tiny Ones Help

The very premise of Lyon’s challenge is a goal. It gave him something to focus on and the motivation he needed to make it through grueling 12-hour days.

“I think goal setting was huge for my success,” Lyon said. “Setting markers in what you want to achieve are extremely important.”

After a week or so of driving, he was able to see how much money was possible to make given his parameters. So he aimed for a specific target: $8,000 by the end of June.To reach that, he would try to make at least 20 deliveries a day. He didn’t worry much about the pay of each delivery because they ended up averaging about $10 an order.

“I knew I needed to do at least 20 trips to get around that $200-a-day mark,” he said. “So that was always my goal. Anything after that was icing on the cake.”

Before you start your gig, have a professional or financial goal in mind. That can keep you on track — and keep you from burning out.

Keep your side hustle in check. Here’s how to create an exit plan so that you can enter the gig economy, meet your goals and get out.

When you’re making your Uber Eats driver profile, don’t blast through it thinking you can go back and change it later — especially the photo step.

Your customers don’t have much information about you as a driver. They get a first name, maybe a last initial, the make and model of your car and a tiny, circular picture of your (hopefully) smiling face.

“Whether we like it or not, people dictate how much they tip and how they treat other people by how presentable they look,” Lyon said. “Have a good, high-quality profile picture.”

The first picture you choose is the one you’re stuck with. Uber policy allows drivers to change their picture only if something happens that alters their appearance since the original photo. In that situation, you’d have to contact customer support.

3. Manage Expectations Based on Your Market

What you earn from Uber Eats is heavily determined by your market — the city or metropolitan area you deliver in.

Lyon drove primarily in Salem, Oregon. If you were to do the same challenge in a different city, you may make more or less than he did. A perfect example of this played out over TikTok. About halfway through June, another Uber Eats driver posed a challenge to Lyon: Who could make more money in a day?

“It started off as a beautiful day. The birds were chirping. The sun was shining,” Lyon said in a video. “The perfect day for two gladiators to enter the arena.”

They both delivered food for 12 straight hours. The difference was that the other driver lived 45 miles north in Portland, Oregon. That turned out to be a crucial factor— the challenger made $323 to Lyon’s $268.

A bigger city doesn’t always equate to better profits though, Lyon noted. Heavy traffic is likelier and could slow you down. You may have to pay to park to make the delivery.

“Suburbs are just front porch and then you’re gone.”

4. Learn From the Trends in Your Area

Lyon is a big proponent of the quantity-over-quality approach to accepting orders.

“When you’re starting, accept every single order and then find your own trends in your own area,” he said.

Once you get a sense of those trends, you can then experiment to try to maximize your pay.

“See what kind of restaurants you like and which ones you want to avoid, he said”

FROM THE MAKE MONEY FORUM

See more in Make Money or ask a money question

Some Uber Eats drivers pass on smaller orders in hopes to land larger ones. But that can backfire for inexperienced drivers. Lyon said he put that strategy to the test and found, on average, he was making $10 an order no matter how selective he was being.

In the time it would take him to land a big order, he says he could have been delivering three smaller orders.

“Not only that — that’s three orders. That’s three different tips, too,” he said.

Results may vary in your market. The key is to adapt to your locale.

Downtime between orders trips up many new delivery drivers. You’re delivering food all day, after all. You might be tempted to go through the drive-thru for yourself. But idle spending can eat into your earnings.

Lyon vowed not to fall into that temptation. He carried only $20 in cash, and that was strictly for gas. If he had downtime, he’d listen to podcasts or practice Spanish — while positioning himself for his next order.

“If I was delivering to a suburb, my downtime would be spent driving the extra mile or two to be parked next to a McDonalds, an Applebees, a Red Robin.”

And to cut down on costs, his own food was homemade.

“I would go home and spend 30 minutes to an hour preparing food and eating before going back on the road,” he said. “I did not have any fast food during that 30 days.”

Referral bonuses are “definitely not worth the time,” according to Lyon.

Uber Eats gives drivers a referral code that they can share with other people to get them to start delivering, too. Once the new driver completes a certain amount of deliveries, the recruiter earns money. But the amount fluctuates depending on the market. Sometimes it’s $200 per 50 trips. Other times, it’s $10 per 50 trips.

The app shows you potential earnings based on the amount you would have earned if all the people you invited completed their first 50 trips.

And that’s coming from someone who had hundreds of thousands of followers on TikTok.

7. Indulge Odd Requests. They Could Lead to Big Tips

Of the hundreds of orders Lyon completed in June, he got some pretty weird requests from customers. One person asked if he could deliver a pack of cigarettes along with the food order. Lyon told the guy that he didn’t have the money on him to buy the cigarettes on his own, thinking it would end there.

“You can stop by here. I’ll put the money downstairs and you can come grab it,” the customer responded.

Lyon went for it.

Lyon entertained just about every odd request he got. They usually led to big tips.

“My days were long,” he said. “I would do all that stuff to kind of break it up and have fun.”

When the paychecks from your side gig start rolling in, it’s easy to think all that money is profit. However, quite a bit of it actually goes toward expenses and taxes. It’s one of the biggest pains of being a 1099 worker.

“I would definitely keep in mind you will have to pay those taxes later. It’s not automatically coming out of what you earned,” Lyon said. “Personally, I set aside 30% of what I make. That way, I have a little bit of wiggle room.”

Lyon’s got the right idea. Freelancers, independent contractors and gig workers should set aside about 30% of their paycheck for 1099 taxes.

And if you’re keeping track of expenses like gas and car depreciation, you can factor that into the amount you’re withholding for Uncle Sam. Lyon’s system was pretty simple. He had a fixed amount for gas, $20 a day. That totalled $599. He had one oil change ($49), and also factored in his car’s depreciation ($500) based on the miles he drove.

Setting aside 30% might seem steep, but it’s usually an overestimate. Lyon, like most taxpayers, would rather have a refund come tax time than a hefty tax bill.

Adam Hardy is a staff writer at The Penny Hoarder. He covers the gig economy, entrepreneurship and unique ways to make money. Read his ​latest articles here, or say hi on Twitter @hardyjournalism.

This was originally published on The Penny Hoarder, which helps millions of readers worldwide earn and save money by sharing unique job opportunities, personal stories, freebies and more. The Inc. 5000 ranked The Penny Hoarder as the fastest-growing private media company in the U.S. in 2017.

Mon Aug 10 , 2020
Day three of the Locarno Film Festival StepIn 2020, moderated by Variety‘s Leo Barraclough and hosted by the Variety Streaming Room platform, brought professionals from various parts of the film festival and market sectors together for a panel on the Future of Film Festivals and Film Markets. Jérôme Paillard, executive […] 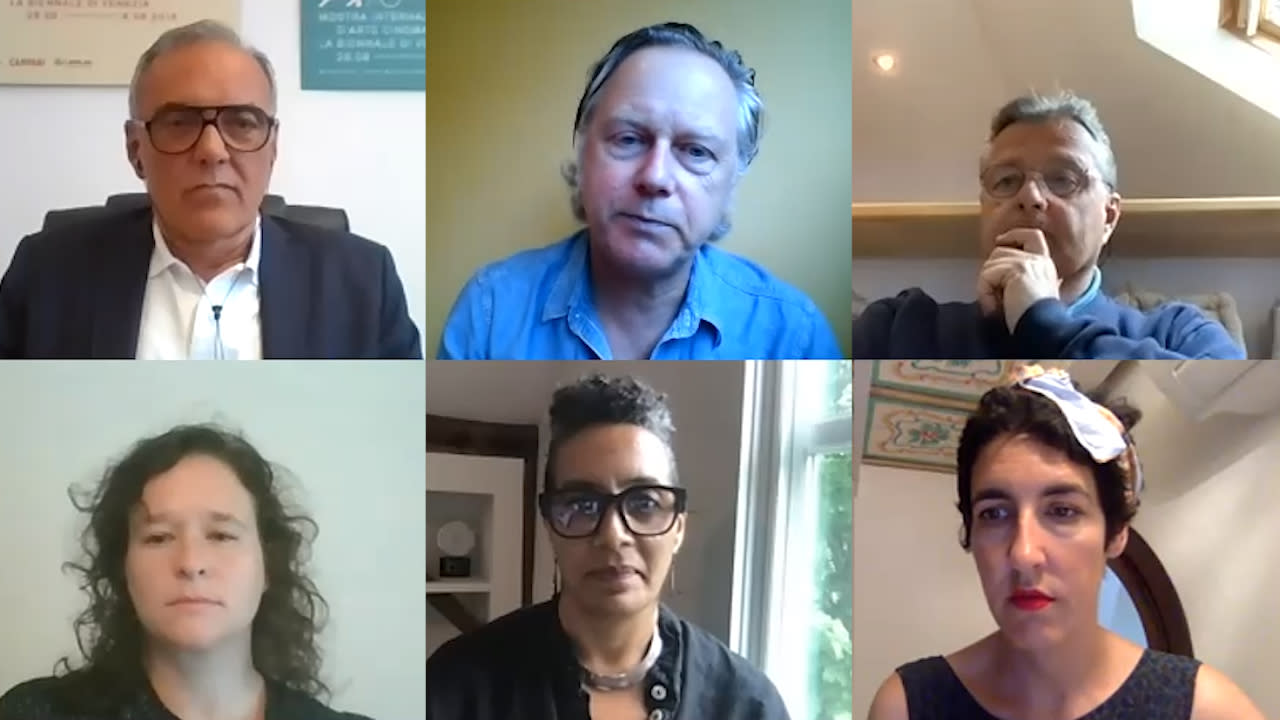