Shares of United Parcel Service (NYSE:UPS) are crushing the market this year as more and more consumers are choosing to shop online. Despite losses from its business-to-business (B2B) segment, UPS has maintained strong profit margins, resulting in record revenue and net income.

Close to an all-time high, UPS stock still looks to be a great value. Black Friday and Cyber Monday have been absolute blowouts, and UPS could be a big winner. Here are the details. 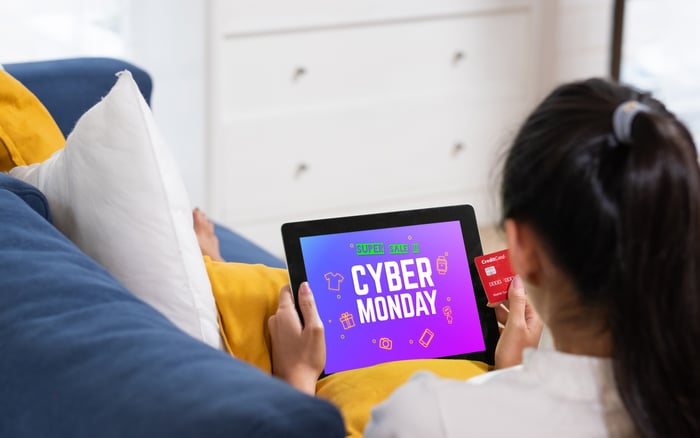 Early Cyber Monday data suggests this year was a record. Adobe Analytics estimates $10.8 billion in sales, up 15% from 2019 (which was also a record). However, it’s worth mentioning that Adobe Analytics’ original report forecasted $12.7 billion in Cyber Monday sales, which would have been a 35% increase over 2019.

2020 has been a year of higher consumer spending despite higher unemployment and lower nationwide income. Consumer spending has increased every month since June, which is encouraging for retailers and transportation companies alike. UPS should benefit from e-commerce activity through companies like Shopify, online retail sales from omnichannel companies like Target and Walmart, and of course, from pure-play internet retailers like Etsy.

Ahead of the curve

Online shopping and e-commerce have been steadily growing. But the trend accelerated this year. To UPS’ credit, the company had the foresight to invest in the trend. In 2019, the company published a whitepaper called “The New Ecommerce Ecosphere” in which it highlighted what it considers to be the future of retail. Greater consumer expectations, the rise of what UPS calls “frictionless commerce,” globalization, and on-demand delivery all contributed to UPS’ development of its Digital Access Program (DAP).

The DAP is basically UPS’ way of collaborating with online vendors, merchants, and payment providers to offer attractive rates and easier ways to manage shipping. To put it simply, think of all the small to medium-sized businesses (SMB) out there that are relying more and more on online sales. They could use Shopify for their storefront, Square or PayPal for payment services, and UPS for shipping services. UPS is tapping into a relatively new market by targeting SMBs directly and giving them the same advantages as larger companies. 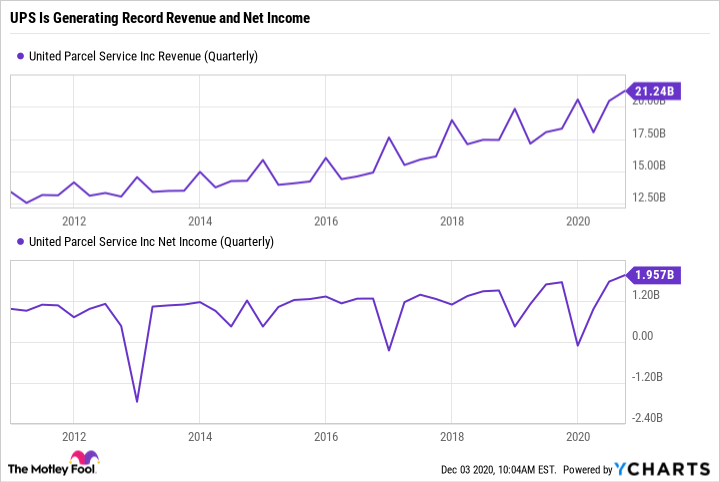 UPS’ CEO, Carol Tome, announced that the third quarter generated 18.7% SMB growth, the highest in 16 years. SMB sales now make up 24% of the company’s total U.S. revenue. UPS noted that although the commercial side of SMB sales fell 7%, the residential side increased by 62%.

When you think about our SMB customers, think of them as medium, small, micro, and platform. When we looked at the performance of our SMBs across all four of those segments, we saw each of them grow. And the growth came from our medium-sized businesses as well as our platform businesses.

Even with these headwinds, UPS is expected to finish strongly for the year. Low expectations should be priced in, meaning that a better-than-expected holiday season could provide positive news in the short term.

Looking ahead toward 2021 and beyond

The company has a lot going for it over the long term as well. Its business to consumer (B2C) segment is thriving, some of which could tail off in 2021 if the economy returns somewhat to normal. Still, many consumers might make a permanent shift to online markets. Simply put, there’s plenty of room for growth in B2C e-commerce.

Keep in mind that UPS is posting record results despite lower B2B sales. B2B sales tend to be higher-profit, lower-volume sales, which are great for the company’s bottom line. If that business comes back as expected and B2C stays strong, UPS could have another record year in 2021.

Aside from the company’s U.S. sales, its international business continues to thrive. International has been one of the company’s most profitable segments. And after declining in the second quarter, its supply chain and freight business is showing improvements as well.

As for the reliability of its dividend, UPS earned adjusted free cash flow (FCF) of $5.95 billion in the first nine months of 2020 — more than double the $2.52 billion or so in dividends it paid during that time frame. UPS can use this extra FCF to pay down debt, buy back shares, or retain it for future investments. UPS’ healthy FCF generation is a sign the company’s business is profitable and well-structured to cover financial obligations like dividends.

A little bit of everything

UPS has a bit of everything. It has growth prospects. Its earnings are at record highs. It has an impressive dividend that should continue to increase. And it leads its industry. Picking up a few shares of UPS could be a good option for retirees or anyone looking to add a premium dividend stock to their portfolio. Pessimistic fourth-quarter guidance and a strong holiday season offer plenty of short-term upside, but long term investors will be even more interested in the company’s e-commerce investments, international strength, and ability to generate tons of cash.

Fri Dec 4 , 2020
© Provided by Slickdeals Everyone wants to live a comfortable financial life. And while earning a decent income can certainly reduce your stress, smart money management habits can have an equally important influence over your financial health. If you’re looking for ways to improve your budget, you can start by […]