If you’re looking to make the most of your investment dollars, growth stocks are what you’ll want to buy. Investors just don’t get as excited about dividend stocks as they do about hot growth companies, and if you can find a company that continually grows its sales at 20% or better, it could be your path to some terrific returns.

Two stocks that could fall into that category today are Trulieve Cannabis (OTC:TCNNF) and PayPal Holdings (NASDAQ:PYPL). There’s a lot to like about where these two companies are heading, and if you’ve got $5,000 to invest today, here’s why you should consider buying one or both of these stocks right now.

Cannabis producer Trulieve is an enticing growth stock because it’s generating some great sales numbers, and it’s still only scratching the surface of what’s possible. Today, 65 of its 67 dispensaries are located in its home state of Florida. The company’s focus on its home market has allowed Trulieve to keep its costs down and generate profits along the way.

Through the first six months of 2020, Trulieve reported net sales of $216.8 million, more than double the $102.4 million it recorded during the same period last year. It’s achieved that growth while posting a profit of $20.6 million during the first two quarters. That’s technically down from a year ago, when Trulieve reported $72.2 million in earnings — but that’s a bit misleading, as the company also benefited from fair-value adjustments of $76.5 million (this year, fair-value adjustments went the other way and dragged Trulieve’s profit down by $21.2 million). 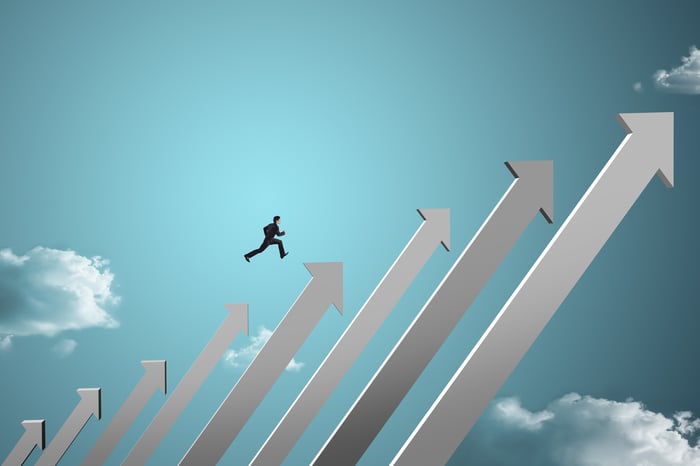 But as well as the company has done, it can do even better in the years to come. In the Florida market, the company only began selling edibles this year. And in September, it announced that it would be expanding into a fifth state: Pennsylvania. Trulieve already has a footprint in Connecticut, Florida, and Massachusetts, where it’s planning to launch operations next year.

The company’s focus in expansion is on the Northeast right now, and with New Jersey voters having just chosen to legalize recreational marijuana, Trulieve will soon have even more potential growth opportunities it can target. In addition to the Garden State, Arizona, Montana, and South Dakota voters also voted in favor of permitting adult-use marijuana in their respective states. Mississippi, meanwhile, will move ahead with a medical marijuana program, as that initiative also passed.

Trulieve is in a great position to benefit from marijuana reform. The company’s sales, and its stock price, will likely be a lot higher in the years ahead.

Another great potential place to put $5,000 is PayPal. The digital payments industry is much further ahead than cannabis is, and while PayPal isn’t doubling its revenue, it’s still producing some impressive numbers. The company’s business is diverse, allowing people to send money to friends and family via Venmo as well as invoicing clients and sending money to anyone (its core business). Its $4 billion acquisition of Honey, completed earlier this year, also gives online shoppers a way to save money using a simple browser extension.

One societal change that may be accelerated by the coronavirus pandemic is the move toward cashless transactions. The company is already seeing some evidence of this in 2020; in third-quarter results released Nov. 2 (covering the period ending Sept. 30), the California-based business reported total payment volume of $247 billion, up 38% from the prior-year period. Net revenue of $5.5 billion rose by 25%. The company said that during the period, it achieved the “strongest growth in total payment volume and revenue in PayPal’s history.” Its profit of just over $1 billion was also up 121% year over year.

If these trends continue, PayPal’s numbers will continue rising in value, making it an attractive buy for the long term.

Which growth stock is the best buy for you?

PayPal and Trulieve are in two vastly different industries, and which stock is ideal for your portfolio will likely come down to your investing style. Year to date, both stocks are significantly outperforming the S&P 500: 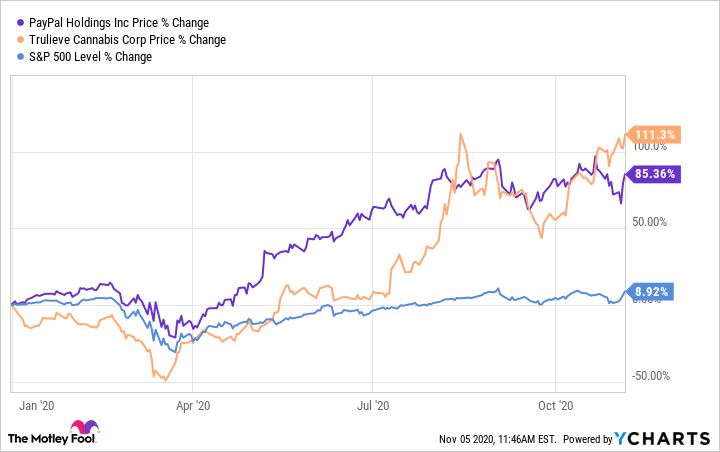 Trulieve has been the better-performing stock, and I wouldn’t be surprised if that trend were to continue. The cannabis industry gets bigger every time a state moves to legalize marijuana. And New York could be the next state to do so.

However, cannabis remains illegal at the federal level, and that’s why there’s a bit more risk involved when buying pot stocks. While Trulieve may be able to expand into more states due to legalization, it will also be a costly process because marijuana can’t cross state lines. To expand into another state, a company would need to acquire another business or set up its own separate operations. That’s a risk for Trulieve, which could end up burning through cash or needing to issue more shares to fund its growth (diluting existing shareholders in the process). There will definitely be a lot more potential for Trulieve’s stock to rise in value over the years given that the industry is still in its early growth stages, but it won’t be a risk-free investment by any means.

If you’re OK with taking on a moderate level of risk on a $5,000 investment, Trulieve will be your best option. But if you want to minimize your risk, then going with PayPal and investing in a more stable and predictable industry will be the better option for your portfolio.

What It Takes to Earn 2021's Maximum FRA Social Security Benefit of $3,148 Monthly

Sat Nov 7 , 2020
In 2021, the maximum Social Security benefit for those retiring at full retirement age will be $3,148 monthly. That adds up to $37,776 annually — not enough for world travel, but still a healthy supplement to the distributions you’ll take from your retirement account. Here’s a look at how to […] 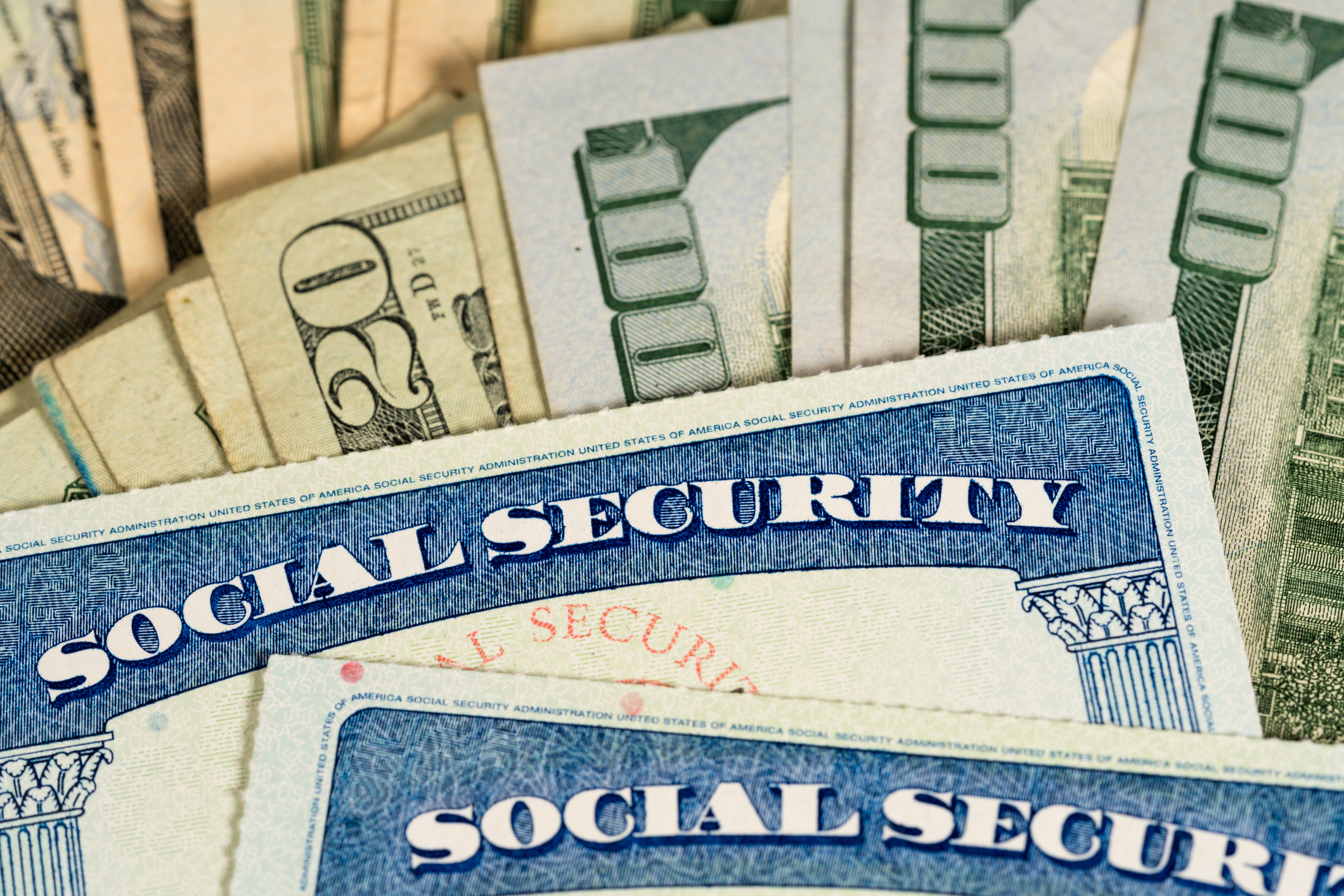