For the last five months, Film Comment — the house organ of Film at Lincoln Center, a repository for erudite film coverage, and a thought leader in specialty film — has existed in limbo. It’s not dead; while the staff was put on hiatus in March, publisher Eugene Hernandez is working to determine next steps. It’s not in print; its last physical edition was March/April. It’s not quite digital: Content for the May/June issue is available at the Film Comment site and at Zinio, but any internet consumer knows that online publications can’t survive on bimonthly updates.

From the critical brickbats of Pauline Kael vs. Andrew Sarris to defining identities for seminal filmmakers like Max Ophüls, John Huston, and Martin Scorsese, Film Comment has been at the center of a vital global film conversation for 58 years. Embraced by cinephiles and academics, it also saw the art in a 1975 Bugs Bunny cover drawn by Looney Toons animator Chuck Jones. If Hernandez has his way, that discourse will continue with renewed vigor.

“We believe in Film Comment, its past and its future,” wrote Hernandez in an email. “We are not dead so please don’t make this an obituary!” Later, he added: “With theaters closed, FLC continues to navigate a challenging time. We remain committed to Film Comment as a vital part of our mission, and while it remains on hiatus, we look forward to restoring our programs when possible.”

The venerable publication is in an awkward position, but it’s not alone. It reflects the strained and changing world of movies, and the market pressures on analog publishing and theatrical releasing alike.

Two decades into the 21st century, circulation and subscriptions are in steep decline, and movie stars no longer guarantee sales. Over the years, we’ve lost print movie magazines American Film (1992), Film Culture (1996), Premiere (2007), and Movieline (2009). Entertainment Weekly survives as a much slimmer version of its former self, and one that leans heavily on television. The Hollywood Reporter and Variety still have glossy weekly print editions with significant cover allure, but both trades embraced digital long ago. That future could beckon for Film Comment, but it would be a tricky transition.

When IndieWire cofounder Hernandez went to Film at Lincoln Center a decade ago, he had the mandate to push the hidebound magazine into the digital age. As publisher, he’s consistently advocated to place more of the magazine’s treasure trove of back issues online. He met initial resistance to change from then-editor Gavin Smith — the board of directors almost shuttered the magazine during his tenure — but when Nicolas Rapold became editor in chief in 2016, he started working to embrace an online readership.

Film Comment has never been profitable, nor was it ever expected to be. Currently, it generates a deficit of about $200,000 per year. The print edition was distributed free to Film at Lincoln Center to members at all levels (current annual memberships range from $25 to $500) and was also available by subscription. Circulation hovered around 20,000, which includes a smattering of newsstand sales. Among its handful of advertisers were HBO, the Warner Archive, and the Criterion Collection.

Financial concerns dogged Film Comment from the start. Inspired by publications like France’s Cahiers du Cinema, it launched in 1962 as a 36-page zine called Vision: A Journal of Film Comment. (Two issues in, it shortened the name.) Interviewed by Film Comment’s Cliff Froehlich for the magazine’s 100th issue, founding editor Gordon Hitchens said that for years no one was paid.

Founding publisher Joseph Blanco quickly dropped out, and a wealthy aspiring actress, Clara Hoover, stepped in. Three years later she set up a nonprofit entity, the Film Comment Foundation, and sold the rights to Hitchens for $1. From there it was grants, handouts, and irregular publication schedules. That led to the creation of the Film Comment Publishing Corp. (largely financed by a new publisher, filmmaker Austin Lamont) in 1968; by 1973, the magazine was still losing money but attracted the attention of the Film Society of Lincoln Center. It took over all rights and assets; Lamont also paid FSLC $60,000 a year for three years, to cover the magazine’s deficit. (He also got a seat on the FSLC board.)

If numbers weren’t Film Comment’s strong suit, capturing the zeitgeist of film culture was. “Film Comment was the embodiment of a sensibility I eagerly and lovingly acquitted in my twenties, of which the capital was the west side of Manhattan, and whose shrines were the Thalia, the New Yorker, the Bleecker Street, and of course Alice Tully Hall,” USC screenwriting professor Howard Rodman wrote in an email. “Here was the Nouvelle Vague, and the German new wave, Lang and Dreyer and Keaton too, and Fuller and Ray, and Kiarostami, and Valie Export and Chantal Akerman and Kidlat Tahimik. The debates went to the heart of things; the discoveries were as revelations. It limned a library that was the world, and one I lived in for the longest time. And if truth be told: continue to.”

Full disclosure: In 1980, longtime Film Comment editor Richard Corliss hired me as the magazine’s associate editor. Corliss was starting a full-time job as film critic at Time Magazine, and needed help producing the magazine while he toiled in the Time/Life building.

At Film Comment, I launched my career and chased after Guilty Pleasures (the column in which cinephiles confess films they shouldn’t admire, but do) from the likes of John Waters, Matt Groening, Michael Powell, and Stephen King. I worked with writers like Harlan Jacobson and Richard T. Jameson (both went on to edit the magazine), David Thomson, Joseph McBride, Todd McCarthy, Stephen Harvey, Carrie Rickey, Jonathan Rosenbaum, J. Hoberman, Molly Haskell, Andrew Sarris, and Boston critic David Chute (whom I followed to Los Angeles, and married).

It had one of the first interviews with Richard Linklater, before he sold “Slacker;” Marcia Pally’s interrogation of Brian De Palma on his representation of women in his films; and Jacobson’s hand-to-hand combat with Michael Moore over factual inaccuracies in “Roger and Me.” “Neither one is a reliable reporter,” wrote John Pierson, who sold the documentary to Warner Bros. “And I still don’t know who or what I believe 31 years later! But damn, that was a big deal.”

The ’70s and ’80s were the magazine’s heyday, when it hosted a wide range of contributors to write about movies and film culture, including studio pictures, indies, foreign-language films, and documentaries. The magazine widened its scope to cover more classic Hollywood, maintained an ongoing debate about the state of film criticism, and took deep dives into international cinema. It also put movie stars on the cover — not just French arthouse belle Isabelle Huppert, but Robert De Niro, Jane Fonda, Meryl Streep, Richard Gere, Goldie Hawn, and Clint Eastwood, not to mention George Miller’s “The Road Warrior,” George Lucas’ “Star Wars,” and Steven Spielberg’s “Raiders of the Lost Ark” and “E.T.”

Over the years the coterie of critics narrowed; so did the focus, preferring coverage of the global arthouse niche. Under Rapold, the publication moved into online events and launched podcasts. He brought in fresh blood like film writer and historian Farran Nehme and assistant editor Devika Girish, executed a redesign, and embraced stories about the art and craft of film. His cover stories reflect eclectic tastes: “First Cow,” “Once Upon a Time in Hollywood,” Robert Pattinson (for Claire Denis’ “High Life”), Kristen Stewart (for Olivier Assayas’ “Personal Shopper”), Ryan Coogler, Agnes Varda, “Parasite,” Apichatpong Weerasethakul, and Vitalina Varela, the eponymous star and co-writer of Pedro Costas’ internationally award-winning drama.

It’s a dizzying display of the breadth and depth that auteur cinema represents today, but regular contributor Paul Schrader said the publication has become “a bit exhausting” as a result. (He also provoked readers in 2006 with his “Canon Fodder,” which argued for the need for a film canon to process “too many movies.”)

“That’s the current critical dilemma,” he wrote over email. “Do you make hard choices, or be an omnibus? I hope Film Comment is making a tactical retreat, just as so many other cultural enterprises are. It deserves to be resurrected, both online and in print. The nice thing about the print edition is that you can place it on your coffee table where it will just sit, giving you the eye, nagging, until you pick it up and randomly read something you wouldn’t have read otherwise.”

It also meant some longtime writers ended their association with the magazine. Award-winning essayist and Columbia University professor Phillip Lopate wrote for Film Comment for 30 years. “I often felt that my pieces were somewhat tonally at odds with the standard Film Comment piece, which struck me as written in brash, hip journalese — a sort of shorthand that signaled those in the know,” he wrote. “Was this simply a matter of getting rid of the older writers, who were presumed to be too square, too out of date? It’s true that my aesthetic was often at odds with the pictures that were being touted as Flavor of the Month, that generally had a youth-flattering buzz but that often struck me as emotionally immature or callowly sensationalist.”

But what can that be? The online universe leans into fast-moving clickbait, which could make a digital Film Comment stand out as an opportunity to read about film in depth. Online-only might reach more cinephiles, but how could it retain its status as a benefit of Film at Lincoln Center membership? Leaning into coverage of classic cinema and the increasing range of content on streamers has the potential to attract more advertising, but would that dilute its identity?

“Today there is as much great writing on film as there ever was — possibly more — but most of it is online, thus harder to get hold of, more ephemeral,” Haskell said in an email. “The cinema, to its greater glory, is far more inclusive, with the marginal and the overlooked getting their due. But this makes for a massive amount of films competing for our attention. If anything, we need a magazine like Film Comment more than ever, to help us make sense of it all.”

Publishing in the 21st century is a brutal business. Even the tony Conde Nast is fighting its One World Trade Center landlords to break the 25-year lease it signed in 2014. Survival means keeping costs low and seeking creative opportunities in a demanding ad sales market. Film at Lincoln Center wants to find funding for its future, whatever form it takes. Meanwhile, magazines die all the time; the ones that survive often succeed by exploiting their own brand potential.

Branding doesn’t really resonate for Film Comment. As John Waters told me over the phone, he loves Film Comment because “I love the most obscure film criticism. I’m for the art of writing that infuriates people.”

Waters, who said he loved that the “uppity” Film Comment put his “Polyester” star Edith Massey on the cover for his 1981 interview, hopes the print edition continues; he reads his back issues on airplanes. “They look at you like you’re crazy. I feel terrible; I’m not a Luddite. I’m on the computer all day looking at people in squares. I like to sit in bed with a magazine!”

Mon Aug 24 , 2020
(Bloomberg Opinion) — At a time of high U.S. unemployment and in an election year, the H-1B visa program has become a hot-button issue. President Donald Trump in June ordered a temporary ban on such skilled foreign workers, though his administration has carved out exceptions after court challenges by business groups […] 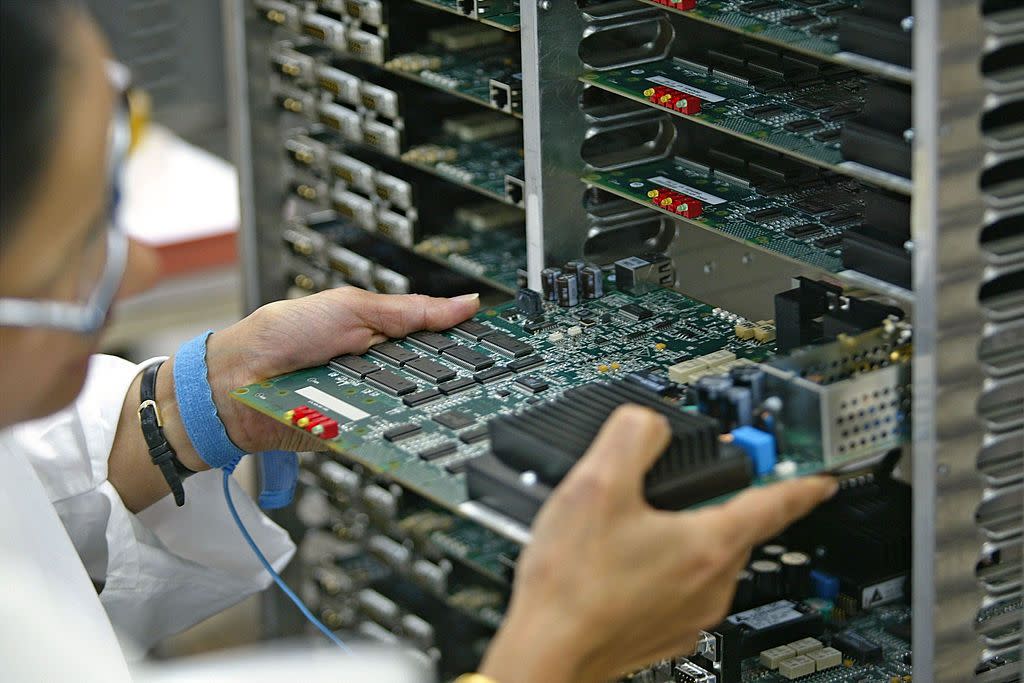