Alli Webb never expected to grow a mobile blow-out business into a multimillion-dollar hair care empire when she first went to beauty school in her late 20s. But over a decade later, she’s done just that.

Webb is the cofounder of Drybar, the hair salon chain known for exclusively offering blow-outs. She launched the business with her then-husband and her brother in 2010. In the decade since, Drybar has expanded significantly, with over 100 locations nationwide and a product line carried in major beauty retailers like Sephora.

Now, Webb, who had a background in PR before switching careers to hairdressing, is ready to launch her next venture: Squeeze, a massage chain modeled on Drybar that allows clients to book and pay for their massage online for a quick, easy, and cashless experience.

In an interview with Business Insider, the 45-year-old beauty entrepreneur talks about her two businesses, how she got her start in hair care, and what advice she has for aspiring entrepreneurs.

“My parents are entrepreneurs, so I think there is something built-in — a lack of fear.”

It felt normal for me to be like, ‘Oh, I have an idea. I should start a business on it.’

I think a lot of people don’t have that mentality necessarily built-in — but I certainly did. And I had started other businesses, little businesses here and there, with my brother [Michael] as my business partner.

But the idea [for Drybar] really came from a lot of different things. As a little kid, I always wished there was a place like Drybar for me to go.

“Long story short, I went to beauty school when I was in my late twenties.”

I became a hairdresser, and I spent the next 20 years doing hair. I had two kids and became a stay-at-home mom, which I thought would be my last gig. But after five years of staying home with my kids, I just really got the edge to get back out there.

So we started a mobile blow-dry business, because I had spent 20 years in the industry. I felt like just doing blow-outs was an easy way to get back out there, do something for myself, earn a little extra cash.

I started this little local business really as a way to appease this kind of itch.

“It was not really meant to turn into this big business.”

“I started contemplating: ‘I’m having so much success with this mobile business. We’re happy to expand it and bring on other stylists to help me with all the demand I had.’ But that didn’t seem like the greatest thing to me because I couldn’t control the experience.

So that’s when I went to my brother and said, ‘I think I can turn this mobile business into a brick-and-mortar.’ It was really just a way for me to, instead of me going to my client’s house, they’d come to me.

I think it was a blessing that I wasn’t thinking of it on such a large scale — I was just thinking I wanted a way to accommodate more clients in the business that I was already running.

On expanding her business:

“I tell people all the time: Find people who are good at the thing that you’re not.”

I partnered with my brother, who’d made some money and worked for Yahoo in its early days. He was watching the success I was having with my mobile business, and I was only charging $40 for a blow out. And he was like, you know, maybe there’s something here.

So he put up the money — $250,000 to start the business — and gave me sweat equity, which was the first time I’d ever heard the term sweat equity in my life and I thought that was the coolest concept I’ve ever heard.

Then Cam, my then-husband, started working on the Drybar website. I was lucky in having two really great business partners.

“I was able to kind of learn on the job, if you will.”

I didn’t know the business as my brother did. I certainly didn’t know or understand branding, the way Cam did.

I got them behind this idea. They thought it was a great idea. And so we started building out this concept and really thinking it was going to be my one little shop where I would be able to manage the shop and pick up my kids from school. At the time we started, my kids were 3 and 5, and now they’re 13 and 15. So that was the dream.

We just had no idea how it would resonate with women. People were coming out enjoying coming to the shop. And it was in the middle of the recession. At the time when we first opened, we were charging just $35.

We realized very, very quickly that we were going to need to open more stores in the local region to keep up with the demand.

“Fast forward to now — or to a year and a half ago — when we started Squeeze.”

We had been running and operating Drybar with such success, and it was so amazing and humbling. My brother [Michael] — who’s an amazing guy but doesn’t have any hair and so doesn’t have any use for Drybar personally — and I would always get massages. Michael was getting massages once a week and started to see the similarities.

The parallels between Drybar and Squeeze are interesting. Michael was really frustrated, saying, ‘It’s such a hassle when I want to go get a massage, and I have to call [to book one], and then I go and it’s hit or miss.’ He wondered, why isn’t anyone doing it better?

Before you get to the door, you already filled out your information, your massage therapist knows you, the pressure to use, the music you like, the room temperature you like, the oil you like. You put all of that stuff in before you even walk in the door.

And then when you’re done with your massage, you walk out. That’s it — a seamless cashless experience, and you don’t have to worry about talking to anybody about whatever. We created what we felt like was needed, which was a better massage experience.

Even with Drybar, what I very quickly discovered was that women, they’d come in and you could just see all the stress on their faces. And then when they walk out, there’s this pretty noticeable difference — a pep in their step.

We very quickly realized it’s not just blow-outs we’re selling. We’re selling this happiness and confidence that you get when your hair looks amazing, the way you want it to look.

“And the same is true for Squeeze.”

I mean, I can’t tell you how many women over the years have told me, ‘I never go to a board meeting or an important job interview or a date without a blow-out,’ or just even picking up their kids from school — it’s the inner confidence that it gives them.

Both Squeeze are Drybar are providing things that make you feel really good.

“I think my journey has been interesting, because I didn’t really have the chops, so to speak, to be running a company.”

I’d never done something like this before. I’ve just learned so many things.

In the early days, I was kind of just reacting to things — I’m very reactionary as a person. And that’s something I really had to tame over the years. Probably what I learned best was how to channel my passion and how to listen to other people, take advice from other people, and not be as reactionary.

“Surround yourself with people who are smarter than you and have experiences that you don’t have.”

That’s something that we did pretty early on: bringing in other people to help us grow and scale the business, because we recognized that we didn’t know how to do that.

I think probably the best advice is being open to bringing in other people and allowing them to make decisions. Because at first I made every decision — and then at some point, I had to stop doing that.

It’s so easy to get yourself all over the place. There’s always a million little things, but you have to figure out which things need the most attention, which things are most important for the business and for the people who are working for you, and your clients, all of those things.

“In the early days, when I was doing everything, balancing the business and motherhood was really, really challenging.”

Looking back, I definitely made a lot of mistakes. I think that I tried to find the balance and I remember giving interviews back then and I tried to make sure I was there for the important things and the things that I knew were important to my kids.

I did miss a lot too, and that was a really tough sacrifice that I made. For me, I always felt like if I was a happy mom, professionally fulfilled, that I would be a better mom to my kids. And in a lot of ways that’s true.But in a lot of other ways, I have missed and failed on things.

But such is life — there is no such thing as doing it all perfectly.

Tue Sep 22 , 2020
Vanessa Bryant is suing the Los Angeles County Sheriff’s Department and Sheriff Alex Villanueva over leaked photos from the site of January’s helicopter crash that killed her husband, Kobe Bryant, their 13-year-old daughter, Gianna. The department issued a statement in response on Tuesday. According to the lawsuit viewed by Yahoo Entertainment, […] 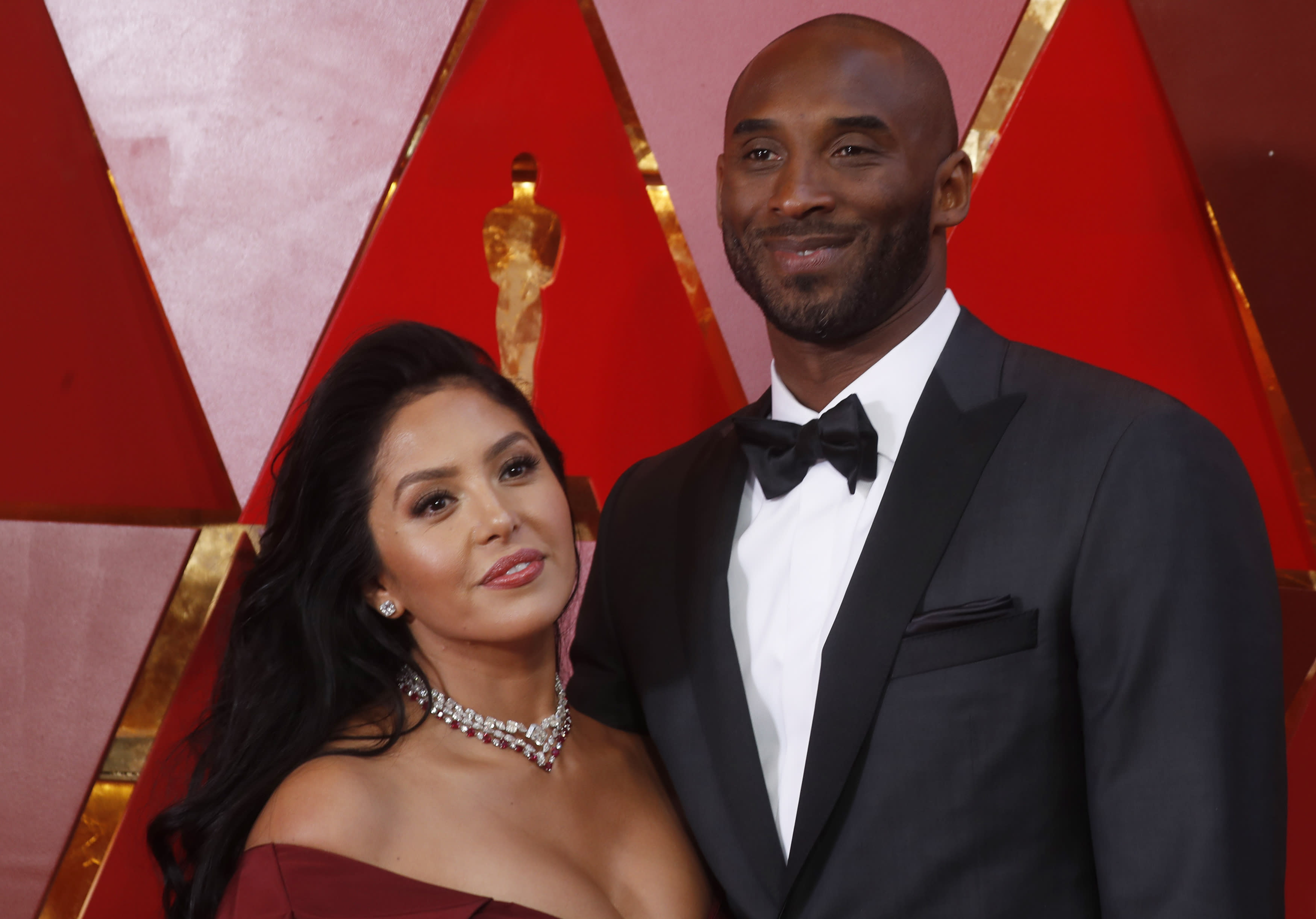