Are there signs of green shoots of recovery for the indie film industry following the profound business disruption wrought by the COVID-19 pandemic?

“We’re living through a rapidly changing time,” says Brian Beckman, CFO of international sales company and producer Arclight Films, which is handling worldwide sales on “The Furnace,” an Australian adventure story, screening in Venice Film Festival’s Horizons section. “I think it feels like the worst part of the situation is now behind us.”

However, many independents realize that there is now a unique window of opportunity for those who are able to make and deliver films.

Some have risked shooting films without specific COVID-19 related insurance, such as L.A.-based finance, production and distribution firm Voltage Pictures and producer/financier Limelight. Others, such as Arclight, are working on getting films into production as soon as they can.

Each of these indies point out that with most filmmaking shut down since March, there is a lack of supply of new movies in the marketplace – one that is only growing month by month.

If a COVID-19 vaccine is ready in the New Year, and the industry starts to return to normal, there is likely to be a substantial incubation period of 12-18 months as new films move from pre-production through to production, post and delivery.

Arclight is looking at backing quality productions that it can “turn and burn” sooner than 12 months, says Beckman. “It’s a unique challenge, but would give us an edge over our competition that is making a bigger film or one that isn’t structured to be done in say, nine months, as opposed to 12 to 18 months.”

Arclight has a number of productions in “holding patterns” right now, says Beckman, including Megan Fox starring suspense thriller “Aurora,” which is set to shoot in Serbia. “We’re really hoping we can get that off the ground before the end of the year.”

Meanwhile, Voltage Pictures president and COO Jonathan Deckter says the firm has shot two movies in Los Angeles during the COVID-19 pandemic, and has another two films that it plans to start shooting next month in Europe.

Deckter won’t reveal details about the projects, but says that none of them have been covered by COVID-19 related insurance – adding that Voltage has put in place stringent COVID-19 production protocols on set. “We’ve got smart, responsible, intelligent folks who are working on these movies. We are taking a bit of a risk – but every movie is a risk.”

“If there’s one thing that 20-odd years in this business has taught me, it’s that us independents don’t stop. We figure it out and we keep pushing through,” says Deckter, who cites currency fluctuations through to COVID-19 as “issues we all face on a daily basis in the independent world.”

“As a group – whether it’s the producers, financiers and sales agents in L.A., or our partners the world over – we are a scrappy, resilient bunch,” says Deckter. “And we don’t generally accept no as an answer.”

Since March, Voltage has released seven films – including the upcoming “After We Collided,” the highly anticipated sequel to “After,” which started its international roll out on Sept. 2.

“How that is going to translate into box office, your guess is as good as mine because one thing we’ve learned during COVID is that nobody knows anything,” says Deckter. However, he points out that “more cinemas are opening every week,” and says the release of “Tenet” will be positive for the independent sector because it will “remind people we all like to go to the movies.”

Indeed, his comments are backed up by analyst firm Gower Street, which reported last week that nearly 65% of global cinemas by market share are now back in business.

Elsewhere, Limelight – which produced, financed and developed Sundance hit “Palm Springs” – is shooting two as yet unannounced movies, both in Canada.

Limelight is self-insuring one of these films, while the other is being made for HBO Max. Limelight is also scouting in New Zealand for its next movie. “We’re trying to go to countries that have very, very low COVID rates, and that have some favorable liability/insurance benefits – Canada being one that is great,” says Limelight president Dylan Sellers.

“We look at the risk versus benefit,” explains Sellers. “There’s a lot of upside right now because there are so few films being made. If you can make a few films during this time, I think there’ll be a real premium in the New Year.”

Limelight has also sold two of its most recent movies during lockdown. Tribeca winner “Cowboys” was picked up last month by Samuel Goldwyn Films, while Ted Melfi-directed dramedy “The Starling” was bought by Netflix in April. Both were sold online. “Financially, we did very well on both,” says Sellers. “Although we didn’t get the fun of being at a festival and having a live audience.”

Is this infamous society con woman about to make an almighty comeback?

Sat Sep 5 , 2020
German heiress Anna Delvey Paywall down Every few years, a story will capture the public imagination and become something akin to a parable for our times. In an age in which the Kardashians and their ilk can earn billions out of their ‘curated’ lives, these stories tend to be ones […] 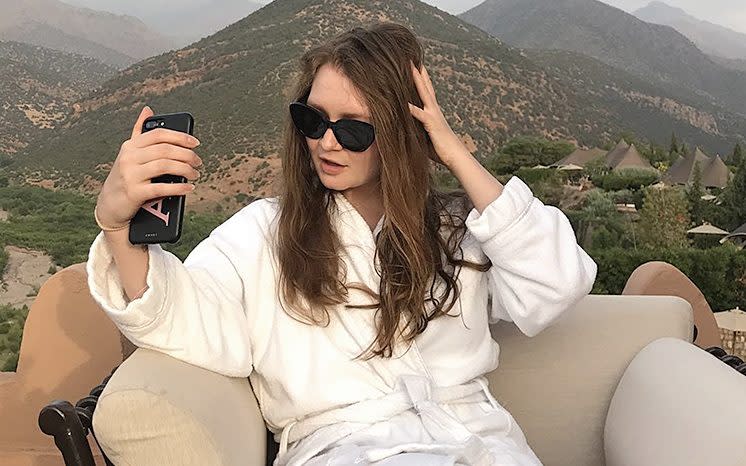