Plus: School looks different depending on which county you’re in. Voting at Dodger Stadium? And crowds are flooding into parks.

Greetings from Palm Springs, where we’re about to be engulfed by a brutal heat wave! I’m Rebecca Plevin, The Desert Sun’s immigration reporter and its most dedicated ice cream-eater.

But first: It’s fire season, and several big ones are burning. Evacuations were ordered in parts of northern L.A. County as Lake Fire grew to 10,500 acres near Lake Hughes, in Angeles National Forest north of the Santa Clarita Valley. To the east, officials issued mandatory evacuation orders Thursday as the Ranch Fire threatened Azusa’s Mountain Cove community. But in some good news, the containment of the 33,424 Apple Fire burning in the San Bernardino National Forest has grown to 80%.

In California brings you top Golden State stories and commentary from across the USA TODAY Network and beyond. Get it free, straight to your inbox.

Kamala ‘ready to go to work’

“You ready to go to work?” Biden asked her.

“Oh my God. I am so ready to go to work,” Harris replied.

USA TODAY walks us through this year’s vice-presidential vetting process, which included virtual meetings due to the coronavirus pandemic. Biden and his team spent 120 hours interviewing 11 serious candidates for the role before eventually narrowing it down to Harris. In doing so, Biden named the first Black woman and first Asian American to a major party presidential ticket.

Also, did you know that between Biden, Harris, President Donald Trump and his veep, Mike Pence, Harris is the only one who drinks? The San Francisco Chronicle says she has good taste in wine.

Oh, and if you’re still not sure how to pronounce Kamala, here’s an article that can help.

The announcement immediately set off another round of speculation: If Biden and Harris win in November, who will replace Harris in the Senate? Gov. Gavin Newsom would choose her replacement and would likely consider gender, geography and demographics.

Back to school, kind of

Students are going back to school as California is possibly on the cusp of reining in this summer’s COVID-19 surge. But what school looks like varies depending on where you live.

In Shasta County, some students returned to school this week, wearing masks and practicing social distancing. They are following a hybrid schedule, which includes a blend of distance learning and in-person classes.

The Los Angeles Times, meanwhile, surveyed 45 Southern California school districts and found “profound differences in distance learning” among children attending school districts in high-poverty communities, like the Coachella Valley, and those in more affluent ones.

“These inequities threaten to exacerbate wide and persistent disparities in public education that shortchange students of color and those from low-income families, resulting in potentially lasting harm to a generation of children,” the Times found.

Will lawmakers act on eviction protections?

California will resume eviction and foreclosure proceedings on Sept. 1 unless the state Legislature takes action. That comes after the Judicial Council of California, the court system’s rule-making body, on Thursday voted to end temporary statewide protections for people who encountered financial hardships during the coronavirus pandemic.

Many local governments, including most of the state’s largest cities, have put in place their own eviction and foreclosure protections that will continue beyond Sept. 1, the Associated Press reports.

But people living in cities and counties without such protections — including those in some Coachella Valley cities and in unincorporated Riverside County — are subject to state rules. Some fear a wave of evictions similar to when the housing bubble burst at the start of the Great Recession more than a decade ago.

Families across California were already struggling to pay their bills.

In Ventura County, prolonged unemployment has stretched budgets that were tight before the coronavirus.

Ventura County resident Kim Casten has “always kind of lived paycheck-to-paycheck.” Casten — who worked for an entrepreneur and public speaker, and booked her boss’ events around the country — lost her job in March as public speaking events were canceled due to the pandemic.

Now that the extra $600 in weekly unemployment benefits has expired, she’s making some tough decisions for her family. Over the past few weeks, Casten got rid of the family’s cable television, resubmitted her healthcare application to get a lower premium, and renegotiated her car and renter’s insurance policies for lower rates.

And in San Joaquin County and other rural areas, farmworkers are facing eviction. They are scared their immigration status will be used against them if they don’t comply with landlords, the L.A. Times reports, and they have little access to either legal advice or government aid. Undocumented people have also been ineligible for many forms of financial assistance, including unemployment benefits and the $1,200 federal stimulus payments.

Are you heading to the mountains this weekend to escape the heat and the news?

“There has been an unprecedented uptick in visitors,” said Forest Service Public Affairs Officer Zach Behrens. “It’s like a Black Friday parking lot every weekend, and it’s gotten worse this summer.”

The permit system will help relieve overcrowding at trailhead parking lots and reduce damage to vegetation caused when hikers pass one another on crowded trails, he said.

The department will issue permits for 144 hikers per trailhead in San Gorgonio and Cucamonga, and limit permits to 30 for the popular entrance to San Jacinto at Devils Slide Trailhead on Saturdays and Sundays through Labor Day. A maximum number of 12 people will be permitted per group.

Pro tip: I hiked from the Devils Slide Trailhead to Tahquitz Peak last Saturday. I recommend bringing sunscreen and plenty of water, and grabbing some post-adventure refreshments on the Idyllwild Brewpub’s socially distanced and dog-friendly patio afterward.

This article originally appeared on USA TODAY: California: How Kamala Harris got the call, will Legislature halt evictions?

Fri Aug 14 , 2020
By Karen Freifeld (Reuters) – Michael Cohen, U.S. President Donald Trump’s former personal lawyer and fixer, on Thursday promised to show how Trump cheated in the 2016 election with Russian help in an upcoming book titled “Disloyal, A Memoir.” “Trump had cheated in the election, with Russian connivance, as you […] 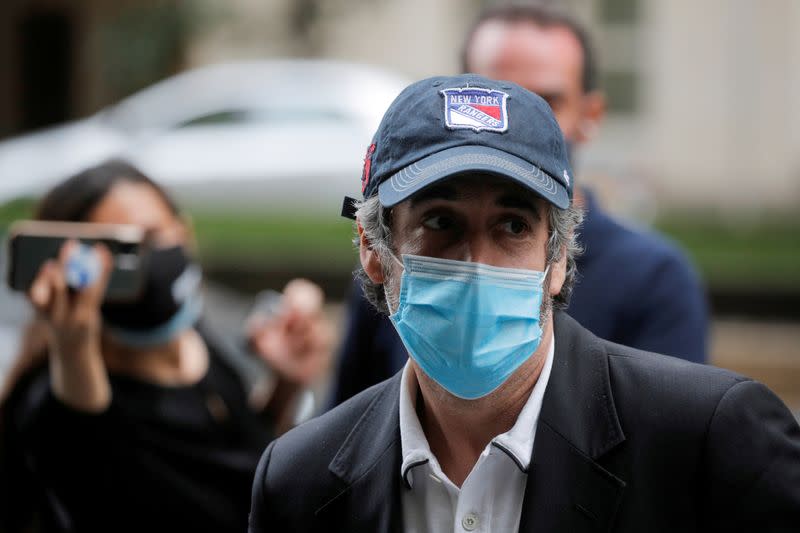