Advanced technology is not only making cars safer and easier to drive, it’s also making them nearly impossible to repair. Cashing in? Dallas-based Copart and the father-and-son-in-law duo who pioneered selling wrecks on the Internet.

On a sprawling 97-acre lot beside railway tracks and auto repair shops in a section of eastern Long Island that’s definitely not the Hamptons, forklifts maneuver through a neatly organized salvage yard, moving everything from weathered pickup trucks to an almost-new Lotus coupe. This is no ordinary junkyard. Everything is coordinated electronically: The forklift drivers follow a meticulous schedule laid out on a tablet. Each car, be it a lightly battered BMW or a totaled Toyota, has a numerical code on the windshield so it can be digitally identified, inventoried and then moved to its corresponding spot in the sales area. In the squat, one-story building out front, customers who bought a vehicle online wait to pick up their newly purchased wreck after scanning a QR code on their phones.

The well-oiled routine is mirrored at 243 Copart-owned junkyards across the U.S. and around the world. The publicly traded, Dallas-based firm dominates the market for processing and reselling salvage cars — vehicles damaged enough to be written off as a total loss by auto insurers. Copart gets paid, mostly by insurance companies but also by rental car companies, car dealerships and individuals, to take the wrecks off their hands. It then auctions them off on the Internet — either to dismantlers who want them for parts or to buyers who repair them to use as drivable cars, particularly in overseas markets with looser auto-safety rules.

“We took a relatively unsophisticated business where they were selling cars over an oral auction, and turned that into a business that receives a hundred billion dollars a year in bids and is doing 100% of it online,” says Copart’s 51-year-old CEO, Aaron “Jay” Adair, in a Zoom call with the company’s founder — and his father-in-law — Willis J. Johnson, 73. “Nobody has to be at our yard,” adds Johnson. “When we’re having an auction online, it doesn’t matter if Florida is having a tornado; we’re selling cars.”

It’s a lucrative business: Copart booked $700 million in net income on $2.2 billion sales in its 2020 fiscal year which ended in July, increasing its profits by 18% from the previous year despite the pandemic. Both Adair and Johnson have become billionaires thanks to a nearly 150% surge in Copart’s stock since January 2019. Forbes estimates that Johnson, who owns a 6% stake in Copart, is worth $1.8 billion; Adair owns 4%, comprising the bulk of his $1.1 billion fortune.

Leveraging its network of high-tech auto lots, salvage giant Copart is crushing it during the pandemic, outpacing its longtime rival IAA.

Counterintuitively, all the cutting-edge technologies designed to reduce crashes are good news for junkyards. Sure, bumper-mounted lidar sensors and autopilot systems may result in fewer accidents, but vehicles that do get totaled are in much better shape and easier to resell to new buyers. And since the high-tech gizmos in newer cars are expensive (or impossible) to fix — even after minor damage — insurance companies are increasingly scrapping them, even for fender-benders that would have been easily repaired a decade ago.

“If you have a front-end collision and you’ve got an automated driving system on your car, that repair [price] goes up five or six times just to fix that bumper with the sensors,” says Gary Prestopino, an analyst at Chicago-based investment bank Barrington Research. “There’s so much technology on these vehicles now that the prices just keep going up.”

Copart began in 1982 when Johnson bought a majority stake in a small auto auction business in Vallejo, California. Born in Clinton, Oklahoma in 1947, he was drafted into the Vietnam War six months after his high school graduation and was wounded in combat before returning to the U.S. at age 20. After a brief spell at a Safeway grocery store in Spokane, Washington, he returned to California, where he worked at his father’s wrecking yard before leaving to buy his own in the outskirts of Sacramento. Johnson lived in a trailer on the yard with his wife and three kids and spent the next several years dismantling cars and trucks. In 1982 he bought the auction lot in Vallejo, a Bay Area exurb about 30 miles northeast of San Francisco, and started buying up more lots in northern California. He brought on Adair, then 19, as a manager in 1989.

In 1991, Johnson decided to take his fast-growing company public after reading that his largest competitor, Insurance Auto Auctions (IAA) — still Copart’s main rival today – was planning a public listing and wondering why Copart couldn’t do the same. Copart’s IPO happened three years later, and Johnson ploughed the proceeds into buying more junkyards across the U.S.

The next breakthrough came in 1998, when Adair, by then Copart’s president, revolutionized the salvage industry by pioneering online car auctions, just two years after launching the company’s first website.

That same year, Adair and Johnson did away entirely with in-person bids and opened up Copart’s lots to buyers from around the world. Seven years later in 2010, Johnson stepped down as CEO and handed over the reins to his son-in-law, who took Copart into Brazil, Europe and the Middle East.

That international presence, paired with its technological edge, is what still sets the company apart from IAA in a sector that is a virtual duopoly, according to Baird analyst Craig Kennison. Astonishingly, IAA didn’t fully embrace online auctions until 2015, twelve years after Copart did.

“Once Copart moved onto the Internet, they were able to discover a massive number of buyers with interest in these cars,” says Kennison. “And now it’s at a global scale where they have buyers literally all over the world.”

Adair likes to call Copart “recession-proof” and “pandemic-proof.” After the financial crash in 2008, the price of used vehicles fell as would-be car buyers cut back on spending. But that same price drop also made it cheaper for insurers to write off lightly damaged cars and dump them entirely, sending more salvage cars to Copart’s lots and generating more fees from hauling them away.

At the start of the pandemic this past spring, the opposite happened, but again with positive effect: Fewer people were driving, leading to a decline in accidents, which meant insurers were totaling fewer cars. The decrease in the supply of wrecks meant that Copart was paying more for each one. But higher prices also ensured that Copart made more money on the portion of its business that sells fixable cars. Nice business. Higher prices? They profit. Lower prices? They profit.

Copart’s lots were considered essential and stayed open during coronavirus lockdowns, and the firm didn’t lay off or furlough a single worker. Instead, the debt-averse company drew down $1.1 billion from a credit line to refurbish its locations and roll out new online services, including the virtual QR code queues on display at the Long Island yard.

“There’s a natural hedge that exists in our business where in both directions, whether sale prices go up or down, volume compensates for that,” says Adair. “And we saw that during Covid. We generated more profit this year than we did last year, because the vehicles are selling for significantly more today than they were a year ago.”

Adair estimates that about one in five cars today are totaled after an accident due to their expensive new technology, up from roughly one in 10 when he got his start in the late 80s; analysts say that number is set to rise, perhaps to as high as 50%, as more advanced cars replace older models on the road.

“You used to have a TV repairman, and now when a TV breaks, you throw it away,” says Adair. “Cars are [going] more and more in that direction. That’s the best trend we’ve got going for us.”

Here's Why Investors Should Hold on to Chipotle (CMG) for Now

Mon Nov 16 , 2020
Chipotle Mexican Grill, Inc. CMG is poised to benefit from digitalization, menu innovation and unit expansion. Moreover, initiatives like redesigned online ordering site, online payment for catering and meal customizations bode well. In the past six months, shares of the company have rallied 25.3% compared with the Zacks Retail – […] 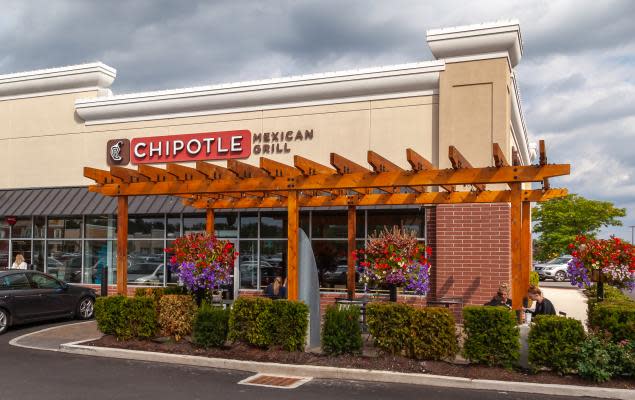