CARLYSS, La. — Karla Broussard was standing under the awning of her liquor store on Friday, to stay dry in the rain. All around her the town of Carlyss was a mess. Hurricane Laura had not been kind.

Power lines, and the poles attached to them, draped the Louisiana roads. The steeple at the First Baptist Church of Carlyss lay in a pile of debris by the front doors. Some homes and businesses were see-through, with missing roofs, walls, doorways. The skies were gray. Thunder rumbled in the distance.

“This is way worse than Rita,” she said, echoing the sentiment of many in the region this week.

Broussard was referring to Hurricane Rita, the massive 2005 storm that tore ferociously through southwest Louisiana and East Texas a few weeks after its more infamous cousin, Hurricane Katrina. It was Katrina, which crippled New Orleans and killed more than 1,500 people, that got the world’s attention. But out in the wide-open, working-class, oil-patch country to the west of New Orleans, it was Rita that became the benchmark storm for a generation.

In a place like Carlyss, a town of 6,000 people just west of Lake Charles, Rita is the storm all others are judged against. It leveled some small coastal communities almost completely and was the first to seriously rattle the area since Hurricane Audrey, which killed more than 400 people in 1957.

But perhaps most significantly, Rita forced changes in regulations and attitudes that may have saved lives when Laura roared ashore early Thursday morning with 150-mph winds — one of the most powerful hurricanes to hit the U.S. mainland.

Jim Beam, a longtime columnist for the American Press newspaper in Lake Charles, said that the memory of Rita probably prompted people to take evacuation orders this week more seriously than they had before. Roughly half a million people evacuated this week in advance of the storm, which may have contributed to its relatively low death toll of 14 people.

“My personal experience from Rita convinced me that this time, when they tell you to leave, you’d better leave,” Beam said.

Katrina and Rita also led to changes in construction codes to make buildings less vulnerable to the violent winds and ruinous floodwaters of major storms. Some homes close to the coast were elevated as high as 14 feet or more.

“While this is not the case universally, you can tell that some of the buildings built post-Rita held up better than buildings built pre-Rita,” Mayor Nic Hunter of Lake Charles said on Friday. “I am sitting right now on the sixth floor of historic City Hall and there are no broken windows because all of them were replaced after Rita.”

That was not the case in much of Lake Charles, one of the hardest-hit communities. Hunter said every neighborhood in his city of 78,000 people had seen damage in the storm. No one had electrical service, he said, but the city was banding together, clearing roads of debris and welcoming the help of the National Guard and a small army of government workers.

Of the 10 known deaths in Louisiana, four people were killed when trees fell on their homes, one person drowned in a boat, and five people died from carbon monoxide poisoning related to the use of generators, Gov. John Bel Edwards said at a news conference on Friday. East Texas, which braced for the worst but was not as badly hit, had four reported deaths as of Friday, according to The Associated Press, including three people who died from carbon monoxide poisoning in Port Arthur.

Edwards said that Louisiana requested a major federal disaster declaration from the White House around noon on Friday, and he noted that there were about 6,200 members of the National Guard working on recovery efforts.

At least 82 water systems were inoperable on Friday, he said, causing a rolling series of evacuations from nursing homes and hospitals. He also reminded residents that the coronavirus pandemic had not disappeared and that community testing sites — which closed as Laura approached — would reopen by Monday.

“This is a very bad week for us not to be doing robust testing,” he said.

As the storm loomed offshore and grew to Category 4 strength, Edwards repeatedly made comparisons to Hurricane Rita, saying Laura resembled Rita in its intensity and path, hoping to telegraph a sense of the gravity of what might be coming.

When it finally made landfall near Cameron, Louisiana, in the dark early-morning hours of Thursday, Laura’s anticipated “unsurvivable” storm surge of 15 to 20 feet was more like 11 feet, at most. Still, Laura unleashed misery and ruin. And most everyone agreed that the wind damage was as severe as — or worse than — Rita, which landed as a Category 3 storm with 120 mph winds.

In the aftermath of Laura, residents across southwest Louisiana took part in a stressful and familiar post-storm dance, returning home to survey the destruction.

Some residents whose homes were inaccessible because of flooding could only squint at overhead photos. In a Facebook group, people swapped numbers for contractors, roofers and lawyers — and photos of crushed trailer homes, demolished stores, and fields of storm-tossed debris.

Many residents wondered whether the post-Rita building codes had put them in a better place.

“I had my home rebuilt after Rita. I remember the inspection process being a bit of a nightmare,” Taryn Scarborough, a Lake Charles resident, wrote in an online message. “It took a couple inspections and modifications before the roof inspection passed. Needed hurricane ties and additional bracing and soffits with air flow.”

“We’re headed to Lake Charles now to see if all the work we put into rebuilding 15 years ago made a difference,” she added. “Fingers Crossed!”

If Rita taught the people of the region to be prepared for storms that seemed more intense and frequent, that lesson could only do so much. Each storm, it seems, delivers its own quirks, cruelties and vicissitudes.

On Friday afternoon, Marlon Gardner, 42, was busy sweeping up the branches and detritus on Monroe Street. In a city that is a shambles, at least one small patch was smooth and clean.

Gardner, a Lake Charles native, has lived in a house on Monroe Street off and on since he was a child. It survived Rita with a few scratches and a few missing shingles. This time, though, it took a beating.

Large sections of the roof lost shingles. An addition he had built at the back of the house was ruined. The rain that fell on Lake Charles on Friday fell inside Gardner’s home. All along his neighborhood, trees sliced into homes, cracked in two or took down power lines.

As Laura had approached, Gardner initially decided to ride it out and stay in Lake Charles. But as the storm got closer, his relatives kept calling him, pleading for him to flee. He finally did, traveling to Dallas.

“I think the lesson that was ultimately learned is — get out while you still can,” Gardner said of Rita and Laura. “This time, more people took heed and got out.”

Now, he added: “Everybody’s trying to get home. Some people are on their way now.”

Next is the familiar drudgery. The weeks of it. The months.

Fired as a hotel housekeeper when she got COVID-19, she now has no income or healthcare 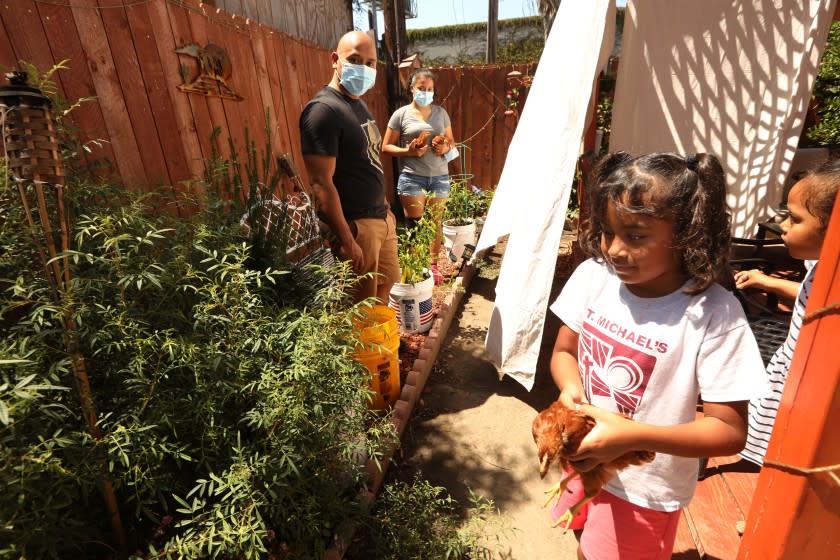