Although several albums hit streaming platforms released yesterday, Brooklyn, NY-based indie rapper D Prince — an emerging artist who is also an avid footwear and fashion fan — felt it was more appropriate to deliver his latest project, “Handsome Villain Vol. 1: Dawn Of A Prince,” on the Fourth of July.

“I chose to drop the album on Independence Day because it’s a metaphor that relates to my freedom as an indie artist. I did all of this with no big time manager, no label, no PR person, no law firm, and no booking agent — just me,” he said. “I love having the freedom to create art and put it out whenever I want. You can never put a price on that.”

The rapper’s new 14-song effort, which he said will sound fresh among the sounds of today with the quality lyricism of the 1990s, released today on his own label, Top Shelf Enterprises. Although his latest project can be streamed now, D Prince is equally as keen to talk footwear. The fashion fanatic, he said he owns an eclectic collection today featuring classic sneakers, Clarks Wallabees and boots from Frye, among other distinguished looks.

Below, D Prince talks his favorite sneakers to perform in, the brand you’ll never catch him wearing and delivering more music before year’s end.

Footwear News: What can people expect from your new album?

D Prince: “People can just expect a dope rap album with remnants of the ’90s as well as some new school flavor. I wanted to make an album that can compete with the modern sound of rap music, while simultaneously remaining lyrical and fresh. There’s also a lot of storytelling on there too, which is pretty much nonexistent in mainstream rap. I’m cut from the same cloth as [rap storytellers] Nas, Slick Rick, Raekwon and Ghostface, so I felt a personal duty to carry that torch.”

How, if at all, did the direction or tone of your album change given the current climate concerning both racial injustice and the COVID-19 pandemic?

DP: “The album was already done by the time this pandemic fully kicked in. However, after the killing of George Floyd, I was really depressed, then my brother DJ Pause reached out to check on me and that’s how we ended up recording ‘The Ills.’ We released it right away and the response was so good that I decided to throw it on the album.”

What is your favorite footwear to wear on stage?

DP: “My collection is a blend between streetwear and casual chic. You’ll see some [Nike] Air Force 1s aka Uptown’s — [especially the] ’07 LV8 Utility Overbranding. Of course some Reebok Classics in all white, a pair of Clarks Wallabees in all red, Saucony Original Azura, I got the vintage [Nike Charles] Barkley’s and the Shawn Kemp [Reebok] Kamikazes, which I keep in storage. I’ve got a pair of Mr. B Wingtips in tweed and leather — them joints are crazy. It all depends on the weather and mood too. I might step out with some camo loafers. I got about 10 pair of kicks, about three pairs of boots — I always keep a good boot game. I haven’t owned a pair of construction Timbs in a minute, however the Frye Boots Harness 8R are my go-to, they’re pricy as hell but super fashionable and sturdy.”

How invested are you in sneakers today? Do you buy as frequently as you used to?

DP: “I’d say I’m still heavily invested in the sneaker culture. I don’t shop as much as I used to but I keep my finger on the pulse of what’s dope and what’s out there. If I’m going to go buy sneakers, I’ll drop the bread on them, I won’t play around with it.”

What are your go-to shopping spots for footwear?

DP: “I do a lot of my shopping online but when I’m out I definitely go to Kith on Broadway or on Flatbush [Avenue in Brooklyn] or Flight Club.”

Is hip-hop too focused on fashion and aesthetics?

DP: “I don’t think so, I believe hip hop and fashion go hand in hand. Take the Adidas Shell Toes. If you’re from the era I’m from then you absolutely know that is the official shoe for hip-hop. And Jordans literally have their own culture that coincides with rap music I think fashion will always play a part in hip hop in some shape or another.”

What is the most you’ve ever paid for a pair of shoes?

DP: “The most I’ve spent on a pair of kicks is $300 and that was an auction for the Nike Air Mission PRM ‘Oregon Ducks.’”

What is the least you’ve ever paid?

DP: “The least I’ve ever spent was like $40 on a pair of Etonics, but that was years ago.”

What sneakers won’t you wear?

DP: “I’ll never wear a pair of New Balances ever again, even if they paid me.”

After “Handsome Villain Vol. 1,” what music releases do you have coming up?

DP: “‘Handsome Villain Vol. 2’ is dropping in September, that’s pretty much done, just tweaking as we speak — it’s going to be crazy. Working on this Fresh Vetz [duo with DJ Pause] album as well, that will be out sometime next year. I’m always in the studio so maybe another ‘Short Stories 2.’ Ain’t no telling, I’ll never stop until I get the respect I deserve as an emcee.”

Sat Jul 4 , 2020
This article was originally published on ETFTrends.com. Total ETF flows are $202 billion year-to-date through the end of June. June alone saw $58.5 billion. The story has remained the huge numbers going into bonds. ETF Trends Director of Research and CIO Dave Nadig joins Yahoo Finance’s Sibile Marcellus on “The […] 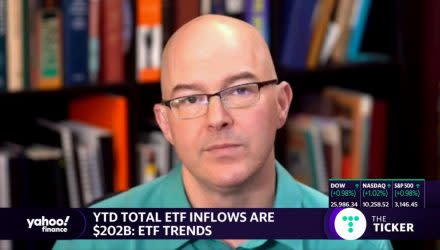