A weekday afternoon in Leeds city centre and a furious speaker is telling a crowd of 40 or so onlookers that coronavirus is a scam dreamed up by a shadowy cabal of global elites seeking to control the rest of us.

“This is not a conspiracy theory,” she shouts to applause. “This is Bill Gates.”

She found the truth, she tells me later, after starting to question the world while in lockdown. Where was it? In Facebook posts and YouTube videos, apparently. “But they get removed so fast,” she says. “Because they’re part of it too.”

Welcome to the West Yorkshire leg of the Covid-19 Truth Tour, a 27-date whizz around the UK by a motley crew of corona-sceptics. People here are anti-lockdown, anti-mask and anti-vaccine but, most of all, anti- (deep breath) the big pharma-finance-media-science-tech-industrial complex which, they say, has either created or exaggerated coronavirus in a bid to make the rich richer, remove the freedoms of the rest of us and create a single over-arching world government.

“It’s not just Bill Gates,” explains the man behind it all, a 57-year-old who gives his name only as Allegedly Dave. “He’s just one of them. They control the world’s banking system, most governments, the World Health Organisation.”

Why create coronavirus? “They’ve decided there are too many of us, too many useless eaters so this vaccine will implement technology that makes us controllable.”

Suffice to say, even with an open mind, it’s all very surreal.

Talking to the people here is a whirlwind of disparate reference points – paedophilia, protests in Belarus, Northern Rail’s face covering policy – which all somehow lead back to that secret elite. One chap, John Wantling, a retired college worker, says he wrote to the latter, Northern Rail, complaining that its requirement for masks on trains was the first step towards global martial law. “They haven’t written back yet,” he notes.

There are, it should be said, legitimate concerns raised throughout the afternoon – a looming mental health crisis, a tanking economy, the safety of potential vaccines. It’s just that those raising them soon veer off down rabbit holes of paid-off scientists, microchipped populations and, as is the way of these things, a whole buffet’s worth of anti-Semitic tropes. If Microsoft boss Gates is villain number one, George Soros gets a decent kicking too.

In normal times, of course, all this might fall somewhere between being vaguely distasteful and vaguely comedic. In Leeds today, there are raised eyebrows aplenty from passers-by.

Yet in the midst of a global pandemic there is increasing concern the misinformation being pumped out by such conspiracy theorists is a growing danger both to public health and to the trust in institutions and expertise that underpin western democracies.

The worry, ultimately, is that, as oddball as this stuff is, it appears to be gaining traction with a wider audience, spilling over into mainstream thought and contaminating both reasonable debate about coronavirus and trust in evidence-based science. Those who engage with such crank theories, research from Anglia Ruskin University has already found, are less likely to follow public health guidance.

“Left unchecked, these ideas do have the potential to cause real social dislocation,” says Dr Jovan Byford, senior lecturer in psychology with the Open University and author of Conspiracy Theories, A Critical Introduction.

That more people are engaging with them in our corona-age than ever before seems certain.

More than 10 million people worldwide have viewed the pseudo-documentary Plandemic, while some 147 online anti-vaxx accounts and channels – the sort of depositories where parents are told not to get their child a polio jab – have seen their audiences grow by 9.2 million since the start of lockdown, according to the London-based Center For Countering Digital Hate. One series of Facebook posts linking 5G to Covid-19 have not only gone viral but resulted in attacks on phone masts. Some 75 across the UK have been destroyed or vandalised, according to Mobile UK.

Most of those, the trade body notes, did not actually contain 5G transmitters.

Worryingly, perhaps, many of these ideas are now blending with – and popularising – the longer running QAnon conspiracy theory, a convoluted favourite of the American alt-right which contends Donald Trump is at war with Satan-worshipping paedophiles (mostly Jewish, obviously) who covertly rule the world. Members of QAnon groups on Facebook have increased by 120 per cent since March according to the Institute for Strategic Dialogue. When an estimated 10,000 people demonstrated against coronavirus measures in London at the end of last month, their banners and placards were everywhere.

Simultaneously, those promoting so-called scamdemic ideas have seen their profiles soar. David Icke – who spoke at the above London rally – is now garnering the kind of admiration for his thinking one would have assumed probably wasn’t possible for a man who claims the Royal Family are literally interdimensional lizards. Another, Kate Shemirani, a suspended nurse who has become a figurehead of the anti-vaxx movement, has trebled her Twitter followers over the last month despite (or perhaps because) of such bon mots as comparing lockdown to the holocaust.

When are people going to wake up, she asked in one post. “On the cattle truck? Or in the showers?”

When I ask her about this comment during a phone conversation, she doubles down hard. “There is tyranny afoot,” the 54-year-old declares before asserting there is no evidence a new coronavirus even exists. “And I believe – I am absolutely certain – with a new vaccine, you will see an exponential rise [in deaths] because of it. So, I don’t know what you call what’s going on but I call it genocide. I call it murder.”

On Saturday she spoke at a 2,000-strong rally where 32 demonstrators were arrested amid clashes with police. “Real men,” she said of the protestors afterwards. Her following continues to grow.

The big question, then, perhaps, is why such demonstrably crank opinions have found a relatively large constituency over the last six months.

“Covid has created the perfect storm for conspiracy theorists,” says Imran Ahmed, boss of the Center for Countering Digital Hate. “People have been isolating at home, spending more time online without their normal access to friends and work colleagues who might otherwise act as sources of information and common sense. At the same time, they have been eager to find information at a faster speed than it becomes available, leading them to online spaces that offer false answers.”

“Conspiracy theories tend to flourish when there is uncertainty, when something dramatic happens, and when official expiations for what is going on are either perceived to be inadequate or there is a discrepancy between the explanation and the gravity of a situation,” he says. “It is cognitive dissonance coming into play. An event has such dramatic consequence on people’s lives that surely it requires a more dramatic explanation than simply, in this case, being a virus that has migrated from one species to another.”

With concrete information about the virus still being gathered – and with scientists and governments alike often arriving at hugely different conclusions even from agreed data – hoax theories have offered (false) certainty to people in a period of acute stress, he adds.

“It gives a narrative that makes sense of what is a complex situation,” he explains ” By creating scapegoats, it gives an object for those feelings of anger or rage which, otherwise, we do not know where to direct.”

Some celebrities have not helped.

Madonna, Alan Sugar, Woody Harrelson and Amir Khan have been among those who have promoted coronavirus conspiracy theories on social media, giving these debunked ideas a huge audience. Lewis Hamilton, shared a video with his 18 million Instagram followers suggesting a vaccine might be used to microchip people. Who would be behind such a dastardly deed? Bill Gates, the clip indicated. The six-time Formula One world champion later deleted it but not before it had reached huge numbers.

Not content to sticking to social media, meanwhile, the singer Van Morrison has put the message to music. In three new songs, he appears to question the existence of Covid-19. “Scientists,” he sings on one, “making up crooked facts…pretending it’s for our safety, when it’s really to enslave.”

Not as good, it’s fair to say, as Brown Eyed Girl.

Either way, while this is not the first time conspiracy theories have emerged to explain pandemics – many thought the 1919 Spanish flu was a German biological weapon – what has now changed, perhaps, is the speed at which these ideas can be shared around and gain support in our online age.

This, indeed, is the puzzle that needs to be solved, say experts. Hoax ideas, crank thought and pseudo-science pumped out by both believers and bad actors alike proliferate at such speed across the web that it is impossible to continually counter it with rational argument and counter-logic.

Facebook alone says it removed 7 million pieces of dangerous Covid-19 misinformation between April and June, and labelled another 98 million pieces as questionable. Yet, estimates by the Center for Countering Digital Hate suggests 95 per cent of all Covid-19 falsities remains online and in tact.

It is, in short, an avalanche. Crucially, it is one to which there remains no satisfactory response.

“We need a combination of advertisers using their power as the main customers of social media platforms, as well as new types of regulation and legislation by government to prevent people being sucked in by the lies of professional propagandists,” says Ahmed.

How easy such proposals would be to turn into reality remains the unanswered question. So too does how effective they would be.

For now, back in Leeds, with things beginning to wind up, Allegedly Dave is telling the crowd the tour will climax on Saturday in London. He wants a million people on the streets for what he calls – a little ambitiously, perhaps – the “rally of the century”.

Does he never worry, I ask, that he might have it wrong and the rest of us – the sheep and the sleepwalking – may have it right? Is he not concerned his words and rallies may put public health in danger, may kill people? No, he says. “All we are doing here is being the antidote to you, the media. We are showing people the real story that is being covered up.”

While the world reels from coronavirus, the next pandemic is waiting in the wings 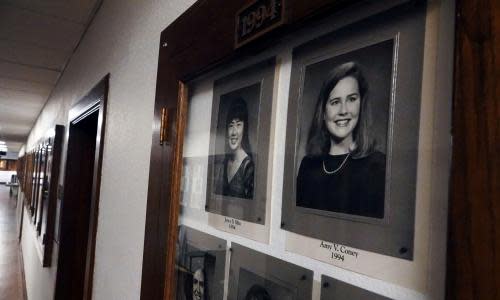