Firefighters tried to take advantage of Saturday’s cooler temperatures as the Creek Fire raged nearly out of control.

The blaze swelled overnight to 196,667 acres with at least 369 structures ruined, including dozens of homes and businesses in Sierra National Forest mountain communities in eastern Fresno and Madera counties.

Containment remained at just 6% midday Saturday as about 1,811 firefighters battled what already has become the 16th largest wildfire in California’s history.

The Creek Fire erupted Sept. 4 near Big Creek and Huntington Lake. The cause remained under investigation. Full containment isn’t expected until mid-October.

The Creek Fire is one of 28 major wildfires racing through California, including 13 new fires that broke out Friday, Cal Fire said Saturday. More than 16,000 firefighters are battling flames statewide.

Cal Fire, in collaboration with the county of Fresno, has released an interactive map of the Creek Fire that includes preliminary information about damaged and destroyed property.

Not all properties have been inspected; that could take two weeks or more.

But the public can access the map online and enter an address to see limited information. It will be updated as time and fire conditions allow, ensuring the safety of those doing the assessments.

It represents only a snapshot in time for a property. Information is subject to change depending on fire conditions and available data.

People can find the map at https://arcg.is/1vaCOP.

“Learning the status of a property during a disaster can evoke a strong emotional response,” a county news release stated. “Support is available.”

That includes a 24/7 Disaster Distress Helpline at 800-985-5990 or via text TalkWithUs to 66746. In-person counseling is available at the evacuation point at the Clovis North/Granite Ridge campus.

Within the next week, the county of Fresno will establish a multi-agency center to serve as a one-stop-shop to provide disaster assistance. More details will be provided as they are available.

Cal Fire continues to monitor several spot fires that began in the area of the Creek Fire. At least seven were spotted in areas east of Shaver Lake.

These smaller fires have not grown to significant sizes, Cal Fire spokesman Daniel Ramey said, but they are a concern as the smoke layer makes it hard to spot them.

He said the spot fires were discovered overnight with infrared technology.

Crews have been focused on corralling the fire in the northern zone using natural structures and barriers. The fire grows each day in the north by about a mile.

There is more confidence in the areas east of North Fork. That is where the incident has progressively seen less activity, according to Ramey.

Containment around communities was a major priority for crews, evident by the line of flames that crept up to Shaver Lake but has left it largely untouched even as homes have been destroyed in smaller communities around it by the fast-moving fire.

As the fire sits at 6% containment, crews can only be confident in extending the containment percentage once they assess areas and determine there are no longer fire hazards.

That confidence, unlike the fire, is still too small for the historic fire.

Fire crews were busy on the highway’s shoulders, cutting trees as they faced a wall of smoke and blackened woods.

National Forest officials said firefighters were taking advantage of the cooler temperatures fuel by air inversion that has slowed the blaze.

But as the smoke began to clear with the setting sun, firefighters braced for winds to pick up and refuel the stubborn flames.

Air quality remains an issue around California, even in communities untouched by fires.

The layer of haze over the Valley is a result of several fires up and down the coast, as wind pushes smoke into a large plume that swirls over the West Coast.

Until fires are extinguished, air quality alerts are active across the Valley, warning residents to stay inside and avoid outdoor activity to reduce harmful effects of breathing pollution.

Plume from massive fires swirling over Fresno area. Here’s how to stay safe

The California Department of Fish and Wildlife on Saturday closed nearly 50 state-controlled wildland areas, including the Kinsman Flat Wildlife Area of the Sierra National Forest in Madera County.

The move comes a day after the U.S. Forest Service shuttered all federally-controlled forests in California due to “unprecedented and historic fire conditions throughout the state.”

Dead trees and wild brush fueled the Creek Fire’s slow burn into Blue Canyon on Saturday, “raising concern that it could become established and make a run into Shaver Lake,” Cal Fire reported.

Firefighters on Saturday were developing plans to attack the fire and protect Shaver Lake.

“Crews are working around the structures looking for hot spots and mopping them up. Similar operations are taking place near homes in the Huntington Lake and Shaver Lake communities,” Cal Fire reported in a mid-morning update Saturday.

Firefighters said the Auberry situation was improving Saturday as they built lines on the fire’s edge from the San Joaquin River east to Highway 168.

Flames south of Mammoth Pools were spreading northeast into the wilderness.

After a week, the Creek Fire ranks among the biggest in California wildfire history

Fresno County sheriff’s deputies and firefighters have searched the area around Cressman’s General Store, which was gutted by the Creek Fire on Monday.

“Their assignment was to check for potential hazards on the property, which contains several fuel tanks,” the sheriff’s office said in a statement. “The owner of the business joined first responders to guide them through the property, pointing out areas of concern.”

Owner Ty Gillett has been helping firefighters remove hazards from around the property since the flames exploded eight days ago.

Gillett earlier this week told The Bee he was there when the historic business he owned and loved, Cressman’s General Store, went up in flames Monday night.

Heavy smoke kept firefighting aircraft grounded early Saturday, but they remained “in a place to fly” at a moment’s notice, according to Cal Fire spokesman Daniel Ramey.

Ramey said for the past two days, pilots have not had the clear to fly due to low visibility of mountain ranges.

The thick air makes it difficult to see.

But smoke and weather were also helping other parts of the effort to extinguish the blaze.

Saturday morning brought more moisture and cooler weather to the area. That is helping crews fighting the fire from the ground. Temperatures have remained on the cooler side of late. Highs were expected to reach the lower 70s around Shaver Lake on Saturday, the National Weather Service reported.

Ramey said although air attack has been minimal in the past few days, progress has been made on the ground.

And while the heavy smoke has meant bad news for the air quality, such conditions have helped keep winds in check, incident meteorologist Matt Mehle said.

The area will transition out of a high-pressure zone Sunday, which will mean higher temperatures and a greater chance of wind that could fan the flames.

The fire swelled overnight to 196,667 acres but containment remained unchanged Saturday morning at 6% due to the blaze’s steady and stubborn growth.

Firefighters said the flames continue to slow as cooler temperatures and climbing humidity aid the effort.

There were 1,811 firefighters combating the Creek Fire as of Saturday, according to Cal Fire. That’s an increase of about 200 since the Thursday night update.

The Creek Fire is one of 28 major wildfires racing through California, including 13 new fires that erupted Friday, Cal Fire said Saturday. More than 16,000 firefighters are battling flames statewide.

As the Creek Fire entered its eighth day on Saturday morning, at least one local televison station’s signal was interrupted in connection with the blaze, ABC30 reported.

The cause of the interruption remained unclear, but Cal Fire spokesman Daniel Ramey told The Bee firefighters are “confident” the transmitters were not damaged by flames. He said there is “no active fire” around the transmitters, which are located near Meadow Lakes.

Ramey said it was possible the interruption was tied to a contractor working on the transmitters but couldn’t immediately elaborate.

It also wasn’t immediately clear whether other area television and radio signals were affected.

“If you usually watch us over the air, please tune to channel 26.7. Some viewers may need to re-scan their channel lineup to be able to tune to this channel,” the station reported on its website.

Viewers with cable or a digital streaming television service were not affected.

Multiple stations lost power earlier this week in connection with the Creek Fire.

Sun Sep 13 , 2020
Firefighters tried to take advantage of Saturday’s cooler temperatures as the Creek Fire raged nearly out of control. The blaze swelled overnight to 196,667 acres with at least 369 structures ruined, including dozens of homes and businesses in Sierra National Forest mountain communities in eastern Fresno and Madera counties. The […] 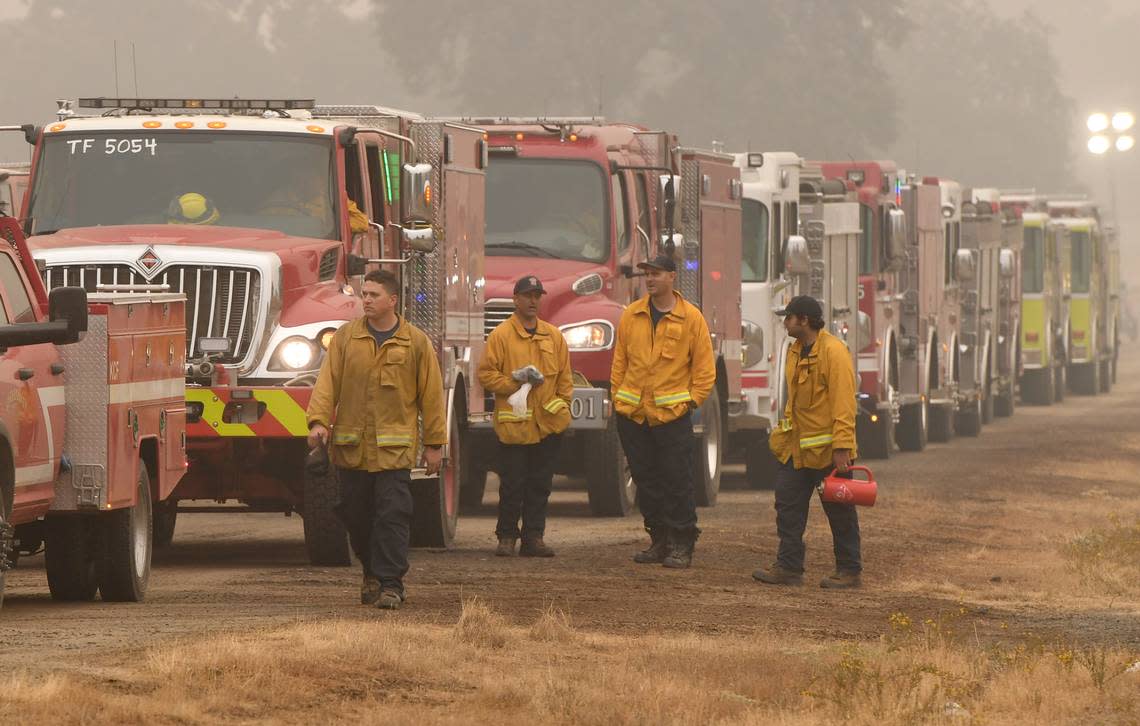