Detroit — The electric revolution disrupting an auto industry set in its ways for more than a century is pushing dealerships to make a choice: invest in the future or sit on the sidelines.

Take Cadillac: General Motors Co.’s leading electric brand told its 880 dealers to invest at least $200,000 each to sell future EVs starting in 2022 or get out of the business. Between 180 to 200 smaller volume dealers opted to take a buyout from GM, choosing not to take part in selling Cadillac’s all-electric lineup coming by 2030. 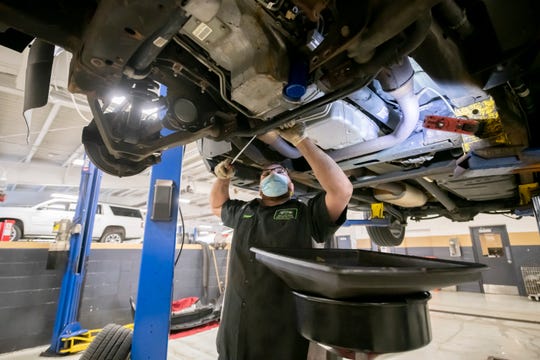 Ray Laethem Buick GMC in Detroit has signed on to sell the Hummer EV and has 22 orders. Its owner was “on board from the get-go” for future electric vehicles. (Photo: David Guralnick, The Detroit News)

Dealers mostly recognize that electric vehicles, which still make up less 2% of auto sales annually, are the future for many of the brands they sell. And there’s already a  push by governments for more electric vehicle sales, so investment is seen as a necessity for the long-term survival of legacy automakers and their sprawling networks of independent dealers.

GMC told dealers they didn’t have to transition to stay open. But if they want to sell the Hummer EV coming late this year, they must agree to invest in charging stations, training and tools needed to work on and sell electric vehicles. Of the brand’s 1,700 dealers, about 1,000 have signed up to sell the Hummer.

To sell Ford Motor Co.’s Mustang Mach-E, dealers have to be EV-certified with expanded charging abilities, increased service capabilities and more personnel training. Ford has 3,000 dealers and 2,100 have signed up for the certification.

“We look forward to selling electric vehicles,” National Automobile Dealer Association Chairman Rhett Ricart said. “Our customers, if they want to buy vehicles powered by Fred Flintstone, we’ll have those cars for ’em, too. We don’t really have an edict one way or the other on it.”

It is important for automakers to price EVs affordably, said Ricart, owner of Ricart Automotive Group in Columbus with Ford, Nissan, Mitsubishi, Hyundai and Kia dealerships. Incentives to buy “will be critical” for selling EVs, he added.

A tax credit program gives consumers $7,500 for being among the first to purchase electric vehicles, but the Trump administration let the program lapse. President-elect Joe Biden has said he would put more money into the program, a benefit to GM and Tesla Inc. since they already sold the maximum number of electric vehicles to qualify.

Dealers say it’s important that proposed investments to sell EVs be reasonable. And if the investment program is mandatory, a buyout program like what Cadillac offered is what’s “most appropriate,” Ricart said, noting that “absolutely … you’ll see some attrition” with the electric transition.

Dick Nourse, president of the Nourse Family of Dealerships in Marietta, Ohio, decided to take a $500,000 buyout from Cadillac at his Pioneer Chevrolet Cadillac dealership, where he sells three to five Cadillacs a month. The Chevrolet side of the dealership is still prosperous with an average of 40 to 50 sales each month.

Nourse purchased the dealership in 1974. He’s watched Cadillac sales shrink for the last five years. Sales volume has fallen 40% in that time, which he attributes in part to the changing demographics of the area.

“The Cadillac demise has probably been a change in the economics of the area,” he said. “The oil boom, kind of finished … and there wasn’t really any new business to offset it.” 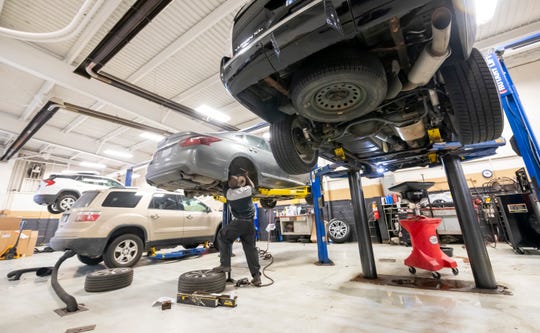 GMC told dealers they must agree to invest in charging stations, training and tools to work on and sell EVs. (Photo: David Guralnick, The Detroit News)

If he made $2,500 from every Cadillac he sold, it would take 80 sales to pay off the $200,000 investment for EVs. Instead, Nourse decided to save that $200,000 and take the $500,000 from the automaker and put it back into his company. Besides, Nourse doesn’t think many people in Marietta, a blue-collar town on the Ohio River, will be in line to purchase a luxury EV.

“It’s not that big of an investment. We spend a lot more money on image campaigns for the different franchises that we’re involved with. But the $200,000 plus the termination money that they threw onto the table, the combination of the two of them … being in rural Ohio it just made more sense than trying to trudge along with Cadillac wondering whether they got it right this time or not,” he said.

Experts saythe buyout option offeredby Cadillac was intendedto reduce the number of dealerships nationwide, which is far greater than its top foreign rivals. Toyota Motor Co.’s luxury Lexus brand, for example, has just over 240 U.S. dealerships. BMW Group has 349. After the buyouts, Cadillac still would have more than 600, but they sell fewer vehicles than their competition.

The brand has 6.5% market share and ranks No.7 among all luxury brands, according to the latest data from Edmunds.com Inc., a vehicle information website. Meanwhile, Lexus claims 13.7% of Cadillac’s home market and BMW 13.2%.

“If you got more dealers, but you’re selling substantially fewer vehicles than a competing brand, then you potentially have more dealers than you need, and you have some percentage of dealers who aren’t doing very well and don’t have a lot of incentive to work to invest in their own store — and to really pay that brand the kind of attention it might deserve,” said Karl Brauer, executive analyst for iseecars.com.

For some dealers, the decision to transition for EV sales is simple. But they understand why others with low sale volumes can’t justify the investment, especially if they are not confidentEVs will sell in their area.

Inder Dosanjh, a dealer with four Cadillac dealerships and two GMC dealerships in California, is budgeting $200,000 for each store’s electric investment. But California sells more EVs than any state — and the state is banning sales of gasoline-powered cars and trucks by 2035.

Dosanjh sells between 400 and 450 electric vehicles at the other dealerships he owns. Of that, about 350 are Chevrolet Bolts, he said: “We really live in a different world than the rest of the U.S.”

Ray Laethem Buick GMC in Detroit also has signed on to sell the Hummer EV and has 22 orders. Owner Jeff Laethem was “on board from the get-go” for electric vehicles — and for the iconic Hummer brand to make a comeback after GM benched it in 2010. 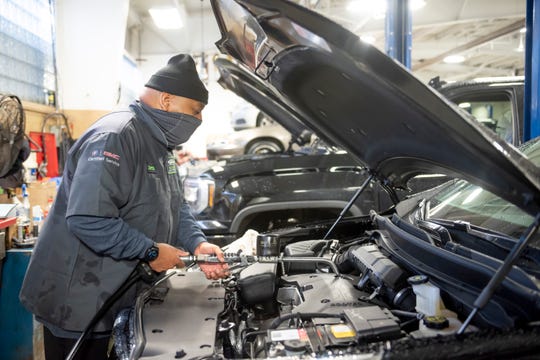 Darrick Norman works at Ray Laethem Buick GMC, where some infrastructure for electric vehicles is in place. (Photo: David Guralnick, The Detroit News)

The dealership expects the investment to be about $130,000, which is likely lower than what other dealerships will pay because Laethem already has some of the infrastructure in place to support the electric chargers required.

“The thing that it makes me want to do as a businessman is to expand the amount of dealerships that we have because I think that’s going to be the way to survive,” Laethem said.

The closest expensive investment to this that Laethem could think of was the $60,000 required to sell the Dodge Viper at his Chrysler Dodge Jeep Ram dealership in Detroit. But for that high-powered, low-volume sportscar, he thought the sales volume would be too meager to justify the investment.

The initial EV investment isn’t all dealers have to weigh. Electric vehicles require less maintenance, which means fewer trips to the dealership’s service department. And, as manufacturers contend, longer-lasting vehicles won’t need to be replaced as often as a gas-powered vehicles produced on traditional assembly lines.

“There’s significantly less opportunity for revenue after the sale,” Laethem said, “so that is going to be probably the biggest disruption.

“The biggest value add that we can be as a dealer is to be the experts in knowing all of the functionality and how it interacts with the consumer. More than ever, we’re going to have to be the subject matter experts, because so much of this from a technology side is going to be pretty new to our customers.”

GMC expects the Hummer EV to attract new customers, which could benefit dealers, said Duncan Aldred, vice president for global GMC: “It’s a very nice next step into what will be increasingly an EV future. But this should be one where it adds volume, it adds profit to their dealership, and it gives them an opportunity to grow their customer base and offer great customer service.”

GMC implemented a different dealer strategy than Cadillac’s because “our transformation to an EV brand is going to take a lot longer,” he said.

Ford started offering EV certification for dealers when it began to sell the 2012 battery-electric Focus. It reopened the certification process in 2019 and expanded the number of EV-certified dealers from 900 to 2,100. Another open enrollment phase is expected in the future.

“We wanted to have representation of our dealers with this product in every state in every market possible,” said Lisa Teed, Mustang Mach-E brand manager. “In order for dealers to participate, we had to make it pragmatic and reasonable.” 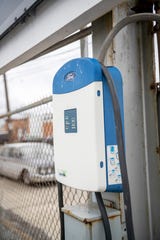 At the Reuters automotive summit in November, Ford CEO Jim Farley acknowledged that the transition will be difficult for dealerships that make much of their money on vehicle service work because it will be greatly reduced in the age of EVs and digitally connected vehicles with over-the-air software updates.

“It has a big impact for our dealers because the vehicles break less. They’re going to have less normal wear and tear, less warranty — and that’s good for the customers,” he said. “What do we do to backfill not just the manufacturing labor, but also what do we do for our dealers? There are a lot of consequences for the efficiency,” and the automaker is “starting to work through” some of those questions.

Others are more skeptical. Village Ford in Dearborn already had the two chargers in place, but the dealership agreed to pay about $25,000 for the Mach-E tool package. By comparison, dealer Jim Seavitt plans to spend about $40,000 to showcase the new Bronco when it arrives in summer 2021.

Seavitt doesn’t see an electric boom coming quickly, especially with gas below $2 a gallon in some places: “I think it’s coming, of course. I don’t think they’re gonna sell huge volumes of it.”

Hedge funds bet on recovery in 2021 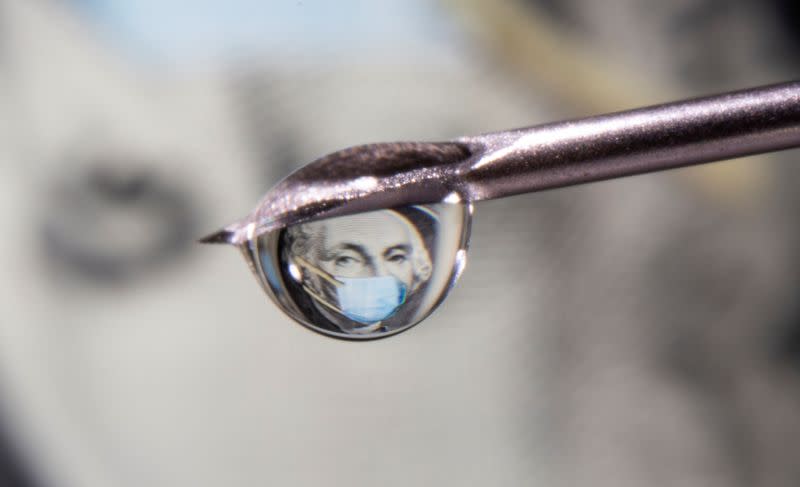