A female judge whose son was killed by an “anti-feminist” lawyer has called for protecting the privacy of federal judges in her first public comments.

“This monster knew where I lived…and had a complete dossier on me and my family,” she said.

Authorities believe he targeted Judge Salas over her role as a federal judge.

In an emotional video statement released on Monday, Judge Salas described the incident while urging lawmakers to help protect judges from future attacks.

“My family has experienced a pain that no one should ever have to endure,” she said.

“And I am here asking everyone to help me ensure that no one ever has to experience this kind of pain. We may not be able to stop something like this from happening again, but we can make it hard for those who target us to track us down.”

Hollander was found dead two hours north of the judge’s home. Police discovered names of several others he planned to target, including another judge, the New York Times reported.

The judge described how Den Hollander had allegedly opened fire with a FedEx package in hand, and how her son Daniel protected his father by taking the first bullet to the chest. Daniel had just celebrated his 20th birthday with the family that weekend.

She said her husband, Mark Anderl, was shot three times and is currently recovering in hospital from multiple surgeries.

Judge Salas noted the addresses and other personal information of federal judges is “readily available” online, while also calling out companies who sell such data.

“In my case, this monster knew where I lived and what church we attended and had a complete dossier on me and my family,” she said. “My son’s death cannot be in vain, which is why I am begging those in power to do something to help my brothers and sisters on the bench.”

Judge Salas is the first Hispanic woman to serve as a federal judge in New Jersey.

Daniel, who was the couple’s only son, would have returned to study at Catholic University of America in Washington this autumn.

What do we know about the attack?

On 19 July, the suspect – named later by the FBI as Den Hollander – disguised as a delivery man, arrived at the judge’s home.

Judge Salas and her son were in the basement at the time, but when the front doorbell rang, Daniel went upstairs to see who it was.

Den Hollander, 72, was reportedly upset with Judge Salas over her handling of a court case challenging the male-only military draft.

He was a self-described “anti-feminist” lawyer who had sued nightclubs over ladies’ night discounts, the federal government over a law protecting women from violence and a university over women’s studies courses.

In a memoir published online, Den Hollander said he had “wanted to ask the Judge out, but thought she might hold me in contempt”.

Den Hollander had written that he was diagnosed with melanoma cancer two years ago, saying “nothing in this life matters anymore”.

US media report that Den Hollander is also a suspect in a California murder case involving another lawyer.

Chop down the lynching tree from this California city's logo? Probably not so fast

Mon Aug 3 , 2020
“George” the mannequin hangs from a noose in downtown Placerville, a Gold Rush boomtown that prides itself on a history of “law and order.” (Erika D. Smith / Los Angeles Times) Mike Saunders talks about Placerville’s infamous “noose of justice” almost dispassionately. Even when, on one recent sweltering afternoon, he […] 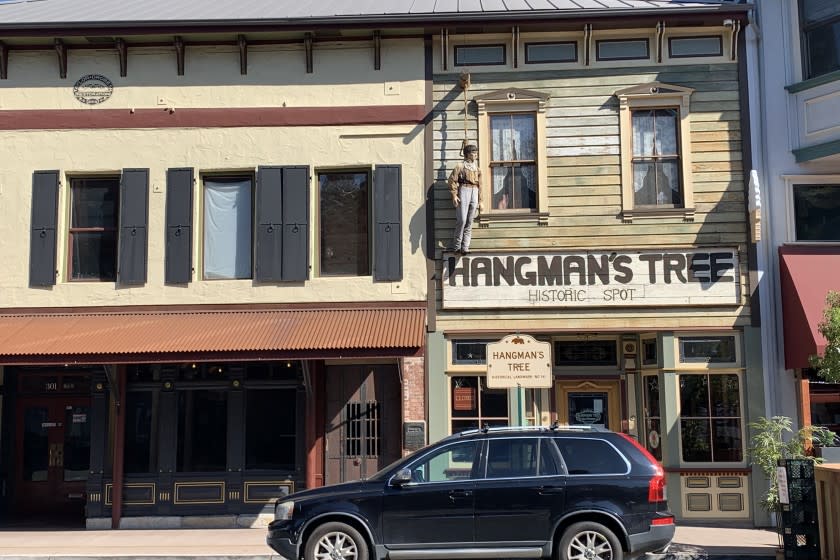