Even as some Charlotte-area business support the new statewide mask mandate as novel coronavirus cases spike in North Carolina, others worry that enforcement could be a problem.

When Gov. Roy Cooper extended Phase Two of the safer-at-home order on Wednesday for at least another three weeks, he mandated a statewide face mask rule to help stop the spread of COVID-19. Face coverings will be required for everyone when they are out in public effective at 5 p.m. Friday.

Enforcing the rule largely falls on businesses to have all employees and customers wear face coverings inside and follow six feet of social distancing.

Businesses can be cited for failing to enforce the requirement. If a person refuses to wear a face-covering inside a business or organization attempting to enforce the order, law enforcement can enforce trespassing laws, according to the order.

There are a few exceptions, such as medical, or behavioral conditions or disabilities, or for children younger than 11.

But Harris Teeter, one of the area’s largest grocery chains, has no intention of enforcing the mandate.

No customer will be barred from entry, even if they are not wearing a mask, spokeswoman Danna Robinson said. Matthews-based grocer Harris Teeter began requiring workers to wear them April 22, and encourages customers to wear them.

A manager will remind customers of the state order, and offer them a disposable mask, Robinson said.

“Everyone does need access to food and medicine, and Harris Teeter has been transparent with local and state-level government that we will not refuse entry or remove anyone not wearing a mask from our stores,” she said. “With the many exceptions outlined in the Executive Order, if we offer a shopper a mask and they decline, we are not in a position to determine whether the individual qualifies for the exceptions.”

Another grocery chain has taken a different approach.

Greensboro-based grocer The Fresh Market was one of the first retailers to begin requiring employees and customers to wear face coverings in mid-April at all 159 locations in 22 states, spokeswoman Meghan Flynn said Thursday.

“As a result of these policies, we have clearly seen a much greater degree of participation and believe it has improved the overall safety practices in our stores,” Flynn said. “In states or counties where there is an ordinance in place, we have seen much greater compliance.”

The store has not denied entrance to customers so far without masks because The Fresh Market does not want to place employees in “a confrontational situation,” Flynn said.

She said the stores rolled out other shopping options for people unable or unwilling to wear face coverings, such as shopping online for curbside pickup and Instacart delivery.

“If they do not have a mask or will not wear a mask, they cannot come inside,” Brewster said. “The mandate makes it easier. But even without it, we’ve been pretty adamant about this from the beginning.”

Brewster doesn’t expect problems getting people to comply. “I’ve been running this store for a very long time,” she said. “I think I can handle it without the police.”

Some customers have donned face shields. But Brewster requires everyone to wear a mask, even if worn under a face shield. She just hopes people will listen. “The science is there,” Brewster said.

No mask, no service

MK Sholesi, owner of nail salon The Good Polish, is concerned about the current spike in COVID-19 cases. She said she’s already been requiring customers to wear masks, and has them for sale.

“It’s probably a positive thing for the health and safety of business owners who have to remain open in order to pay their bills and keep the business doors open,” she said.

Mecklenburg County saw 281 new coronavirus cases Thursday, bringing the total to 9,614 since mid-March, according to state health officials. In total, 147 people have died locally, with 13 deaths this week reported by late Wednesday.

Over at Beatties Ford Road Hardware in west Charlotte, owner Orgire McCoy said she, too, favors the mask mandate because she knows coronavirus cases are rising. She said her customers should support the mandate, too, “if they want to stay alive.”

She doesn’t expect the new state rule to hurt business. If customers who don’t have masks come by, McCoy has masks that she’s selling for $1.50. If they can’t afford one, she will give them away for free.

Anyone who won’t or can’t wear a mask will be asked to wait outside and she will help get them what they need, McCoy added.

Coronavirus in Charlotte: Are people wearing masks in stores? We went to 75 to find out

Shante Williams, chairwoman of the board for the Charlotte-Mecklenburg Black Chamber of Commerce, said she’s heard mostly positive feedback about the mandate from her members.

“A lot of Black business owners think it’s the right step,” she said. “They’re thinking more about the community when they’re saying, ‘I know this is the right thing to do if it’s going to help slow the spread of the virus.’ ”

However, she’s also heard concerns from the Black community about how the mandate will be enforced. “(We’re) hoping that people don’t end up with fines or being pushed into the criminal justice system because of the enforcement,” she said.

“Some people were wearing masks and then they saw everybody else not wearing masks,” Williams said, “and they actually felt out of place. So this may encourage those folks who were a bit skittish beforehand to come out.”

“The business community embraces its role to be on the front lines of incentivizing and educating people about why masks are important, but nobody asked for a badge,” he said. “So the concern is how it actually works?”

He said there are too many questions: What does it mean to enforce it? Do I tell you one time? Do I need to ask you to leave?

“We think the mandate could be more effective and could have been avoided if there were more education,” Starling said.

Sean Richardson owns Universal Cuts barbershop in north Charlotte. Since reopening last month, he said, some people have not observed his policy for customers awaiting service to wear face coverings.

Richardson said that made others uncomfortable, and he had to ask people to wait outside.

He approves of the mandate. “Business owners are suffering but at the end of the day, you definitely want people to be safe. With the state doing it, I feel like I can better enforce it,” Richardson said.

“Relieved is an understatement,” she said. “I think this is what we need.”

Hernandez reopened her NoDa shop last month, and required all customers to wear a mask.

Pura Vida has posted face mask requirements and has disposable ones available. Employees are stationed at the door to make sure people are aware of the policy.

In Northlake Mall, authorities will ask shoppers in public areas to comply with the mandate. Individual stores and restaurants also will be required to enforce the mask order.

“Throughout the public spaces in the mall, our teams will monitor as much as possible. We’ll share the governor’s mandates with a visitor who may not have a mask or isn’t wearing one, and ask that they follow the state’s requirement,” said mall spokesman Adam Kamlet.

Police will not be called to enforce the rule, he said. Most shoppers already have their own face covering, Kamlet said, and the mall will have masks available if someone needs one.

At Carolina Place Mall, signage will detail the new requirement at all entry doors.

Mall security will have free masks available upon request and will be monitoring mall traffic to ensure that the appropriate health and safety measures are being taken, spokeswoman Rachel Wille said.

Mary Jayne Wilson is executive chef and director of operations of Amelie’s French Bakery and Cafe, which has several Charlotte locations. The bakery has already been struggling to get customers to wear masks, Wilson said, and has met some resistance to that request.

“It has been a bit of a challenge,” she said.

Amelie’s provides free masks to anyone who comes into the bakery, which is open for takeout only.

Amelie’s also won’t call the cops to enforce the mandate, Wilson said. She said the bakery has had several Charlotte-Mecklenburg police officers stop in as customers, and when they were asked to put on a mask, they declined.

Wilson said she doesn’t know if the mandate will have an effect on business, but hopes it impacts the spread of the virus.

“Seeing some other states, and they’re mandating masks, and seeing their counts go down, is promising and gives us some hope,” she said.

What does NC’s face mask order mean? How will it be enforced? Answers to questions.

‘No masks. No vaccines.’ Battle is brewing over coronavirus immunizations in California

Fri Jun 26 , 2020
They’ve resisted the stay-at-home order, denounced contact tracing as government control and disregarded a statewide mask mandate. At every stage of the pandemic, California’s anti-vaccine activists have foreshadowed what their fight against a future vaccine to prevent COVID-19 could look like. “If we can’t win the mandatory mask argument, we […] 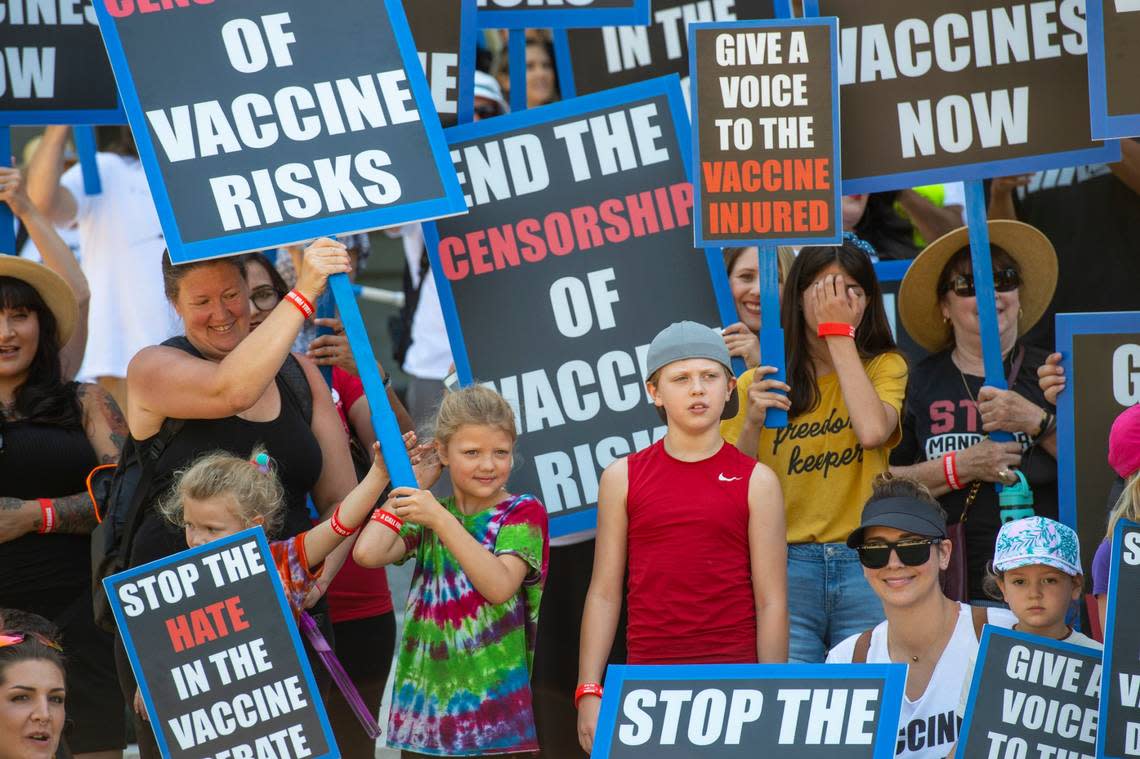