Genna Batson, who graduated last month from Syracuse University’s Bandier Program with a music business degree, was about as poised for a career in the concert industry as a senior without a nepotistic benefactor could be. She’d focused on the touring business early in her college days, serving as talent buyer and co-director of the school’s concert board, and held internships at industry titans Live Nation, Red Light Management and Superfly, where last summer she interned as a sponsorship coordinator for the Outside Lands festival in San Francisco. She’d secured a contracted position for this summer in the same role, and a permanent job looked promising.

But then came the pandemic, which in a matter of days flattened the entire concert industry — the financial engine of the music business, which touring trade Pollstar had projected would generate $12.2 billion in box office this year. Every major concert tour and festival has been canceled or postponed indefinitely; layoffs, furloughs or pay cuts have hit every major live-entertainment company. Pollstar has since estimated the concert industry could lose as much as $9 billion in 2020 alone. Needless to say, there’s a hiring freeze in much of the music business, and a near-universal one in live entertainment.

“I’m holding out hope that the live industry will come back,” Batson, 21, who graduated with a 3.7 average and minors in marketing and music history, says from her parents’ home in New Jersey. “But now it’s about being flexible and adaptable, and I’m looking at different sectors like record labels and publishing. But I have enough education to feel comfortable taking risks and I feel very supported by the Bandier Program — they send out job leads every week.”

Thirty years ago, one would have been hard-pressed to find even a handful of colleges offering classes about the music business; now dozens of universities host full-scale programs, with graduate and undergraduate degrees. Some, like Syracuse and Berklee in Boston, grew out of formal music schools, but others across the country range from the long-running program at Nashville’s Belmont University to Drexel in Philadelphia and Loyola in New Orleans; there are several in Southern California and two at New York University alone, including the Clive Davis Institute for Recorded Music. With plum internship placement and industry veterans like Epic Records Chairman/CEO Sylvia Rhone and Justin Bieber/Ariana Grande manager Scooter Braun (pictured above at a Syracuse Zoom class) as guest lecturers, these programs provide students with the kind of experience that previously took many years to accrue, and the number of graduates they release into the wild each year ranges from Syracuse’s intentionally small 25-30 to a more common total of 100-200 at other major schools. (Disclosure: The writer of this article has been a guest speaker at Syracuse and NYU programs.)

Like most colleges, during the 2020 spring semester the programs had just days to figure out not only how to teach online but how to prepare their graduating seniors for the daunting job market they were about to enter.

“I’ve been reading a book about Winston Churchill during the Battle of Britain, and I think there’s something about his realistic but hopeful leadership that we all can take a page from,” says Larry Miller, director of the music business program at NYU’s Steinhardt School, with a rueful laugh. “We had [WME head of music] Marc Geiger speak to our graduates at our virtual commencement, and he said amazing things about not giving up on your dreams, even with the world as it is right now.”

While many programs help graduates to make connections and find job leads, Belmont has doubled down on the process. “We’re not a placement agency,” says Nina Williams Woodard, senior career development specialist at the university’s Mike Curb College of Entertainment & Music Business, “but we have many programs to help graduates as well as alums who may have lost their jobs.” She lists a dizzying series of workshops, seminars, coaching sessions, career-development programs (including one on “How to Job Search in a Pandemic”) and even an eight-week mentorship program this summer that connects more than 100 students and 2020 grads with industry professionals. “We try to make sure that graduates focus on what is in their control, and think about what this makes possible rather than what’s been harmed,” she says. “Now is a good time to research and build skills for when the market does open up.”

Some schools have used the pandemic as an extreme example of the kinds of challenges one faces in the music industry, which emerged from a decade of illegal-downloading-induced financial devastation just a few years before coronavirus hit. “The music business is a wildly competitive place — even in good times, there are 300 resumes that you have to distinguish yourself from,” says Bill Werde, director of Syracuse’s Bandier Program. “We always stress resiliency, resourcefulness, the fluid nature of trends and the dynamic nature of business models, and Covid-19 has sharpened the focus of those conversations, to put it mildly. So we say, ‘Do you passively wait for a job to come to you, or do you research your favorite companies and the executives you need to create relationships with, and go to them — and why even wait for a job posting?’ We try to set people up for careers.”

A similar entrepreneurial approach is advocated by Berklee’s Tonya Butler, who becomes chair of the school’s music business/management department next month. While her program is limited to music students, it focuses on ways that musicians can best run their own businesses, with emphasis on marketing, branding, imaging and developing a fan base. Just days after the pandemic set in, Berklee professor Jeff Dorenfeld had moved one of the school’s concert programs to livestreams, complete with virtual tip jars and other ways to monetize. “We’re trying to get musicians to see themselves as a business,” Butler says. While the current industry climate is arguably toughest of all on musicians, many of whose entire sources of income have dried up, “We try to make the students understand that they’re not alone and not to take it personally,” she says. “We work to set them up to change with the times, and the curriculum is fluid enough to adapt — I always say, ‘What I tell you today could be different in a few months.’”

Lindsey Ferguson, 24, got her master’s from Steinhardt in May and is working part-time at the music publishing rights platform Songtrust — remotely, from her parents’ home in rural Pennsylvania — and is also a singer-songwriter. “I’d fully expected to stay in New York and work in the industry,” she says, “but being at home in the quarantine, I felt a peace I’d been missing and it’s given me time to think.” Some songwriter friends relocated to Los Angeles, and she started making connections and collaborating remotely with other musicians. “I’ve seen a lot of resourcefulness and innovation from my peers — even if they can’t find a job and we’re not in class or internships, they’re finding ways to come up with work,” she says. “They’re creating songs or videos and making connections — and I’m seeing a lot of activism too, for Black Lives Matter and LGBTQ [causes]. We’re using the time to be still, but there’s a lot of internal creative movement in our stillness.”

Another Steinhardt graduate considering his options is Matt Rose, 22, who until March had hoped that a successful internship at Paradigm Talent Agency might lead to a position at the company or elsewhere in live entertainment. “I really wanted to work at an agency, but now I’m looking for anything in music, film/TV or both,” he says. He’s been interning at Manhattan Theatre Club from his parents’ home in Philadelphia and working on friends’ endeavors, including a podcast, and music supervision and freelance songwriting for theater projects. “It would be easy to say that I wish the school would do more” to help with his job search, he says, “but NYU prepared us really well and gave us a comprehensive set of skills, so I really can’t complain.”

Indeed, the career pivot, and the psychological preparation for one, is a survival skill that most programs emphasize. “If a student honed their focus on the live industry or agencies, we say, ‘Why don’t you look at management?’ and reassure them that just because they’re not getting into the live business right now doesn’t mean they never will,” Werde says. “‘Get your foot in the door, learn how to be a competent professional, build your knowledge and relationships, and it’ll work out.’ I think people put too much emphasis on the career path being a straight line, and we all know that’s not usually how it goes. For the students, the events of this year are certainly disappointing, but we’re counseling them to take a longer view, and I’m not overly concerned” about graduates’ prospects.

That optimism is echoed by Miller. “Our students come from all different backgrounds, but many have very involved or even helicopter parents — and if those students weren’t resilient before, they are certainly becoming that way now. I’m seeing it happen before my eyes… my virtual eyes,” he laughs. “The way they speak about their situations gives me confidence that they’re going to get through this.”

In fact, Batson and the Syracuse concert board were making lemonade out of lemons even before they graduated. The university traditionally holds “Block Party” concerts on campus at the beginning and end of every school year, but obviously spring 2020’s was canceled. To replace it, Batson and the team booked an online concert over Zoom, with a virtual acoustic set from singer King Princess (who played from Hawaii via iPhone) and a DJ set from Kaytranada, whose livestream set-up was not compatible with Zoom. After several hours of working out knotty technical hurdles, the students and Kaytranada’s Toronto-based crew found a workaround by livestreaming the set onto Twitch, and then livestreaming that livestream over Zoom.

“It was all uncharted territory,” Batson enthuses, “and it was really exciting to figure it out.”

Wed Jun 24 , 2020
Eric Rosengren, president of the Federal Reserve Bank of Boston, spoke with Yahoo Finance on June 22 to discuss the Fed’s unprecedented actions taken in the past few months and what lies ahead for the U.S. economy. Below is a transcript of his appearance: BRIAN CHEUNG: Thanks Julie, well we […] 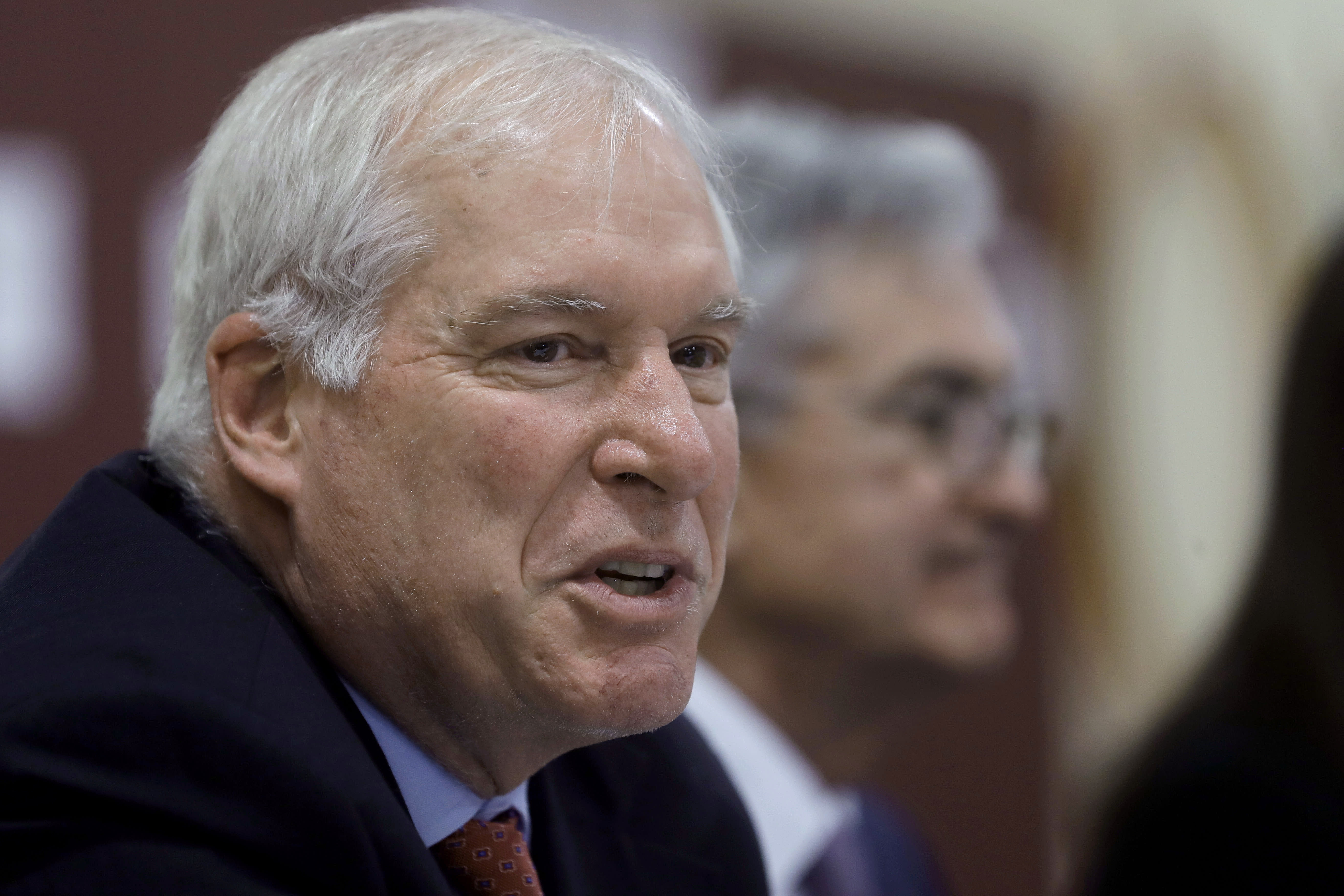