The Latest on the effects of the coronavirus outbreak on sports around the world:

Brooklyn Nets guard Spencer Dinwiddie says he has tested positive for the coronavirus.

Dinwiddie told The Athletic he is experiencing symptoms and it is unclear if he can play when the NBA season resumes.

His absence would be a significant blow to the Nets. He has played well this season with Kyrie Irving out of the lineup because of injuries.

Dinwiddie says he tested negative for the virus multiple times after returning to New York and took part in a couple practices. But he has since tested positive and says he has a fever and chest soreness.

He is at least the fifth Nets player to test positive. The previous four were in March, with Kevin Durant saying he was among them.

Dinwiddie is averaging 20.6 points for the Nets, who have a half-game lead over Orlando for seventh place in the Eastern Conference. They are set to face the Magic on July 31 in their first game back.

Dan Hughes will not coach the Seattle Storm during the 2020 WNBA season over concerns about his risk for severe illness if he were to test positive for COVID-19.

The decision was made following a medical assessment by the league and in consultation with Hughes’ primary care physician. The WNBA is set to begin its season in late July with all teams playing in Florida.

Hughes, 65, had surgery last year to remove a cancerous tumor from his digestive tract. He missed nine games while recovering from the surgery.

Seattle promoted Gary Kloppenburg to head coach for the season. Kloppenburg served as the interim coach last season while Hughes was recovering from surgery.

Van Wagenen did not identify any of the players on a video call with reporters, nor did he detail their conditions or reveal when they tested positive. He says the club is optimistic the player on the 40-man roster will be able to return to action early in training camp, which begins Friday at Citi Field.

”He is recovering and we feel like he’s in a good position, but we’ll sort of wait and see once we get everybody here in camp,” Van Wagenen said.

The GM said none of the positive tests occurred at the club’s regular spring training complex in Port St. Lucie, Florida.

The Chicago Bears are offering full refunds to season ticket holders because of the COVID-19 pandemic.

Season ticket holders who choose that option will be able to renew their seats for the 2021 season, the team says. The Bears are not sure how many fans will be allowed at Soldier Field this season.

Chicago is scheduled to open at Detroit on Sept. 13 and host the New York Giants a week later. The Bears also have home preseason games against Cleveland and San Francisco on Aug. 15 and 29.

Hoyer would not reveal their names. He says one was tested because ”a friend of a friend had it and he’d been in contact with that person,” and the other was ”out of an abundance of caution.”

Hoyer says no players have tested positive or opted out of this season because of concerns about the coronavirus, nor have any coaches.

The New York Jets are offering fans refunds or payment deferrals on season tickets this year because of the coronavirus pandemic.

The team began emailing season ticket holders Monday to alert them about their options. The Jets also are deferring season ticket payments for July, as they have done each of the last three months.

Also, season ticket holders with personal seat licenses who opt for the deferred payment or refund on tickets will also be able to defer their PSL payment, which is due in November to November 2021.

The team says those fans who make automatic payments on their season tickets will continue to have their payments made unless they opt for the deferral.

The Jets have not made individual game tickets available as they continue to monitor the situation regarding government restrictions and regulations during the pandemic. NFL teams are scheduled to report for training camp on July 28.

Austin Peay has suspended voluntary workouts and closed its facilities after a cluster of positive tests for the coronavirus among its athletes.

The Governors currently have 11 athletes who have tested positive. The FCS-level school in Clarksville, Tennessee, did not identify the sports involved.

Austin Peay closed its facilities Saturday. Athletic director Gerald Harrison said in a statement Monday that the positive tests are regrettable but procedures put in place worked as expected. That includes isolating those who tested positive along with people at risk through contract tracing in self-quarantine.

Austin Peay also is cleaning and disinfecting its facilities.

The Carolina Hurricanes will help deliver meals to local healthcare workers to thank them for their work amid the coronavirus pandemic.

The team announced a five-week program Monday to deliver 1,000 meals in partnership with Blue Cross and Blue Shield of North Carolina. It begins Wednesday when Hurricanes coach Rod Brind’Amour assists with the first delivery, this one to the UNC Health Wakebrook behavioral health campus in Raleigh.

More meals will be delivered each Wednesday through July.

Zaidi says Bishop got his test result on Friday and has mild symptoms.

Bishop would have been on the club’s roster of 51 players announced Monday for the start of camp later this week. Zaidi says Bishop is in Arizona and wasn’t around any others from the organization.

The 22-year-old Bishop is the team’s first-round draft pick from 2019, selected 10th overall out of Arizona State. The Giants are planning their first workout Friday.

Miami Marlins president of baseball operations Michael Hill says a player who was asymptomatic has tested positive for the coronavirus.

Hill didn’t identify the player, but said he ”feels great” and will go through MLB protocol to join the team.

Hill said he would be surprised if any Marlins players opt of the season because of health concerns.

General manager Mike Rizzo said Zimmerman and Ross opted out ”for the personal health and safety of themselves and their loved ones,” adding the team supports their decisions.

Zimmerman said in a statement his family situation factored into his decision. His mother is at high risk for complications from the coronavirus because she has multiple sclerosis, and he has three young children, including a newborn. He told The Associated Press last week he was still undecided on whether to play.

As part of his announcement, the 35-year-old Zimmerman said he’s not retiring.

Ross is a 27-year-old right-hander with five years of major league experience, all with Washington.

Harris English is the fifth PGA Tour player to test positive for the coronavirus.

The positive test for English was part of the pre-tournament screening process at the Rocket Mortgage Classic in Detroit. English did not play last week at the Travelers Championship in Cromwell, Connecticut.

English says in a statement he feels healthy and supports the tour’s additional policy of not letting anyone at Detroit Golf Club until the test results were back.

Previously, a player could practice but not enter the clubhouse while waiting on the results.

English started the season with limited status and has risen to No. 27 in the FedEx Cup. He must self-isolate for 10 days, meaning he will miss the next two tournaments.

The National Hockey League says a total of 26 players have reported testing positive for the new coronavirus since voluntary workouts began June 8.

Monday’s update includes four additional cases among those tested at team facilities, to go along with the 11 announced June 19. The league says it’s aware of 11 other players testing positive outside the voluntary workout protocol.

The NHL said more than 250 players who worked out at team facilities were administered more than 1,450 COVID-19 tests.

The league and players are in the final stages of agreeing to resume the season. Training camps can open as early as July 10 if an agreement on testing, health and safety protocols and ”hub” cities to host the games can be reached.

NBA All-Stars Kemba Walker and Trae Young, and U.S. women’s Olympians Sue Bird and Breanna Stewart will be coaches for an online basketball camp set up in response to coronavirus restrictions.

The camp for children of all ages was launched by former NBA player and longtime TNT basketball studio analyst Kenny Smith.

The camps begin July 20 at www.jetacademycamp.com and can be streamed on any device. Schedule details and pricing are available on the website.

Smith has run a camp for 25 years in North Carolina, where he played collegiately. But camps have been limited or canceled in many locations because of rules limiting sizes of gatherings because of the virus.

NASCAR may be racing during the coronavirus pandemic. Celebrating in early December now is off the schedule.

The motorsports series has canceled its Champion’s Week and Cup Series awards scheduled for early December in Nashville, citing the uncertainty from the coronavirus pandemic and its impact on the industry. NASCAR moved Champion’s Week to Nashville in 2019 from Las Vegas.

NASCAR still plans to celebrate its champions from the Xfinity Series to the truck series and promises details to come. And NASCAR says the series looks forward to returning to Nashville in 2021.

Millennials had barely recovered from the Great Recession. Then came the pandemic.

Tue Jun 30 , 2020
A generation of young adults who came of age during the Great Recession — in what was then the worst economy and job market since the Depression — are now finding that their wobbly recession-era start is compounding the financial woes the pandemic is inflicting. Credit counselors say there has […] 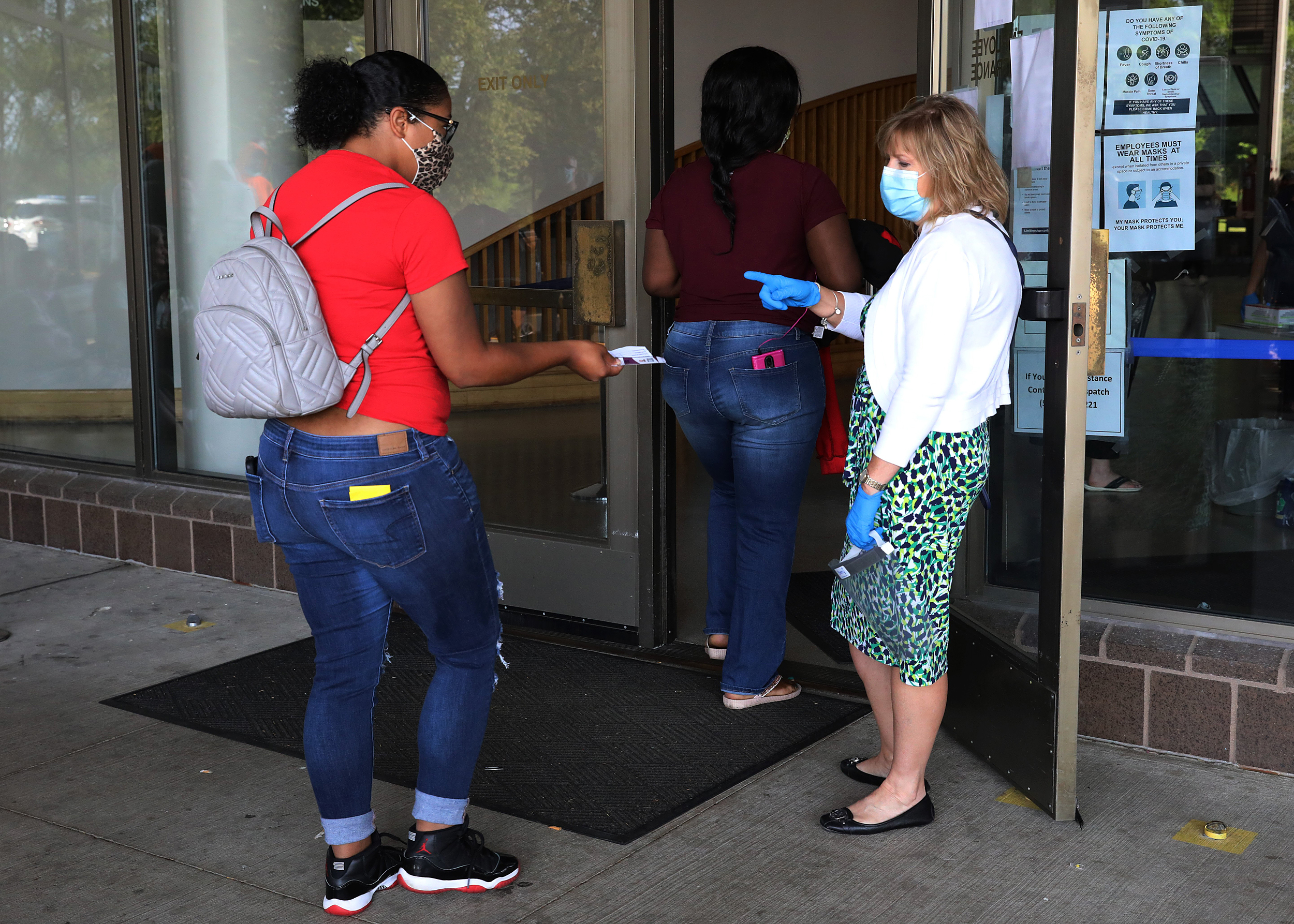