This article is part of the The DC Brief, TIME’s politics newsletter. Sign up here to get stories like this sent to your inbox every weekday.

Sure, the day lacks the symbolism of the Fourth of July, the adrenaline of Labor Day’s starting-pistol crack or even the familiarity of Arbor Day. But the fourth Tuesday of September is its own sort of quasi-holiday for political insiders. It represents a coast-to-coast, bipartisan and in-the-weeds deadline of sorts to get Americans off the sidelines and prepared to participate in the fall’s elections, scheduled for Nov. 3 — or before, if you live in one of the seven states that’s already conducting early-vote programs. It’s one of the final days when every American still has a chance to join the voter rolls in time for their voices to be heard. Doors start closing for good on Oct. 4.

Don’t think voter participation is a problem? In 2018’s midterm elections, the average voting rate by congressional district was almost 48%, according to Census data released in February of this year. Though it was a record high level of participation for a midterm since 1966, when 49% voted, more than half of Americans sat the elections out. Presidential years don’t bring much more excitement, either; according to a Pew analysis of the 2016 race, roughly 4-in-10 eligible voters stayed home.

Some of the reasons for America’s low voter turnout, compared to fellow democracies’ most recent national elections, are the systemic and structural barriers. In Belgium’s 2014 election, 87% of eligible voters cast ballots. In South Korea in 2017, the rate was 78%. In Mexico in 2012, the rate was 66%. Since U.S. elections are a series of state- and territory-based operations more than any one federal effort, the result is a patchwork of provincial rules that voters — and the national advocacy groups looking to mobilize them — have to navigate.

Enter the nonpartisan, vote.org, Silicon Valley’s accidental penance for social media’s destructive role in U.S. democracy that grew out of a group founded in 2008 as Long Distance Voter. Vote.org, funded by Silicon Valley start-up fund Y Combinator and overseen by an independent board of techies, has made its online platform for all states’ voter registration systems, registration checks and requests for ballots seamless for individual Americans and for advocacy groups that want to boost participation rates but don’t necessarily have the tech firepower to build the tools. The systems also allow groups to follow-up with new voters to make sure they know their polling places, voting times and actually showed up. Since 2016, vote.org has added 8 million new voters to the electorate.

This year, we could be bracing for a once-in-a-century turnout, according to Brookings’ analysis.And that was before a Supreme Court vacancy emerged as a motivating force. So far this year, more than 2.1 million new voters have registered through vote.org’s portals. More than 2.4 million voters have requested mail-in ballots from their states through vote.org, up 18-times the level the group saw in 2018. Another 5 million voters have confirmed their registrations, putting it on pace to be a check-point for 21 million Americans. Upon news of Supreme Court Justice Ruth Bader Ginsburg’s unexpected death, the site went into overdrive: 140,000 people checked their voter registration, 40,000 newcomers registered to vote, and 35,000 mail-in ballots were requested on Saturday and Sunday alone.

On Friday, before we knew of Justice Ginsburg’s death, I caught up with vote.org’s relatively new CEO Andrea Hailey. Below is a lightly edited and condensed version of our chat.

PE: The registration numbers this year are pretty eye-popping. What is going on?

We started noticing our numbers on our site going up exponentially all the way back as far as January, which is unusual. Usually people pay attention to elections a little bit closer in. This year we’ve just seen outsized engagement, outsized interest, much over anything we’ve seen before at vote.org. My engineers started talking to me about it on Super Tuesday, when we had a million people alone come through the site. This year people are definitely motivated, interested, paying attention to this election, paying attention to registration deadlines.

When COVID hit in March, I thought we were going to have to do a lot of education pieces around absentee requests. We saw an immediate jump on our absentee request tool, which started even outpacing the registration tool.

I think that the other thing that we’ve really noticed is that there’s definitely a connection between the protests and increased engagement. So, the first week of a protest after George Floyd’s murder, we had 293,000 people register. That trend has just continued. We are seeing the engagements and the resilience of the American voter. I mean, our demographic does tend to be younger. If anything, it tells me that there’s like a younger generation that’s fired up and ready to participate.

PE: How much of this is organic to people wanting to get involved in the process and how much of it is, for instance, civil rights groups mobilizing folks and getting them in the system?

To be completely frank with you, we’re seeing a lot of organic engagement. I think our partner orgs are also seeing increases. A lot of people had to pivot in March from in-person programs to digital programs. That’s caused a little bit of chaos in how we typically organize. While I’ve seen a lot of our partner orgs do very well, with the kind of volume that we’re seeing right now is like on the site at any given day it’s up between like seven-hundred and a thousand percent over anything we’ve ever seen before. A lot of that is driven by organic interest and new voters registering.

PE: Registering to vote is one thing. Actually being able to cast your vote is another. Is there any reason to expect that these people who take the time to register to vote will actually be able to do so?

When you come to the site and you register, people can opt into text-message reminders and emails. And so we send a whole bunch of get-out-the-vote messages around early voting and then pushing people to vote. We try to do everything we can in our power to make sure that we’re lifting barriers and that people are actually able to participate and able to vote. That takes a lot of different forms.

PE: Why does voting matter?

Voting is the way that we have a voice in our democracy and it’s how we can hold leaders accountable or show our support. Voting matters because your voice and your community matters. Community is being run by a series of laws and policies and you want to be one of the people who can help decide who sets those priorities. If you’re focused-in on what’s happening in your education system, and you have to look at school boards.

Most people don’t realize that a lot of local elections come down to just a handful of votes. That can really make the difference. This year, yes, we have the presidential and everyone’s paying close attention to that. But we also have a ton of statewide and local races at the same time and that are really important to make sure that you can have your voice heard. Because without your vote, without your voice, you’re still going to get leadership. You’re just not going to have input into it.

PE: How are you feeling about the election?

Every day, we’re seeing at vote.org that people are excited and resilient and fired up. We’re seeing a huge amount of momentum and engagement around elections. We could be in a position to see a lot of new voters, a lot of young voters show up. I feel better than in 2016, when a hundred million people didn’t participate at all in the election. I feel that we are primed to have higher turnout this year, which is really good. If we can get a new voter participating and we can get them back into a subsequent election, that after two elections, voting becomes a habit and you’re likely to have created a new lifelong voter. So I think this is a huge opportunity to kind of on-ramp the next generation of voters.

PE: What can go wrong on election night?

PE: Scare me a bit here.

The biggest thing is that we have a national poll worker shortage this year. So keeping in-person locations open is a concern, making sure that everybody has the opportunity to vote in person if they want to is a concern. So seeing polling locations closed because they can’t be staffed, stuff like that with me — that would be a worst-case scenario. Obviously, the slowdowns in the United States Postal Service are not ideal and could cause delays and issues with mail. You’re seeing a lot of states react to that, though.

I think someone declaring [victory] — or they’re having anybody in the media declare — before every vote counted, that that would be concerning on election night. It’s just really important that the officials in the states are able to go ahead and work through the process that they’ve put in place. If we go through an election night where everybody’s still counting the tallies, that would be a good sign.

I’m trying to think of the positives, but there’s no shortage of terrifying scenarios for election night.

PE: How confident are you as an individual that the vote tally is going to be accurate?

I’m confident. I’m seeing a lot of states are scaling and addressing these issues. I’m confident about accuracy. People have to realize, though, that it may take a while. We’re seeing a huge increase in engagement and vote by mail. People may not know by 9 o’clock or 11 o’clock on election night what the results are. I think the most important thing is that every vote gets counted. That might take a little time to do that. But I do believe that the elections officials are working so diligently right now to make sure that all the processes are in place. We know what it takes to administer an election and to count votes. It’s not fully like rocket science. It’s just that it does take manpower. It does take dedication and it will take a little bit of time.

Make sense of what matters in Washington. Sign up for the daily D.C. Brief newsletter.

Happy first day of fall, such as it is

Tue Sep 22 , 2020
Autumnal Equinox marks the first day of fall, wonderful holidays Editor’s Note: This is a preview of USA TODAY’s newsletter Staying Apart, Together, a guide to help us all cope with a world changed by coronavirus. If you would like it in your inbox on Tuesdays and Saturdays, subscribe here.  Happy leaf peeping and sweater […] 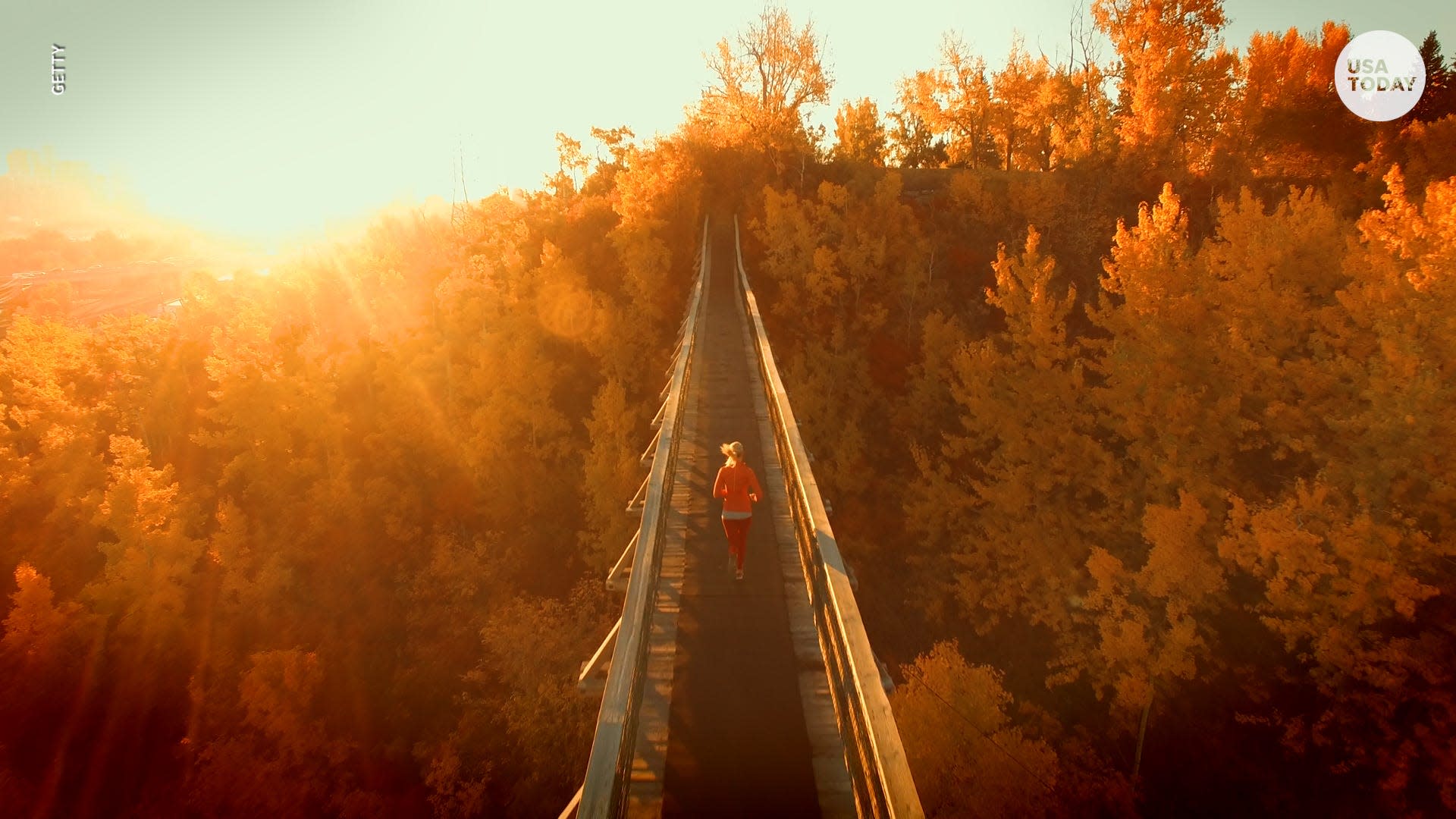