Good morning and happy Tuesday to you!

A Central Valley Republican lawmaker hasn’t asked for the same pay cut California state workers are taking despite saying on social media that a request had been made on his behalf.

Assemblyman Devon Mathis of Visalia made the claim after someone identifying herself as a union leader responded to a Labor Day post on his Facebook page asking if he would “stand in solidarity with laborers” and request the 9.23% reduction that was imposed on state workers in July.

“As you probably already know the Republican Caucus asked for the same reductions,” Mathis replied on Sept. 14.

By Sept. 21, the State Controller’s Office, which administers the reductions for state officials, hadn’t received a request from Assembly Republicans, according to the office. The party holds 17 seats in the 80-member chamber.

The Legislature approved the cuts, which are equivalent to what state workers make in two days of work per month, as part of the state’s budget response to economic fallout from the coronavirus outbreak.

In general, workers through agreements negotiated by their unions receive two flexible days off per month in exchange for the reductions. Their retirement health care contributions are also suspended, making the hit to their take-home pay smaller than 9.23%.

Gov. Gavin Newsom, who first proposed the pay cuts in May, requested a retroactive reduction to his own pay in August. His request came after The Sacramento Bee reported that he had not taken the pay cut at the same time as state workers, despite saying that he would participate. Newsom’s office said the reduction was delayed due to an administrative oversight.

Justin Turner, Mathis’ chief of staff, said Monday that the assemblyman had been confused. During initial discussions around state worker pay cuts this spring, when straight furloughs without compensatory time off were proposed, members of the Republican caucus were preparing to publish a letter saying they should reduce their own pay before state workers’ pay, Turner said.

As the situation developed and the state shifted to the personal leave program that was used instead of traditional furloughs, the letter was not sent, Turner said.

Read more here on who is — and isn’t — taking the pay cuts in today’s story by Wes Venteicher.

Less than a month after the Legislature approved a handful of police accountability bills but failed to pass a measure to decertify officers with a problematic history, Assembly Speaker Anthony Rendon, D-Lakewood, announced on Monday a new coalition to continue work on the effort.

The Select Committee on Police Reform will be tasked with providing a “public forum to discuss measures to keep our communities safe and continue California’s leadership in police reform,” Rendon’s press release included.

“While California has made significant strides in police reform, there’s still much work to do ensuring equality and justice,” Rendon said in a statement. “The Assembly is committed to building on this progress by working with our communities and creating a more transparent process for reforms.”

The committee is expected to build on the Legislature’s passage of bills that would ban chokeholds, establish sheriff oversight boards, invest money in community crisis organizations and make it harder to hire officers with investigations into misconduct on their records.

Senate President Pro Tem Toni Atkins, D-San Diego, and Sen. Steven Bradford, D-Gardena, also pledged earlier this month to continue work on Senate Bill 731, which stalled in the Assembly but would have yanked certification from officers “guilty of misconduct.”

“This year’s constitutional deadline for the bill has passed, but the Senate’s commitment to improving public safety and protecting our communities, particularly communities of color who face such disproportionate impact, remains strong,” a joint statement from the two legislators said.

Atkins said her house has no plans to create a separate select committee, but is confident that issues around police reform can be appropriately handled in the Senate Committee on Public Safety.

The Yes on Prop 16 campaign is calling for the group opposing the affirmative action ballot measure to issue an apology, after a person associated with the group made online remarks about the late U.S. Supreme Court Justice Ruth Bader Ginsburg.

Kali Fontanilla, a public school teacher featured on the website for Californians for Equal Rights, an anti-Prop 16 group, took to Facebook after Bader Ginsburg’s death to write, “While I have paid my respect (sic), I will not be crying for RBG! Save those tears for the babies being thrown away as hazardous waste!”

In a follow-up post, Fontanilla, one of the signers of the rebuttal against Prop 16, referred to the late Supreme Court justice as “a wicked woman” and that people “probably won’t see RBG in heaven (sic).”

Fontanilla is featured in a No on Prop 16 advertisement as a “Latino/Black student who went to (University of California) by merit only.”

“Justice Ruth Bader Ginsburg was a trailblazer for women’s rights and a champion of justice and equality for all Americans. That’s probably why our opponents hate her so much. But dancing on the grave of an American hero the day after her death is simply beyond the pale, and it should be a clear signal to Californians about who is really on the side of equal rights,” the Yes on 16 campaign said in a statement.

Reached for comment, Fontanilla said, “I never said anything disparaging and paid my respects. I don’t know what you are talking about.”

LAID OFF HOSPITALITY WORKERS CARAVAN TO THE CAPITOL

A caravan of unemployed hospitality workers is set to carvan to the Capitol on Tuesday to rally for AB 3216, a bill currently sitting on Gov. Newsom’s desk.

AB 3216 would provide a right of recall and retention to hotel, private club, event center, airport or building services workers who have been laid off due to the state of the COVID-19 emergency.

“Hospitality, janitorial and airport workers are among the hardest-hit by reduced hours, layoffs, and terminations during COVID-19, but many have no guarantee of a right to return to work when business reopens. AB 3216 would guarantee the most experienced of these workers the ability to return to their jobs when the crisis subsides,” according to a statement released UNITE HERE Local 11, which represents more than 30,000 hospitality and tourism workers in Southern California and Arizona.

The caravan of workers, from SoCal, the Bay Area and Sacramento, is expected to hold a socially distant press conference on the north Capitol steps at 4 p.m., where they plan to ask to meet with Gov. Newsom and deliver a letter authored by five laid-off workers from across the state.

QUOTE OF THE DAY

“The Governor should hold a stand alone press conference, solely to answer questions about the problems within EDD. Californians deserve answers.”

Best of the Bee:

Tue Sep 22 , 2020
A Central Valley Republican lawmaker hasn’t asked for the same pay cut California state workers are taking despite saying on social media that a request had been made on his behalf. Assemblyman Devon Mathis of Visalia made the claim after someone identifying herself as a union leader responded to a […] 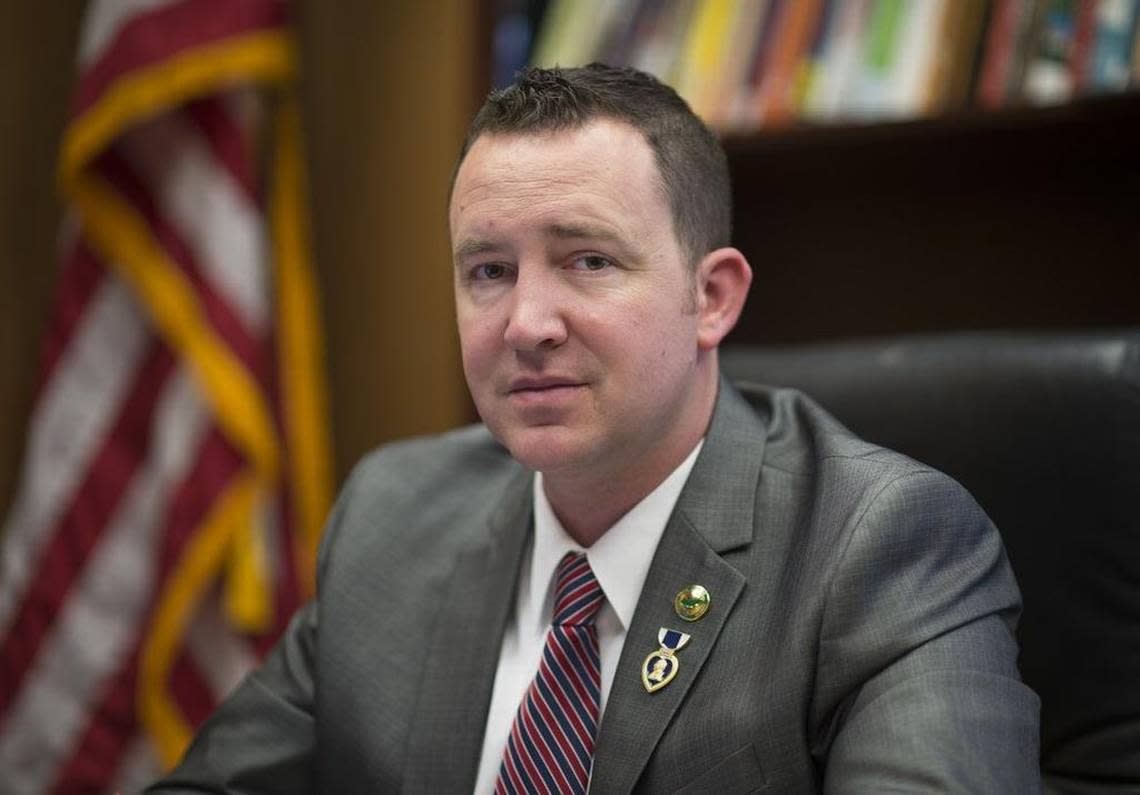