On Feb. 16, Marissa and Adam Goldstein launched Rafi Nova, a company selling backpacks for adventure travelers. Sustainably sourced, using textiles woven by Hmong women in Vietnam paid at a fair-trade rate, the backpacks might have been a thing. But the pandemic hit and domestic and international travel ground to a halt.

“Nobody was even leaving their house, let alone buying a $230 travel pack,” says Ms. Goldstein, whose business is in Needham, Massachusetts. “We probably launched a travel fashion company at the worst time in history.”

With few sales and no money left, the couple decided they at least could put their Vietnamese factory partners to work making face masks, which they could donate to front-line workers in the United States. “It wasn’t a business opportunity,” Ms. Goldstein says. “It was out of a sense of service.”

Then family and friends started asking if they could buy some of the masks. On a whim, Ms. Goldstein took a selfie of herself with a mask and put up a message on her website and Facebook page, saying, “We have face masks.” The next morning, she had $25,000 in mask orders and the company has never looked back. In seven months, the company has 30 employees in the U.S. and four more in Vietnam. Now expanding into additional products, the company will move to a new facility on Oct. 1, boosting capacity by 60%.

From Boston to Silicon Valley, the pandemic has thrown entrepreneurs a curveball like no other. Recessions usually crush fragile startups and convince many would-be entrepreneurs to hold off until times get better. But in the midst of this downturn, the number of new businesses in the U.S. is on the upswing. It’s not entirely clear why: Are entrepreneurs seizing on an opportunity – or just desperate because they just lost their job?.

“The crisis is unlike any other crisis we’ve seen before,” says Marc Penzel, founder and president of Startup Genome, an innovation policy advisory and research firm with offices around the world. “We’ve never had a situation where the economy had to shut down.”

The result is that entrepreneurs, instead of seeing a general contraction, are experiencing wildly different scenarios. Many entrepreneurs have found themselves in the wrong industry at the wrong time. And if Congress doesn’t provide additional emergency aid – its Paycheck Protection Program loan option for small businesses expired last month – more than a quarter of small-business owners say they won’t survive more than three months, according to Small Business Majority, a national advocacy group that surveyed its network of 70,000 businesses in August. Another 1 in 5 say they won’t make it past the next four to six months. Nearly 1 in 6 have already considered bankruptcy.

The dark clouds gathering around entrepreneurs are not unique to the U.S. In its global survey, Startup Genome found 41% of startups have three months or less of cash left, up from 29% before the pandemic. One reason is that downturns tend to accelerate existing trends, such as the move from on-site to online retail.

“You had businesses that were struggling already,” says Donna Kelley, professor of entrepreneurship at Babson College in Massachusetts and a member of the oversight board of the Global Entrepreneurship Monitor. “This was the final nail in the coffin.”

When he started his tourism company four years ago in eastern Kansas – not exactly a tourist mecca – Casey Cagle knew it would be an uphill climb. What he didn’t count on was the pandemic.

The lockdowns killed his spring season. When summer rolled around, he didn’t even bother trying to market the nearby Flint Hills and Tallgrass Prairie National Preserve to outsiders. Part of the reason was that he himself contended with an ailment in January that has hung on for months. Two tests say it’s not the coronavirus, but Mr. Cagle is taking no chances for his family or his clients. He’s staying at home – and home-schooling his daughter.

“It’s definitely a 180” turn, he says. “My mission before was to boost our local economy by bringing in people from the outside.” Now, he’s urging outsiders to shelter at home and not come – for their sakes as well as for his community.

Typically, business formation doesn’t pick up immediately when the economy begins to recover, says Professor Kelley of Babson. In the Great Recession it lagged for two years.

But after an initial plunge in March, the number of “high-propensity” business applications surged in May and for the year is running 12% ahead of last year’s pace, according to Economic Innovation Group (EIG), a Washington-based advocacy group. High-propensity applications are highly likely to become active firms with employees, according to the Census Bureau.

That would tend to rule out one reason for the surge: a flood of applications from suddenly jobless workers desperate to find something else – perhaps hanging out shingles as freelance workers. Another potential reason for the surge is that applications earlier in the year might have been backed up. But as the numbers have continued above last year’s levels, EIG has grown more optimistic: “Some of the surge may therefore represent the real thing: entrepreneurs finding opportunity in the crisis,” the group’s blog said this week.

The pandemic has actually helped some entrepreneurs. Already in April, when Startup Genome was surveying entrepreneurs worldwide, it found that 12% of startups had seen revenue rise by 10% or more. The paradox of recessions is that while they typically kill more than the usual number of startups, those that survive tend to be remarkably resilient. During the Great Recession, for example, transit giant Uber and mobile-payment platform Square were formed.

“A crisis always begets opportunity in more than one way,” says Mr. Penzel of Startup Genome. Over half of the Fortune 500 companies were started during a contraction and over 50 of them were created in the Great Recession alone, he says, and they are collectively valued at $145 billion.

While Bryanne Leeming was earning her MBA from Babson College, she was prototyping her idea of teaching children software coding through play. In 2018, she launched Unruly Studios, an education technology company in Boston. By 2019, the firm was selling to public schools its floor buttons, called Splats, which students can program to light up, make sounds, or collect points when they are stomped on. The idea is to teach coding skills through games. The first quarter of 2020 was the company’s best quarter yet.

When schools began to close in the spring because of the pandemic, the company’s team began talking to educators around the country about what they could use to teach online, in class, or in some hybrid model. As children were more isolated than normal during the summer, the company began focusing on strategies for improving social emotional learning. This fall, music teachers began to approach the company about using Splats for students to play music on, because the screens are easier to disinfect than the mouthpieces on recorders. The young company is rapidly approaching profitability.

“September already has been one of our best months yet,” says Ms. Leeming. “We have plans to accelerate this fall.”

The pandemic may well throw more curveballs. With the market for masks saturated, the Goldsteins are already steering Rafi Nova into new areas, offering belt bags and other mask accessories and copper-infused anti-microbial gloves. It will soon launch a line of apparel. The company gives away products and uses part of its profits to fund nonprofits.

“I never want to take advantage of the pandemic and the hurt and the suffering,” says Ms. Goldstein. “And so we try to create products that really help people like the masks and then take that a step further and make sure that our products can get into everyone’s hands, whether they can afford it or not.”

Editor’s note: As a public service, all our coronavirus coverage is free. No paywall.

Read this story at csmonitor.com

Become a part of the Monitor community

Sat Sep 26 , 2020
CUTCHOGUE, NY — For many, the coronavirus pandemic has been a time rife with anxiety and uncertainty as families struggle to adjust to the new normal. But for Tanya McDowell of Cutchogue, the last months have been a pivotal turning point — and have meant a life shift that sent […] 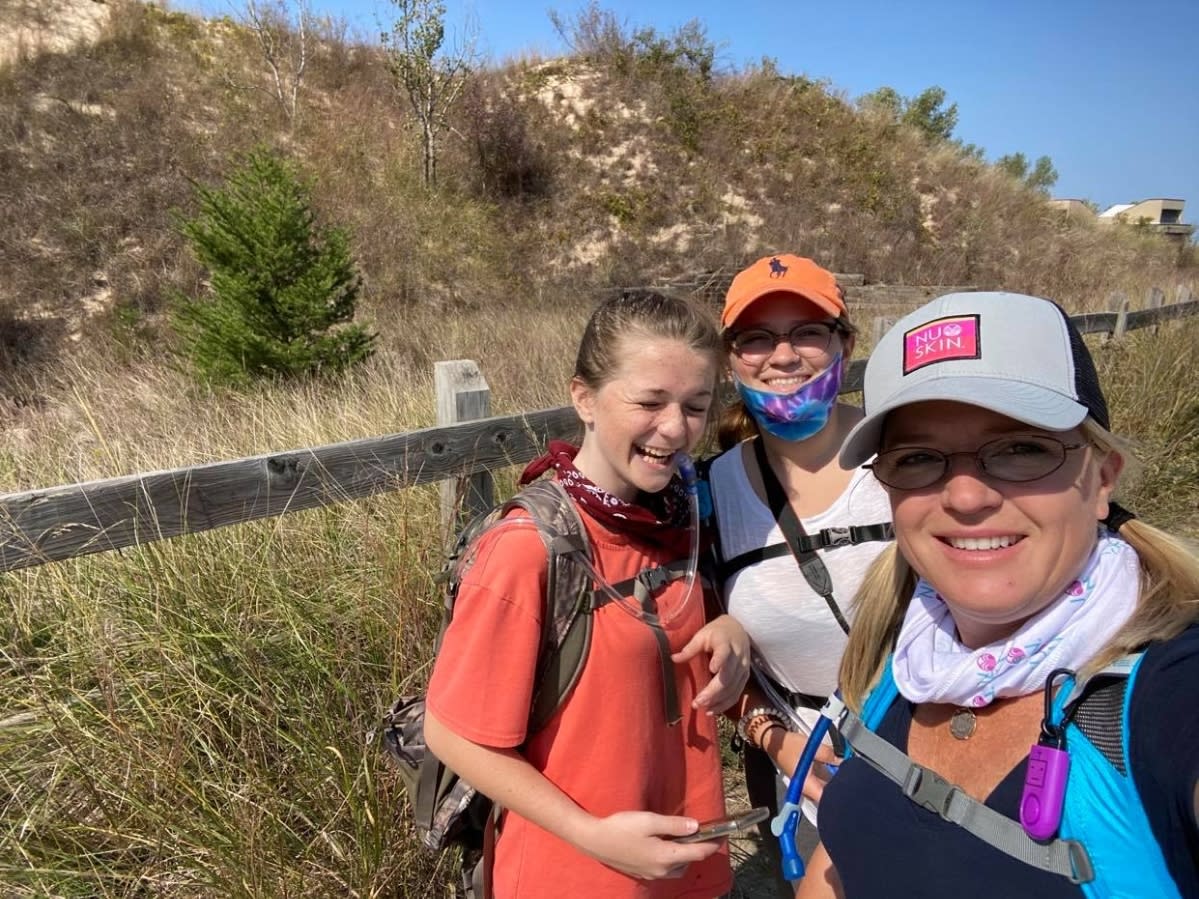