Few things are more difficult than getting by on a paycheck that’s just not large enough. Some of America’s hardest-working people are trapped in low-wage jobs and don’t end up seeing a lot of financial return. When you’re earning at or just above the minimum wage, you might find yourself needing to supplement your full-time job with one or two part-time jobs just to make ends meet.

There’s a reason why fast-food workers are so frequently at the center of debates over a living wage. With a median hourly wage of just over $10 an hour, the country’s 3.68 million food preparation and serving workers are America’s lowest-paid profession.

The shampooers at your salon are making about the same amount of money as the typical food prep worker. However, with just over 13,000 shampooers nationwide, it’s a much smaller group.

At just under $11 an hour, fast-food cooks are making more than many of their co-workers — but barely. There’s also less than half a million jobs like this nationwide.

While vast sums of money might be passing back and forth across the blackjack table, little of it winds up with the dealer. The median hourly wage for casino dealers is just under $10 an hour, so don’t forget to leave a tip any time you win a big hand.

Just over half a million Americans are making a living by washing dishes. The mean hourly rate comes to a little over $11 an hour.

Workers at cafeterias or coffee shops can expect to make slightly more than people doing similar work for fast-food restaurants. Their average annual wage is just over $23,000.

Cashiers get paid less than $11 an hour, though no prior work experience is needed for this position.

Restaurant hosts and hostesses are often the first faces that people see when entering an establishment. It’s also a safe bet that they’re among the lowest compensated — their median hourly wage comes to just $10.65.

Working at the local amusement or water park is a classic first job for many teens, so it might not be surprising that wages are so low for this profession. The median hourly rate comes to just $10.70.

Whether you’re at a movie multiplex or a tiny community playhouse, the various ushers, attendants and ticket takers who help manage the crowds are among the lowest-paid workers out there. However, there are under 135,000 of these jobs across the nation.

These job titles are a much longer way of saying “busboy,” albeit one that is gender-neutral. Whatever you want to call them, these workers only earn a median hourly wage of $10.71.

Pressers press or shape garments either by hand or by machine. It’s not work that pays a lot, though, as their median wage is just $11.23 an hour.

One might hope that lifeguards or ski patrol workers earn significantly more, considering the importance of their jobs. However, the almost 150,000 people in this profession are earning a median wage of $10.77 an hour.

Given how much it costs to get your clothes dry-cleaned, you might expect people working in laundry and dry-cleaning services to earn more. But the workers in the industry don’t appear to be the primary beneficiaries of your money, pulling down a little over $11 an hour.

Another crucial job that some might be a little concerned to see land on this list, child care workers are clearly not in it for the money. Earning under $25,000 a year, they’re likely struggling to make ends meet — especially if they’re living in the city.

Restaurants are notoriously risky and expensive investments, but that’s not because you’re getting squeezed on labor costs. Many of the lowest-earning jobs in the country are all in the food industry, with prep cooks coming in as the next entry.

There’s an abundance of food service jobs outside of just restaurants. And, even better, these gigs pay a median hourly wage about a dollar higher than that for combined food preparation and serving workers.

There are about a quarter-million hotel and motel desk clerks employed throughout the country. These clerks who help you check in and out are earning about $11.39 an hour, on average.

While a majority of the food professions listed prior to this are low-skilled positions, the best short order cooks are really talented. But the difference in wages undershoots what you would expect, with short order cooks typically earning less than $11.50 an hour.

With the baby boomer demographic aging, the demand for home health aides will likely continue to rise for the foreseeable future. And, for their sake, let’s hope that helps drive up their compensation. Home health aides pull in a median wage of $11.63 an hour.

Food Preparation and Serving Related Workers, All Other

This represents something of a catchall category for food workers not otherwise specified, with the BLS defining these workers as “all food preparation and serving related workers not listed separately.”

Working as a maid at a place like a hotel can be incredibly difficult work, keeping you on your feet and hustling all day. There are certainly some options for housekeeping on a smaller, more focused scale, but wages generally aren’t very high across the category. Even the top 10% of earners pull down just over $17 an hour.

The days of needing to change reels at least five or six times per film are long gone for the most part, so it might make sense that projectionists aren’t earning much money. With a median hourly wage under $11, they likely aren’t making all that much more than the people working concessions.

Clearly, this is one profession where it’s hard to say just how relevant the listed mean annual wage really is. While many waitresses and waiters are just scraping by, others are lucky enough to be pulling down tons of tips at popular spots — a lot of which isn’t getting reported — and earning a much better hourly rate than their official BLS figure would reveal.

There’s a little over 110,000 professional manicurists and pedicurists in America, but they’re not making a ton of money for maintaining your cuticles. The median hourly wage comes out to $11.70.

Taking care of a pet can be a lot of work, and animals don’t stop needing care just because you decide to take a vacation. So, it shouldn’t be surprising to see that there are nearly 200,000 nonfarm animal caretakers in the U.S., working jobs at places like kennels, animal shelters and even the circus.

Mechanics — whether it’s for boats or cars — are among the 50 lowest-paid professions out there. And, with a median hourly rate of $11.64, it might have some people more closely scrutinizing the rate that the local garage is charging for “labor.”

The real cost of having so much cheap food available on supermarket shelves is the low wages paid to the farmworkers who are growing it. With the median hourly rate coming in at $11.69, many farmers are getting food to you on the cheap by reducing labor costs.

There are over 650,000 packers and packagers in the United States. And, it might be safe to assume that figure will keep climbing as more and more consumers turn to online shopping and parcel shipments.

Making sure fruits and vegetables are getting put in the right categories is an important part of bringing produce from the farm to the consumer. These workers don’t make a lot, though, with a year’s wages coming to a little over $26,000.

The smallest profession on this list so far, there are just 17,610 people employed as locker room, coatroom and dressing room attendants in the United States.

This is another largely tip-based profession where the BLS probably isn’t capturing the full extent of their compensation. Hourly wages aren’t usually the primary source of income for most mixologists.

Cleaners of Vehicles and Equipment

It’s hard not to notice that the cleaners of vehicles and equipment are making about $1,400 a year more than maids and housekeeping staff. But then again, your den won’t break down and stop working if it isn’t dusted regularly, so this could make sense.

The bellhops and other attendants who help you with your bags are among the lowest-paid professions in the country. Their median hourly wage comes out to just $11.64.

Sewing machine operators make and repair garments with mechanical assistance, but they don’t make a whole lot for doing so. That rate works out to just over $500 a week.

The cashiers at casinos or racetracks are often handling vast sums of money, but they’re keeping very little of it for themselves after a day’s work. Their median hourly rate comes to just under $12 an hour.

Moving further up the, ahem, food chain for restaurant workers, there are 1.34 million people working as cooks across the country. However, they’re earning fairly modest wages, pulling down about $2,300 a month, on average.

Food Processing Workers, All Other

This job category includes any gig in food processing not specifically singled out elsewhere. The median hourly rate for these workers comes to $12.44.

Gaming and Sportsbook Writers and Runners

Writers and runners are the people posting information at sportsbooks or helping run bingo or keno games. Of course, with earnings of just $530 a week, most of them likely won’t have enough left over to place many bets themselves.

Any job that involves handling raw poultry and sharp knives seems like it should pay a lot better than this. Meat trimmers have a median hourly wage of under $13 an hour.

Personal Care and Service Workers, All Other

While this umbrella category contains a wide variety of potential jobs, there are just under 60,000 service workers who aren’t specifically categorized as another profession.

It’s yet another job in the food services industry. Cooks working in cafeterias or other institutions are making a bit more than many of their restaurant counterparts, but they’re still pulling down just $12.91 an hour.

“Recreation workers” sounds a lot like an oxymoron, but in this case, it describes the many different kinds of workers with jobs at recreation facilities. They facilitate activities oriented around arts and crafts.

Retail salespeople get paid better than the cashiers who just handle transactions, but they’re still among the lowest-paying jobs in the country. That $28,310 salary comes out to just under $550 a week.

Meatpacking is tough, dirty work. However, despite its difficulty, these workers’ median hourly wage comes out to only $13.59.

This is one profession that’s undergoing tremendous change at the moment. However, it’s not a job with tremendous financial return — the median wage comes out to about $12.50 an hour. But workers might be able to earn a little more from tips.

Funeral attendant already sounds like a pretty sad profession to have, even before discovering that it pays just $12.69 an hour, on average.

Aides to physical therapists are the top earners on this list of low-paying jobs, making an average of $28,500 a year. That translates to a biweekly paycheck of just under $1,100.

The 50 Lowest-Paying Jobs in America

It turns out feeding people doesn’t pay well. Of the 50 lowest-paid professions in America, 18 involve preparing food, handling food or working in a restaurant. So, the next time you’re going out to eat, it might be worth putting down a larger tip after paying for your meal.

The suburbs to the rescue! Food trucks hit by virus find new foodies.

Mon Aug 24 , 2020
Lynnwood, Wash. – On a warm summer night, two food trucks pulled onto a tree-lined street in a hilltop neighborhood outside Seattle. The smell of grilled meat filled the air, and neighbors slurped on boba tea drinks. Toddlers, teens, their parents and dogs sat in the grass, chatting behind masks, […] 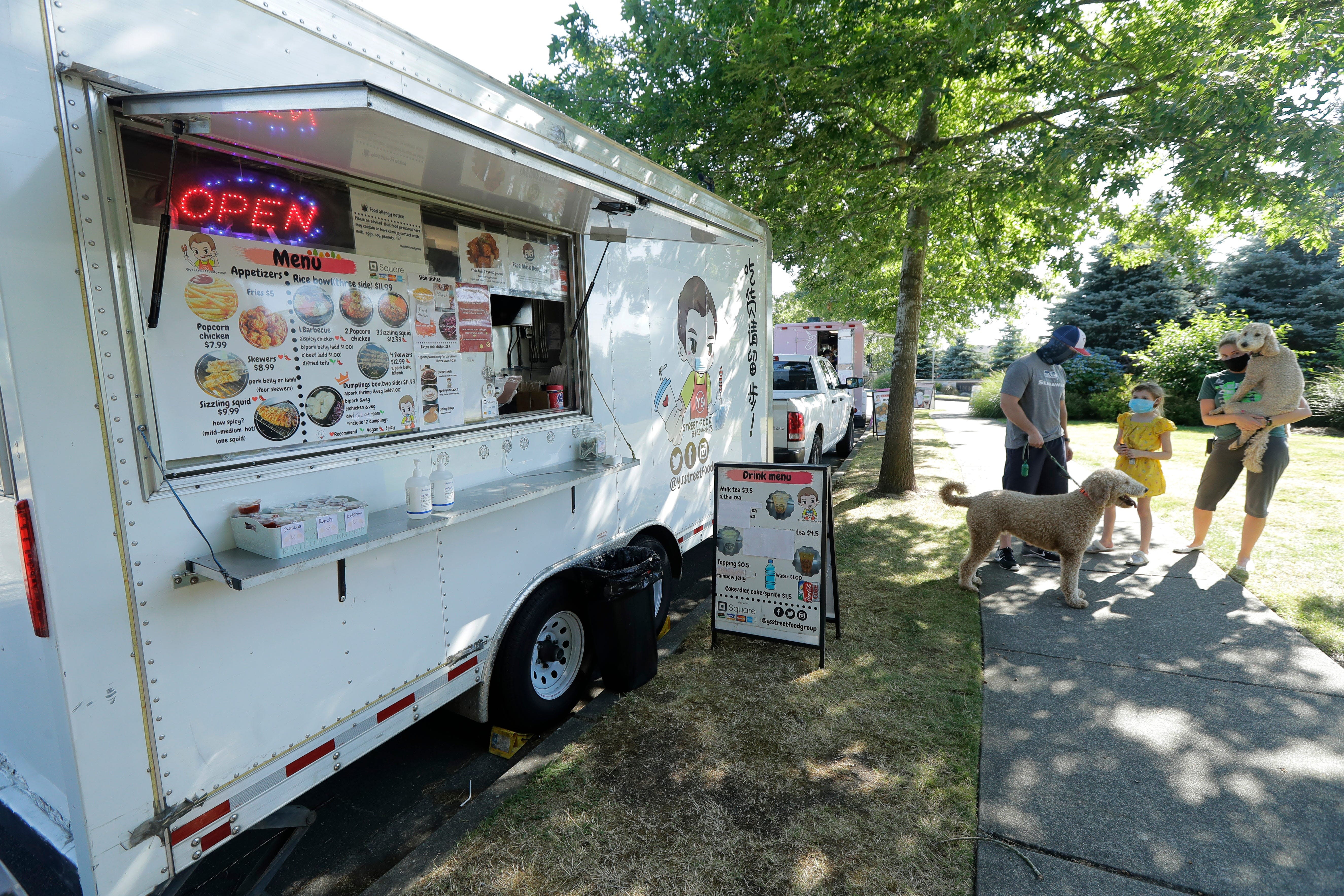