A provision tucked into the pandemic relief package that Congress passed Monday could go a long way toward ending one of the most notorious and exploitative practices of American health care.

The provision would create a new law designed to stop “surprise bills,” which are the charges people with health insurance get because, unknowingly, they received medical services from a provider who isn’t part of their insurance networks ― like a radiologist consulting at a hospital, for example, or even an ambulance company.

The fate of the anti-surprise billing initiative depends on the fate of the overall relief package, which President Donald Trump has hinted he might veto over unrelated provisions. And even if he ultimately signs it, the new protections would not be perfect.

They are the product of bipartisan compromise. The only reason they got into legislation is that advocates made concessions both to key industry groups and to a powerful House Democrat whose objections helped kill similar legislation a year ago.

In the long, ongoing struggle to make health care affordable for all Americans, enactment of this new law would represent a modest victory at best.

But even modest victories are pretty rare in health care these days. And this particular one would mean real, occasionally life-changing relief for millions of Americans whose sole mistake was to get sick or injured, and require medical care.

The Problem Of Surprise Bills

Surprise bills can come from both emergency and non-emergency care. The prototypical case is a patient who schedules surgery with an in-network physician and at an in-network hospital, but ends up drawing an anesthesiologist who isn’t part of the network ― and then gets a separate bill for the anesthesia services.

The bills can run into thousands and sometimes tens of thousands of dollars. They are also quite common. Overall, studies have found, 1 in 5 emergency room visits and nearly 1 in 10 elective procedures generate some kind of surprise bill.

Surprise billing has existed at least since the 1980s, when private insurers began constructing limited networks of doctors and hospitals as a way to bargain down the prices they paid for medical care. But many analysts believe the practice has become more common ― and more harmful ― in the past few years.

The main reason is private equity companies, which have been buying up physician staffing firms that provide personnel for emergency rooms and hospitals. The firms saw an opportunity to jack up out-of-network fees, partly to collect extra payments from patients and partly to increase their leverage with insurers, in order to extract higher fees overall.

One 2017 study, by researchers at Yale, found that when the staffing firms take over responsibility for a hospital’s emergency rooms, prices for medical services jump.

That study got a lot of attention ― and it came in the middle of a series of exposés, by reporters at The New York Times, Vox and Kaiser Health News, that put a spotlight on both the role of private equity and the financial duress of patients facing the unexpected charges.

The resulting outrage helped advocacy organizations get the attention of Congress, where the idea of finding a solution got bipartisan support.

Although Democrats and Republicans may not agree on much when it comes to health care, lawmakers in both parties could see the fundamental unfairness of the situation. Somebody having a heart attack really isn’t in a position to pick a hospital, and even a well-informed consumer might not be able to check and then guarantee that a radiologist called in to consult on one X-ray is in-network.

The Debate Over Solutions

But the consensus over surprise billing broke down when it came to figuring out how to curb or end the practice.

One way to solve the problem is to set some kind of standard rate that doctors and hospitals would have to accept, even if they are not part of a patient’s insurance network. The law could dictate, for example, that out-of-network providers accept some multiple of Medicare or some blended average of what private insurers pay in the community. A 2016 California law uses this approach, which is the one consumer advocates, insurers and employers have generally favored.

An alternative would be to enlist independent arbitrators, who could then determine reimbursements for surprise bills either on a case-by-case or group basis. This is the approach New York state adopted when it addressed surprise billing. It’s also the approach that provider groups and private equity firms have supported, because it would likely result in higher fees.

Legislation coming out of Congress is rarely perfect … but the bill ended up in a pretty strong place.Loren Adler, USC-Brookings Schaeffer Initiative for Health Policy

To an individual consumer, either approach would look similar because ― in either case ― patients would pay no more than what they would normally pay for in-network services, through their standard copays and deductibles.

Last year, congressional negotiators appeared to have settled on a compromise in which smaller bills would use the payment benchmark method and larger bills would go to arbitration. But a dark money group, funded by the private equity firms, spent heavily to fight it ― and then, at the last minute, House Ways and Means Chairman Richard Neal (D-Mass.) introduced a new proposal that signaled he wasn’t willing to go along with the emerging compromise.

Whether Neal was doing so to protect his legislative turf, help the providers who fund his campaigns, or both, the consequence was to stop negotiations and kill the legislation for the year.

And that appeared to be the end of it, at least as long as COVID-19 was such a central preoccupation, until a few weeks ago when a new compromise emerged ― with Neal’s endorsement.

It uses arbitration, which is what the industry and Neal always wanted. But it comes with a series of “guardrails” designed to prevent providers from abusing the system and keep the final fees closer to where consumer advocates want them.

Among other things, arbitrators can take into account a variety of factors but not the actual provider charges. In other words, the outrageous fees from the private equity-owned staffing firms won’t even be part of the discussion.

The law’s full impact would ultimately depend, in part, on the specific regulations for implementing it. Writing those would fall to the Biden administration, which would be under the same pressure from advocates that Congress was while crafting the legislation.

The law would also have its gaps, some of which are already apparent. Among the biggest is that it wouldn’t cover ambulance fees, which have been one of the most notorious sources of surprise bills. Mostly that’s because many ambulance companies are owned by local governments, not private firms.

But the bill does call for studying the problem further. And it would cover air ambulances, which have been a frequent source of outrageous bills and in many cases are also owned by private equity firms.

“Legislation coming out of Congress is rarely perfect, especially with powerful industries lined up against reform, but the bill ended up in a pretty strong place,” Loren Adler, associate director of the USC-Brookings Schaeffer Initiative for Health Policy, told HuffPost.

Adler, who has done some of the groundbreaking research on surprise bills, said that “Congress is putting an end to a market failure that was being exploited by private equity and some other large groups in a manner that should reduce health care costs overall. That’s a win in my book.”

The federal law would make a difference even in states like California, which already has strong surprise billing laws on the books, because states don’t have authority to regulate insurance plans for large corporations that “self-insure” (meaning they pay insurers to administer employee health plans, but cover the expenses out of their own funds). Such plans are, by law, under federal regulation exclusively.

And in states like New York, where the existing laws are weaker, lawmakers might be able to upgrade to the new federal standard ― especially if providers decide it’s easier to have one system, rather than two, even if it’s a system that pays them somewhat less.

Of course, even with the new federal law in place, many Americans would struggle with the hassles and financial burden of America’s uniquely ragged health care system, which is the only one in the developed world that still does not guarantee coverage as a right of citizenship ― and one of the very few that routinely asks individual patients to pay large out-of-pocket costs for essential medical care.

But expanding access to health care has been an ongoing process going back decades ― with each new reform, big and small, making it easier to achieve the next one. And that is what seems to have happened with surprise billing, according to Anthony Wright, executive director of Health Access, an influential consumer advocacy group in California.

Nobody was paying attention to surprise billing a decade ago, Wright said, in part because the U.S. health system had so many other, even more egregious failings. But at least some of those problems have become a lot less severe, thanks to the Affordable Care Act, and that’s put issues like surprise billing into much sharper relief.

“Prior to the ACA, surprise bills existed but were on a long list of abuses and gaps that patients fell through in our health system,” said Wright, who was heavily involved in lobbying for California’s law. “If an insured patient got a huge bill, it could be because they were denied for a preexisting condition, or underinsured with junk coverage, or 10 other reasons. When the ACA set some standards and safeguards, this was a conspicuous problem that remained.”

Wright, like most advocates for more affordable health care, would like to see even stronger protections against surprise billing. Even California’s law could do more, he says.

But in Sacramento, as in Washington, that would require yet another difficult legislative confrontation with representatives of the doctors and hospitals. Victories against those groups are hard to come by, which is why even the modest ones deserve some recognition.

How To Have a Holiday Dinner on a Budget

Wed Dec 23 , 2020
Traditional Christmas Duck Holiday Dinner with Oranges, Pomegranate, Potatoes and Brussels Sprout. The holidays can bring a much-needed sense of joy and sparkle to challenging times. However the pressure to make the season special, with all the gifts, activities and food that go into that, adds a lot of stress […] 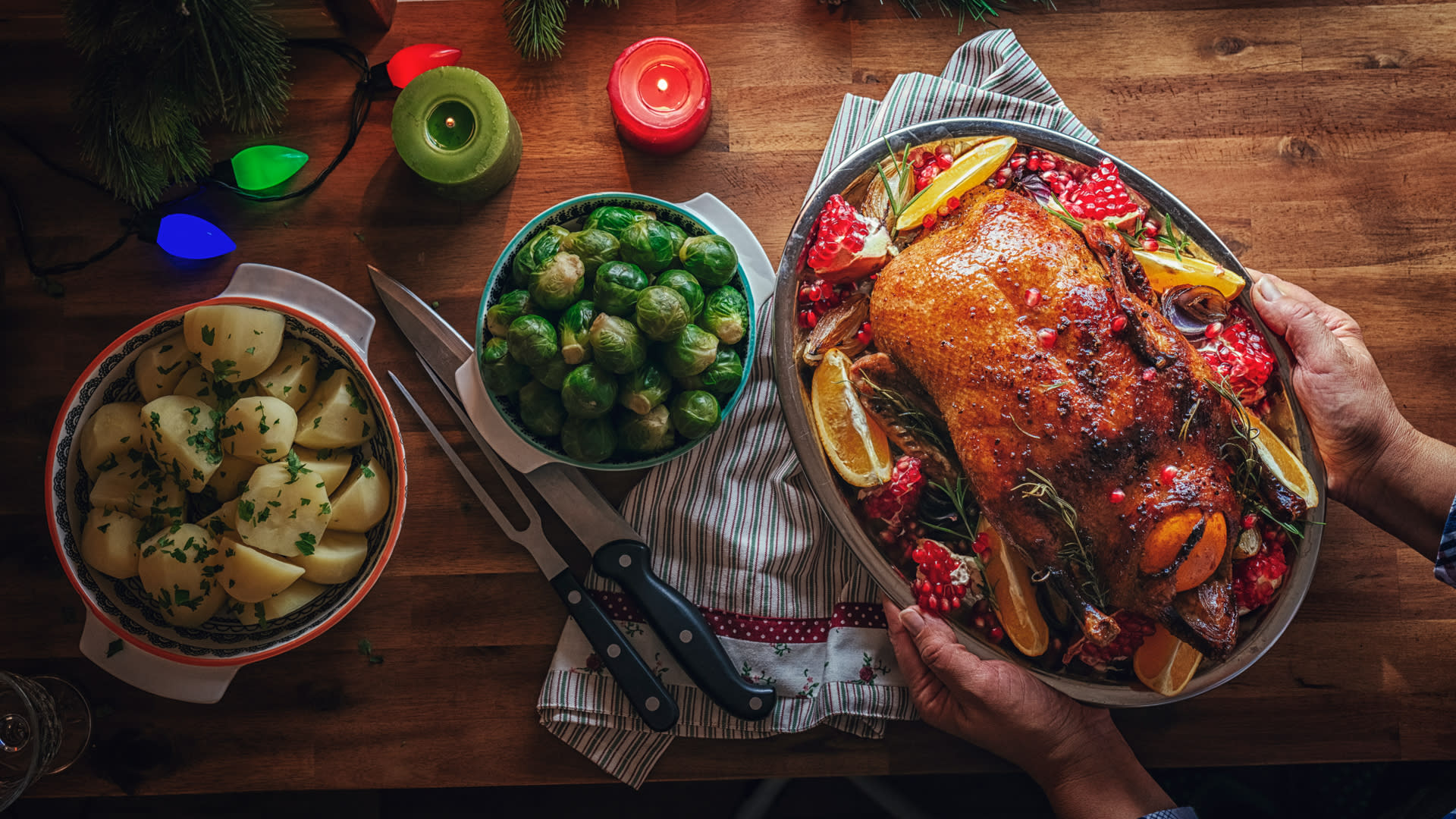