One of the strangest of inconsistencies surrounding the latest Covid-19 restrictions was confirmed this week. After December 2, people living in Tier 3 in England will be advised not to travel to other parts of the UK for a holiday, for fear of the risk of spreading the virus. But they will be allowed to travel abroad. Where is the logic in that? Is this even an ethical distinction to make?

Logic was further cast to the winds when the Transport Secretary Grant Shapps attempted to justify the new rules by saying that “we’re not as a government in the business of telling people whether they can’t [sic] travel”. Yup, that’s right – this is the responsible minister in the very same government which continues to tell us when and where we can travel. And just in case we thought he might have “mis-spoken” he went on to affirm “I’m not trying to tell people what they should and shouldn’t do with regard to travel”. I had to replay the interview several times to make sure I wasn’t hearing things.

Shapps was being interviewed on Radio 4’s Today programme because the government’s Travel Taskforce had just announced – three weeks later than promised – the results of its deliberations. From December 15, the quarantine restrictions imposed on anyone returning from a destination which isn’t on the Government’s travel corridors list will be able to reduce their self-quarantine time from two weeks to less than one. You’ll have to pay for a test five days after you arrive in the UK – costing up to £120 per person – with a result usually delivered in 24 to 48 hours. But as long as you are negative, you are then free to end the quarantine.

It’s a victory for our Test 4 Travel campaign, but it comes much too late to make much difference to most travellers. And the report says very little about one absolutely crucial point – the Foreign Office’s (FCDO) advice which is still in place to warn against all but non-essential travel to most countries in the world.

It’s true that it’s now much more feasible for those of us who are finally released from lockdown to travel to far more places. But because that FCDO advice remains in place for the vast majority of countries which aren’t on the quarantine-free list, you will find it much harder to get travel insurance (only a handful of companies offer such cover). And in most cases you won’t be able to book a package holiday to those destinations either, because tour operators will not offer holidays against FCDO advice. This is a major disadvantage because packages give you much better protection in case of cancellations or financial failure than if you book a flight and accommodation independently.

Of course, not everything is in our hands. There are several countries on the travel corridor list which you can’t visit anyway because they have their own restrictions. Australia and New Zealand, for example, are closed to tourism, as is the US. And there are others on the list which you can’t easily get to – such as the Azores and some Greek islands – because the only flights are via a change of plane in an airport which is not in a travel corridor.

But quite frankly, this blanket advice has surely now had its day. Large numbers of people have already had the virus, vaccinations are due to start soon – very likely by December 15 – and the belt-and-braces approach to testing returning passengers hugely reduces the risks of those who are unknowingly carrying the virus from spreading it.

If this government really believes it shouldn’t be in the business of telling people “what they should and shouldn’t do with regard to travel”, the Transport minister needs to have a word with the Foreign Secretary.

The FCDO’s advice is vital for many travellers – but it should be giving an assessment of the risks in each destination to help us make an informed choice, not putting obstacles in our way.

Charities are getting creative during COVID-19. The unexpected ways some are staying afloat

Thu Nov 26 , 2020
Mitch Besser, a doctor and philanthropist married to singer Annie Lennox, at his rowing machine, where he muscled out 500,000 meters in a fundraising event for the charity mothers2mothers. (Annie Lennox) Every day during October, 66-year-old Los Angeles resident Mitch Besser stepped outside to his Concept2 rowing machine, muscling out […] 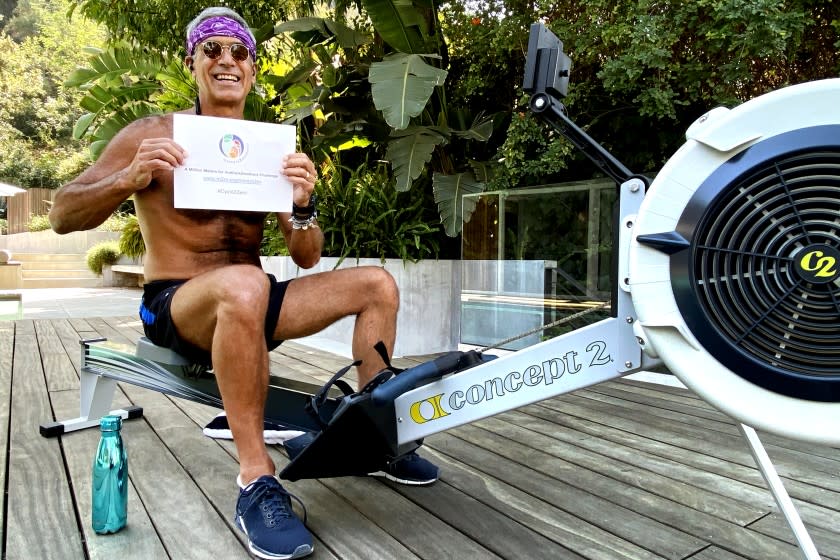