At one point in the development of “Making the Cut” with Amazon Prime Video, executive producer and host Heidi Klum decided to ask the online retail behemoth if they could have a jet for the show.

Not some dinky Gulfstream, mind you. Like…a jet jet. A real, big jet.

“We were kind of hoping to get a big Amazon plane, because I was already thinking about commercials we can shoot — like Tim [Gunn] and I hopping out of a plane with Amazon boxes, delivering them to people,” Klum said in an interview with IndieWire. “My brain was going 100 miles an hour. A plane would have been nice with sewing machines in there, like ‘OK, your first assignment is not in New York, it’s in Paris. But guess what?’ You open a plane, they go in there, and there are sewing machines everywhere. You’re not laying back and enjoying the flight, you’re designing and miserable. But [Amazon] said yes to the million dollar prize, so we were like, ‘Let’s not push our luck here.’”

It’s one of the many ways “Making the Cut” features a distinctive tonal change from Klum and fellow host and executive producer Gunn’s original incarnation of the standard-bearer of fashion design reality shows, “Project Runway.” On that series, the duo won the Emmy for Outstanding Host for a Reality or Reality-Competition Program in 2013, amid the show’s 58 total Emmy nominations during its 16-season run with the two as hosts. (The evolutionary tree of “Project Runway” has many branches splintering off into different production companies and different networks, but the show is now airing with “Project Runway” champion alum Christian Siriano and model Karlie Kloss as its hosts on Bravo.)

While “Project Runway” was renowned for its outré challenges — and delightfully and rightfully so —  “Making the Cut” offers a new model for fashion reality TV, based on the cold hard need for burgeoning fashion designers to think of the bottom line and not just the aesthetics of their creations. The challenges during the 10 episodes of “Making the Cut” reflect the need to blend art and commerce; designers were required to create both runway and size-inclusive ready-to-wear versions of designs; oversee a photo shoot for a social media campaign; and design and help with the installation of a pop-up shop for customers to browse.

Amazon executives are sprinkled throughout the series; finalists Jonny Cota and Esther Perbandt each presented comprehensive business plans to the president of Amazon Fashion, Christine Beauchamp, in her incredibly intimidating “Succession”-esque office with floor-to-ceiling windows in Manhattan. Gunn said that the presence of Amazon Fashion’s Principle Product Manager Stephanie Park — who makes fleeting appearances on the show — was much more influential than revealed in the aired product.

“She traveled with us most of the show, and when she wasn’t with us physically, she was being sent images,” Gunn said in an interview with IndieWire. “She was instrumental in helping us and each individual designer that won on that particular episode. She was helping everyone think through the evolution of the commercial runway look to how does this translate to Amazon fashion under $100? How does this seduce the consumer who is going to the ‘Making the Cut’ page on Amazon Fashion? She’s brilliant.”

The affiliation with Amazon is evident throughout, not just in name drops, executive appearances, and product placement, but in the sheer scale of the enterprise. (Quick primer: In the first financial quarter of 2020, Amazon made $75.5 billion-with-a-’b’ in revenue. That’s before the pandemic made us all agoraphobes beholden to delivery.) That money is present in almost every scene; filming took place in New York, Paris, and Tokyo; there are no budget limitations on the creations from the designers. Fashion shows are set in museums, on boats, and on the top of skyscrapers. In short, Klum’s jet wouldn’t have been entirely out of place.

So how did Gunn and Klum luck out with a blank check (except, for you know, the jet)? In 2018, Gunn and Klum began to feel that the confines of “Runway” were limiting. With the duo’s Emmy imprimatur, when they began shopping the concept of “Making the Cut” with their agents and production partners, it immediately attracted attention. Reader, Amazon called them.

“They called our agents and said ‘We’d like to meet,’” Gunn said. “There were other people, but this really makes the most sense,” Klum added. “Before anyone called, Amazon was always No. 1 on my wishlist.”

“Making the Cut,” by focusing on the business aspect of the industry, figures out a way to make the reality show concept more real and more practical. It’s a lesson the designers can take with them as they advance in their careers, Gunn says.

“I say to my students all the time that the biggest challenge for any fashion designer is how to be creative and innovative,” Gunn said, “and yet not be a T-Shirt and not be a parade float.”

“Making the Cut” is available on Amazon Prime Video.

Wed Jul 1 , 2020
A&E This story was published in partnership with The Marshall Project, a nonprofit news organization covering the U.S. criminal justice system. Sign up for their newsletter here. As police work goes, the call about a suspected shoplifter was mundane. The wrinkle? A crew for the popular A&E show Live PD was filming from inside the […] 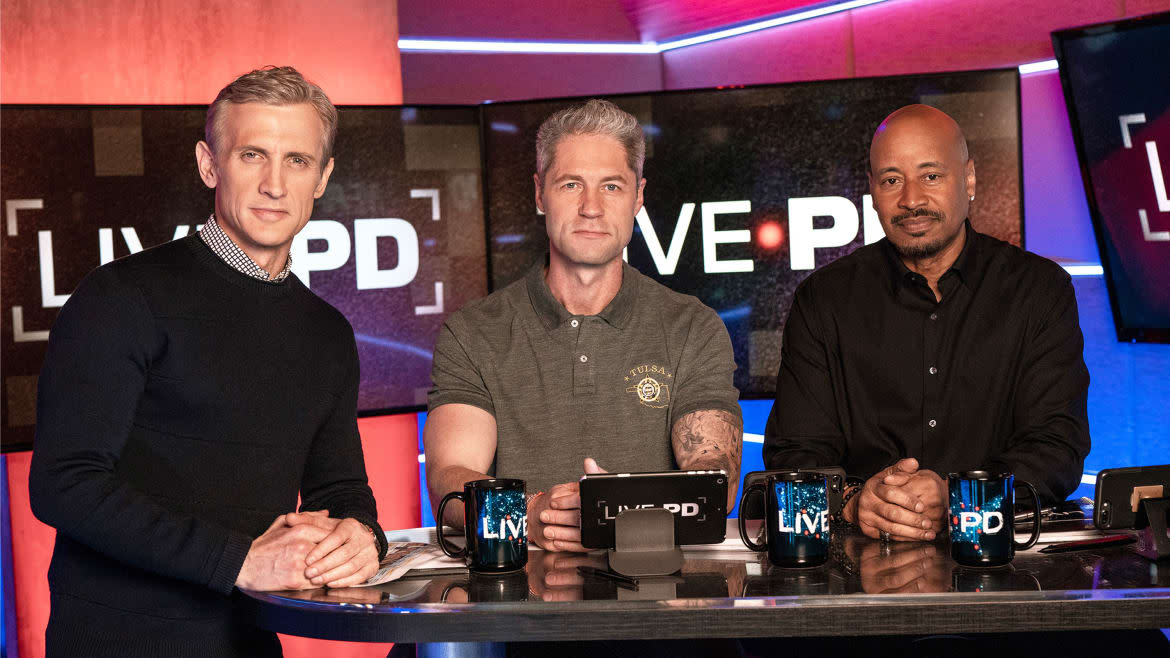