UK prime minister Boris Johnson has announced stricter COVID-19 measures in London, the South East and East of England amid concerns about the spread of a new strain of the virus which may be up to 70% more transmissible.

He introduced a fourth tier of coronavirus restrictions in the regions, as well as unveiling tighter plans around households gathering during Christmas.

In a press conference on Saturday, with England’s chief medical officer Chris Whitty and chief scientific adviser Sir Patrick Vallance, he said: “Residents must stay at home, with limited exemptions. People must work from home where they can.”

It came as the UK had 27,052 new coronavirus cases, and 534 new deaths within 28 days of a positive test. According to government figures there have been a total of nearly two million confirmed cases of coronavirus in the UK and more than 65,000 people have died.

COVID-19 rules were due to be relaxed across the nation between 23 and 27 December, with up to three households able to meet across the five days.

Johnson had previously said that cancelling festive plans would be “inhuman”, however, he had faced rising pressure to cancel relaxations amid rising infections and the new COVID variant.

WATCH: Tier 4 lockdown announced for London and most of South East – with Christmas bubbles cancelled for millions

“We cannot continue with Christmas as planned,” Boris Johnson said.

For residents in tiers one, two and three, rules allowing up to three households to meet will now be limited to Christmas Day only. In tier four, people should not mix with anyone outside their own household, apart from support bubbles, the PM said.

Rules for areas in the highest of the original three regional lockdown tiers have meant that people cannot meet socially indoors (private homes or venues like pubs) or outdoors (in a private garden or at most outdoor public venues) with anybody who they do not live with or have a support bubble with.

It has also enforced closure for local hospitality firms, marking a major hit in the crucial festive trading period. Venues including pubs, bars restaurants, cafes, cinemas and museums have been forced to shut bar takeaway services.

Londoners make up around 13.4% of the UK’s total population, according to European Commission data. However London’s economy generated almost a quarter of the UK’s total output last year, responsible for 23.6% of GDP.

Quick guide to the new restrictions

Tier 4 restrictions mean that people who live in those areas:

These effects come into place on the morning of Sunday 20 December. Restrictions will last for two weeks and will be reviewed on 30 December.

For Christmas, those who live in Tier 4 areas:

The new measures will also mean the closure of non-essential shops, gyms and hair salons which had remained open under previous restrictions. However, Downing Street suggested schools could still reopen in Tier 4 areas after the Christmas break.

Earlier on Saturday, Johnson hosted a cabinet meeting to discuss what action the country should take. Wales and Northern Ireland have already confirmed post-Christmas lockdowns.

Welsh first minister Mark Drakeford, after attending a call today with representatives of the UK’s devolved nations, announced lockdown restrictions would come into force across the country from midnight tonight.

All of Wales will be placed into the highest level of lockdown (level 4) with all non-essential shops closing.

Drakeford said: “While we all want to avoid further disruption to businesses and plans for Christmas, our overriding duty is to protect lives here in Wales. We know that 2021 will be a different and a better year. Our economy will recover.”

Festive relaxation plans have also been cancelled in Wales except for Christmas Day.

“Christmas will come again,” he added.

Meanwhile, cross-border travel has been banned in Scotland. Scottish first minister Nicola Sturgeon there would be a strict travel ban from Scotland to the rest of the UK throughout the festive season.

“People from Scotland should not visit other parts of the UK, and vice versa,” she said.

Similarly to Wales, restrictions have been cut back to just Christmas Day for the whole of Scotland.

Sturgeon added: “We will allow Christmas Day to go ahead, but as we have said from the start, only use this flexibility if you really, truly need to.”

According to Scottish government figures, there have been 110,612 confirmed cases of COVID-19 in Scotland and 4,280 people have died following a positive test for the virus.

Sturgeon added later on Saturday evening, all of mainland Scotland will move to tightest restrictions:

International travel advice to and from Scotland will be issued next week.

It came as chief medical officer Professor Chris Whitty said: “As a result of the rapid spread of the new variant, preliminary modelling data and rapidly rising incidence rates in the South East, the New and Emerging Respiratory Virus Threats Advisory Group (NERVTAG) now consider that the new strain can spread more quickly.

“There is no current evidence to suggest the new strain causes a higher mortality rate or that it affects vaccines and treatments although urgent work is under way to confirm this,” he said.

“We have alerted the World Health Organisation and are continuing to analyse the available data to improve our understanding.”

Labour leader Sir Keir Starmer said he backed the latest government action but added: “Millions of families across the country are going to be heartbroken by this news – having their Christmas plans ripped up.

“And I’m really frustrated because I raised this with the prime minister on Wednesday and he dismissed that and went on to tell people to have a merry little Christmas – only three days later to rip up their plans.”

He added: “I think the British public is entitled to more decisive leadership than that. They’re getting confusion where they need certainty.”

The hit on the UK economy

The UK economy has been ravaged by the pandemic this year, with GDP falling by historic amounts, unemployment climbing, and government debt hitting its highest point in post-war history.

In November, chancellor Rishi Sunak delivered a 12-month spending review, declaring an “economic emergency” brought on by the pandemic. It was revealed that the UK economy was on track to shrink by 11.3% in 2020.

Only just this week redundancies reached an all-time high of 370,000, the ONS said, as employers axed jobs in the run-up to the planned withdrawal of furlough support at the end of October. The official unemployment rate rises to 4.9%, with 2.7 million people now claiming unemployment or low pay related benefits.

According to Office for National Statistics (ONS) data on Tuesday, the unemployment rate rose to 4.9%, up from 4.8% a month earlier.

Employment has fallen at its fastest pace in a decade from close to record highs a year ago. Since February, just as the pandemic first hit, the number of payrolled employees has also dropped by 819,000.

Business across the country have also plunged into crisis, with many entering administration this year and battling rising debt.

Michael Kill, chief executive of the Night Time Industries Association (NTIA) said on the back of the news: “The unrelenting closing and reopening of businesses is costing owners hundreds of thousands of pounds, and coupled with the erratic decision-making around restrictions, is rapidly destroying the ability of the sector to bounce back.”

“Thousands of businesses and employees have supported the Government’s public health campaign against Covid, creating safe, regulated environments for people to socialise. This financial burden and commitment has been recognized only in lip-service, with insubstantial support measures to repay confidence in the sector.”

“There is disbelief and anger amongst the sector that the Government did not foresee the impact of transmissions by keeping retail, education and other sectors open during such a delicate period within the crisis.”

Sat Dec 19 , 2020
It’s not uncommon these days to walk into a store in October and see Christmas items on the shelves next to the Halloween items. There’s even a term for this, called the “Christmas Creep”. Of course, companies start promoting Christmas early to try to get you to spend more. Especially […] 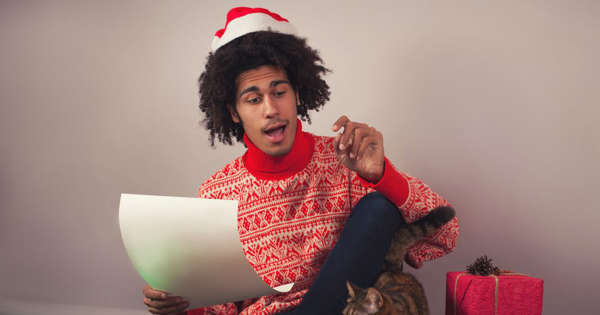