Even as Americans are expected to vote by mail in record numbers this fall, state and local election officials are scrambling to stand up dozens of in-person voting “super centers” in major U.S. cities across at least 14 states.

Many of the biggest centers will be housed in professional sports arenas, stadiums, convention centers and major hotels capable of hosting tens of thousands of voters safely during a pandemic.

Use of the facilities represents an unprecedented expansion of a vote-center model that allows local residents from any precinct to cast a ballot in person at a single location.

“We will be able to accommodate more voters at a quicker pace,” said Alice Miller, executive director of the D.C. Board of Elections. “There will be more machines — and more space.”

The District of Columbia is launching five voting super centers ahead of Election Day, including Capitol One Arena, which is home to the NBA’s Washington Wizards, WNBA’s Mystics and NHL’s Capitals.

The venues, typically packed with fans for sporting events and live concerts, have largely been empty because of COVID-19.

“Those arenas, they’re often the biggest, they’re the most visible and they’re common knowledge, if you will, to the voting public,” said Amber McReynolds, CEO of the National Vote At Home Institute, a nonpartisan voter advocacy group that is co-sponsoring an effort to open more voting megaplexes nationwide.

“Offering that option in a place that they understand, know that’s community orientated, and then also has giant space where you can actually do adequate social distancing is frankly critical at this point,” McReynolds said.

The facilities, which have been designed with crowd control in mind, offer built-in efficiency for poll workers, who are in short supply in many cities because of health concerns. Many pro sports organizations have offered up their own staffs and arena workers as volunteers to run the polling locations.

Madison Square Garden and the Barclays Center in New York City; Ford Field and Little Caesars Arena in Detroit; Dodger Stadium and the Staples Center in Los Angeles; Gila River Arena in Phoenix; Amalie Arena in Tampa, Florida; and Nationals Stadium in Washington, D.C., are among the participating venues.

MORE: Mail-in voting is hot during pandemic, but are states ready?

The location of the arenas and stadiums in urban areas where public transportation and parking options are abundant is also potentially enticing to reluctant voters who might otherwise stay home, advocates said.

“Please understand: our fans — the overwhelming majority of our fan base — are so excited that we took this on, Democrat or Republican,” Ressler told ABC News Live.

Hundreds of voters took advantage of the State Farm Arena polling location during Georgia’s primary election in June. Officials expect a significant increase in turnout starting next month for the start of early in-person voting.

“We’re gonna move to 60 processing stations and 300 voting machines to give you a sense,” said Ressler. “So it’s going to be a much more substantial effort, much larger, and frankly with many, many more voters. Anyone in Fulton County, any registered voter in Fulton County, will be able to come to our facility to vote.”

Local election officials have been stockpiling voting equipment, signage, hand sanitizer and personal protective equipment in preparation of getting the super centers online. The first early in-person ballots of the 2020 election will be cast this week in Minnesota with other states soon to follow.

“Behind every voter we will wipe up,” said Miller, who has been overseeing D.C.’s acquisition of palettes of Purell and tens of thousands of Clorox wipes for distribution to voting sites.

ABC News Live got an inside look at Capital One Arena as election officials prepared to convert the concourse area — just steps from center court and center ice — into an arcade of electronic voting machines adjacent to beer counters and hot dog stands that have gone dark.

Voters will be guided in a one-directional flow, said D.C. Board of Elections chairman Michael Bennett. “Once they voted, they will come further down the corridor and put their ballot in a tabulating machine, get their voter sticker and they can exit,” he said.

Underpinning the nationwide push toward highly accessible voting super centers has been the engagement of professional athletes from the NBA to the NFL.

“Our players are incredibly motivated to encourage people to use their voice and vote,” said Monica Dixon, an executive with Monumental Sports, which owns the Washington Wizards, Mystics and Capitals. “They have been pushing for us as a company and our employees to get engaged.”

NBA superstar LeBron James of the LA Lakers has been at the forefront of the effort, launched in part as a response to national protests for racial justice after the death of George Floyd in Minneapolis police custody this spring.

“When you have the kind of presence and success of a LeBron, I’m sure his voice is a bit more influential than others, but the good news is virtually every player in the NBA, virtually every franchise in the NBA, is trying to have a positive impact,” said Ressler.

Players across the NFL, NHL and MLB have also lent their voices to the campaign for voter engagement and polling place accessibility.

“We know that not everybody is going to vote at home. We know that some people need to register to vote on Election Day and they haven’t gotten their ballot yet. So you have to have a really good in-person voting structure to make that work effectively,” said McReynolds.

The coronavirus pandemic may have given rise to a promising new way to vote in person, but officials caution voters to keep their expectations in check.

“There are going to be lines. I’m not going to hide the fact that you may have lines. There’s gonna be lines,” said MIller

“They may move slow,” she added, “but you know what? When people go get those Air Jordan tennis shoes, guess what? They wait in line.”

Mon Sep 14 , 2020
In the switchover to electric vehicles, governments hand out subsidies to new car buyer to help make the transition a little financially sweeter. In most countries, though, the subsidies only apply for new EVs, but in Scotland that’s no longer the case. According to Next Green Car, a consumer advice […] 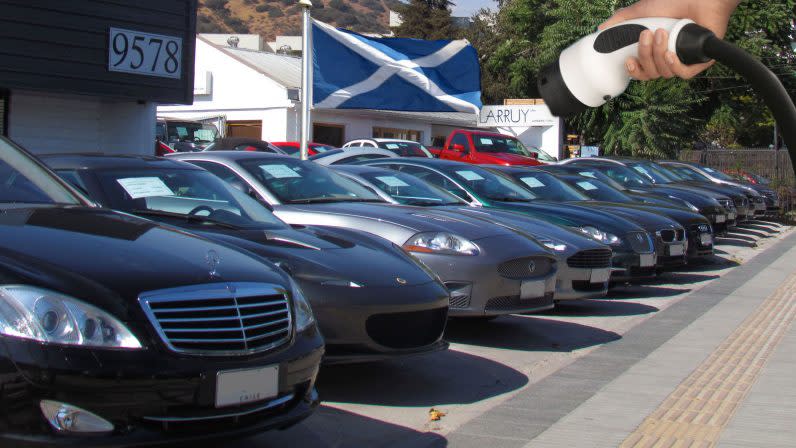