Both Zillow and Redfin beat third-quarter estimates. Zillow’s reported consolidated revenue was $657 million, but what is more interesting is how it breaks down by division. Zillow’s IMT (Internet, Media, and Technology) division grew revenue by 24%. Homes revenue, the iBuying segment, decreased 51% to $187 million. Mortgage revenue grew by 114% to $54 million.

Adjusted EBITDA exceeded the high end of the company’s outlook for all three segments, resulting in a consolidated adjusted EBITDA of $152 million. Zillow exited the quarter with $3.8 billion in cash and investments.

iBuying, when losing is winning

Neither Zillow or Redfin is making money on iBuying at this point. In the third quarter, Zillow bought 808 homes and sold 583 homes through its iBuying program, Zillow Offers. It now has 665 homes in inventory, up from 440 homes at the end of Q2. Zillow attributed part of its loss in revenue to the fact that it couldn’t buy homes fast enough to meet demand.

Zillow added its 25th iBuying city recently, bringing Jacksonville, Florida, into the mix. This makes it the leader in the number of cities where it transacts iBuying. According to OpenDoor’s website, it only has 21 markets that it serves through iBuying, although it currently does a higher volume than Zillow.

Redfin only had 17 homes to sell in Q3. It is also in fewer markets than either Zillow or OpenDoor, just 15 markets, including most recently Sacramento. While the company is actively buying homes again, it doesn’t expect to have very many homes to sell until the first quarter of 2021. For Redfin, the RedfinNow iBuying program serves as a feeder for the brokerage business. Redfin has been experimenting with having agents present a RedfinNow offer as part of Redfin listing consultation. In fact, after a successful pilot program, Redfin has created a Home Sale Advisor role to help potential home sellers choose if iBuying is right for them. “The most important RedfinNow result has come from offering customers a choice between an instant offer and a brokered sale,” said Glenn Kelman during the earnings presentation.

Both Zillow and Redfin see iBuying as part of a menu of offerings that they can give potential buyers and sellers. As Zillow CEO Rich Barton said on the earnings call, “It will go where it goes and it’s going very well.”

While Redfin and Zillow are both heavily invested in iBuying, that’s not what is driving their profit currently. Redfin is still a brokerage, and it makes its money off of real estate transactions.

Redfin identifies its key issue as keeping pace with demand. Customer inquiries were up by 58% in October, which could mean Redfin needs to increase its agent capacity by as much as 13% if the pace continues into next year. That inability to respond to all inquiries could curb just how much hay Redfin can make out of this hot market. It brought back 500 agents from its April furlough and added 278 employees as lead agents, but they now want to staff up the contractor network used for some on-demand tours.

While revenues were up 36% year over year, CEO Glenn Kelman said that the gain would have been larger if they had more Redfin employee or partner agents. Redfin currently commands 1.04% of the national sales market. In fact, Redfin has paused its marketing with Kelman saying, “It would be madness to woo customers we aren’t sure we can serve well.”

Zillow’s revenue success comes from its IMT segment, which includes its Premier Agent program. Premier Agent revenue of $299 million in Q3 was up 24% year over year. Another important part of this division is rentals. Rentals revenue was up 50% year over year, and Zillow recently announced that it will no longer pull in rental listings for free from multiple listing services.

Mortgage is a growing business for both Zillow and Redfin. Zillow reported that originations revenue was up by 300% year over year, partly due to the refinancing boom. Redfin’s mortgage business earned a profit for the first time, and as the company gets licensed in new markets, especially along the West Coast, it sees a great opportunity for growth.

The elephants in the room

One thing I was hoping to hear about on the call was about how Redfin planned to respond to a recent lawsuit filed by the National Fair Housing Alliance and several other housing groups. The lawsuit alleges that Redfin’s practice of not representing properties under a certain price threshold constitutes a form of digital redlining.

After the suit was filed, Glenn Kelman published an email sent to the company saying that Redfin doesn’t represent certain areas because it is committed to providing agents with a living wage: “The challenge is that we don’t know how to sell the lowest-priced homes while paying our agents and other staff a living wage, with health insurance and other benefits. This is why Redfin agents aren’t always in low-priced neighborhoods. It’s why Redfin doesn’t serve many rural towns.”

It’s likely that Redfin isn’t legally allowed to comment much on the suit, but it still would have been interesting to see it addressed at least briefly.

For Zillow, the question it didn’t fully address on the earnings call was the potential fallout over its decision to license its employees to act as agents in its Zillow Offers transactions. Rich Barton called the decision a “streamlining move” but didn’t address the industry backlash that has been displayed across social media.

Two views of the future

In a shareholder letter, Rich Barton spoke of the tailwinds of technology and a booming real estate market that drove Zillow’s massive growth in the third quarter. Barton said: “We believe these tailwinds are durable, supported by low interest rates and demographic shifts, as Millennials age into their prime home-buying years with Gen Zs lining up behind them. Also, continued investment in technology is enabling people to do more of their shopping and transacting online.”

Kellman was a little more circumspect during Redfin’s earnings call. “What’s most likely is that the housing market stays strong heading into 2021. And even when the market cools, the capacity we’re building now will be put to good use. Our bets on the future aren’t based on a boom, but on competitive advantages, more than a decade in the making.”

Both of these companies are well-poised to make the most of the current market. For Zillow, the challenge is to make iBuying profitable. It is still losing $2,868 per home. Redfin still focuses on traditional transactions. Determining which company is the better investment may depend on how much you believe iBuying is the future of residential real estate.

Central Banks Short on Ammo Forced to Rely on Governments

Thu Nov 12 , 2020
(Bloomberg) — Just eight months after they swung into action to avert a crippling depression and credit crunch, central banks are in the uncomfortable position of relying on governments to power fragile economic rebounds. The decisions their counterparts make will affect not just the growth outlook for the next few […] 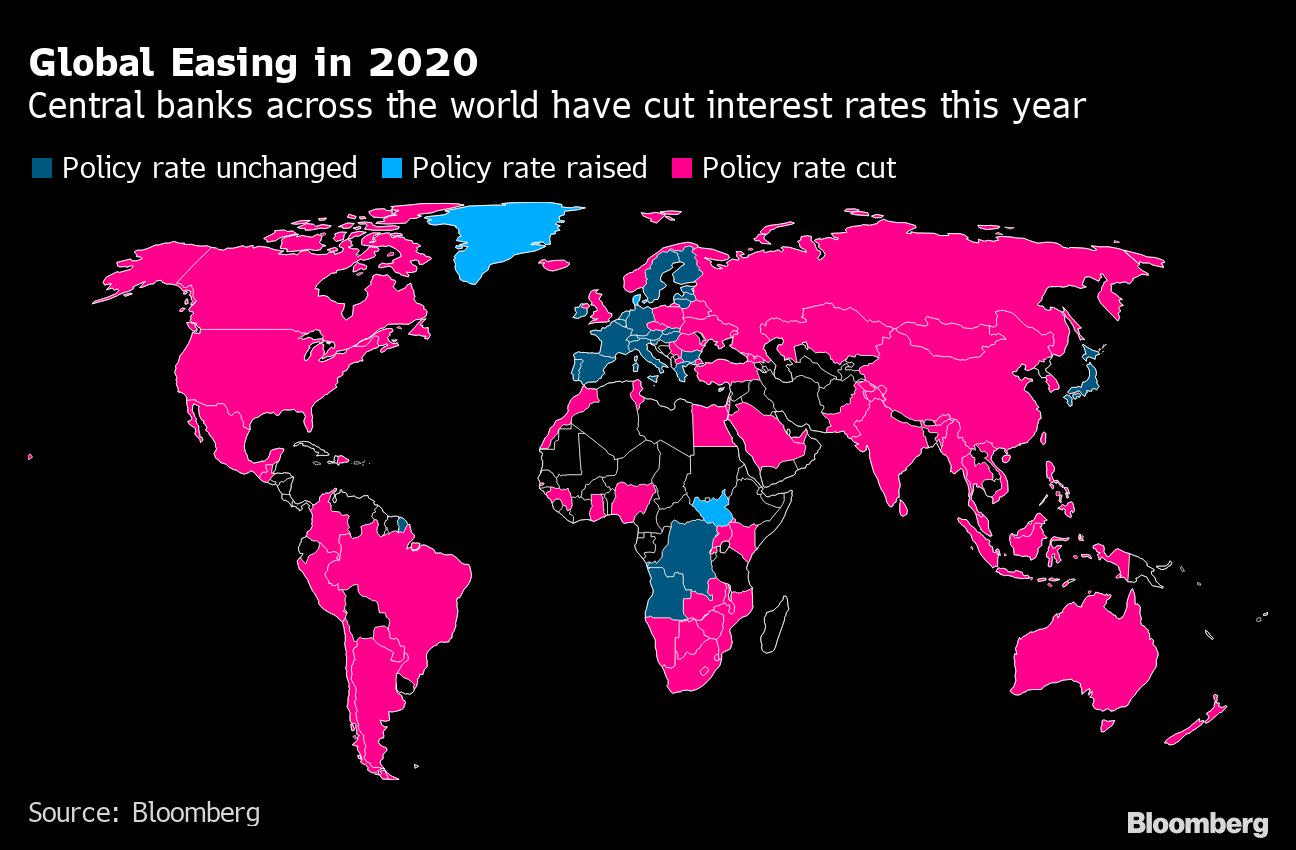