When Siddharth Namachivayam casts a ballot in Colorado this fall, he’ll forego Democratic nominee Joe Biden, whom he sees as just a “Band-Aid,” and instead support the longshot Green party candidate focused on climate action.

“I guess, yeah, it’d be marginally better if Biden was president, but I don’t think Biden being president is more important than the Green party growing in the next couple of years,” Namachivayam says.

If we continue on our current track, he predicts food shortages, global economic instability, refugee crises, populist reactionary movements: all the forces that are already plaguing humanity, intensified. He has little confidence that the world will do what’s necessary to curtail the climate crisis, and he wrestles with the sheer scale of what needs to happen – such as disrupting the entrenched economic interests that run counter to disaster prevention.

“When I think about things like that, I’m just like, ‘I don’t know what to do,’” says Namachivayam, a college junior in California.

Generation Z – the cohort born after 1996 – has the most at stake in the effort to save the environment. They’re often championed as Earth’s great hope, the young people whose optimism and activism will help reverse catastrophic climate change. But while teens and young adults protest in droves, some of their peers fear the cards are already stacked against them.

Sometimes called “doomers”, these deflated young people often insist that radical, systemic change is the only chance for salvation – but find it difficult to believe that the world will actually rise to the occasion.

“You’re not seeing people who are planning for the future, because the future seems so precarious and so unpredictable,” says Max Bouratoglou, a 19-year-old student in California, where 25 major wildfires are currently burning.

He believes “enormous devastation” is coming and that the world has accelerated toward “a climate singularity”.

Because of Bouratoglou’s position on the climate crisis, he’s skeptical of getting married or having children. “Considering how nihilistic I feel about the future and how I will be immediately affected, do I wanna rain that burden upon someone else?” he asks.

While many fatalistic young people – including Namachivayam and Bouratoglou – still try to limit their personal contributions to the climate crisis, they’ve warmed to the doom and gloom arguments popularized by a slew of outspoken academics.

Promoting doom and despair, and the notion that it’s too late to do anything, is literally stealing their future away from them

“Promoting doom and despair, and the notion that it’s too late to do anything, is literally stealing their future away from them,” Mann says. “It is taking away agency on their part.”

Meanwhile, an “ecosystem” of powerful agitators – from the Russian state to fossil fuel stakeholders – have deployed doomism and lies online to disillusion young progressives and craft a false equivalency between Biden and Donald Trump, says Mann, whose forthcoming book The New Climate War details how “forces of delay” are stifling fervor.

“These youth who have become dispirited about climate change and jaded about prospects for climate action, they are victims of a disinformation campaign by bad actors like Russia that have sought to undermine enthusiasm for climate action,” he says. “Part of that is by driving a wedge within the environmental movement, and doomism is a great way to create [that] wedge.”

There are also less nefarious forces at play, such as dystopian conclusions drawn from topical literature. Several young people referenced a book, The Divide, as foundational to their pessimistic views on climate. But its author, Jason Hickel, insists that his work actually argues against the idea that climate change is unstoppable.

“It is true that the existing approach to climate policy is not going to work,” writes Hickel, an economic anthropologist. “But that is absolutely no reason for doom. It just means we have to be smarter about how we tackle the problem.”

Through unprecedented access to technology, Gen Z has been exposed to websites, articles and social media pages propagating doom, explains Joseph Wilkanowski, an 18-year-old co-founder of the Re-Earth Initiative. “I think that especially at a young age, you really catch on very quickly, and you really immerse yourself into that,” he says.

His organization, which instead espouses action, fields pushback from other, more fatalistic students who argue that promoting an environmental movement is a waste of time.

“These young people are right that what is missing is political will, but that is something that we collectively have to create,” says Constible of the Natural Resources Defense Council Action Fund.

“Just throwing in the towel on that is consigning our current peers and future generations to a much more terrible future than is necessary.”

Plenty of Gen Zers are still optimistic about the climate crisis and recognize an inherent fallacy within doomism. “If it is a point of no return, we’re going down. But if we’re saying this, even though it might not be, it’s worth, like, putting in some effort to try and preserve our planet,” says Valentina Doukeris, an 18-year-old international student in Chicago.

Tim Joung, a 20-year-old student in New York, agrees with almost everything that so-called doomers believe: individual action makes little difference, and unscrupulous corporations are at fault for climate change. But he also thinks that society can push for stricter regulations on big polluters.

“If we do nothing, the worst is gonna happen,” he says. “If we at least do something, there might be a chance – maybe not now, but later down the line – for us to save as many people as we can.”

After growing up in a polluted China, Michael He, a student at Pomona College, felt “doomed to have poisonous water and air” when he was only 10 years old. But then he watched the Chinese economy make what he considered substantial progress diversifying from coal within a decade, challenging his preconceptions.

“We have a lot of work to do, but I do not believe in the end of history, you know, end of civilization claims by certain people,” he says.

“If the Titanic’s sinking, I don’t wanna just dive into the ocean and then just not come back up. I’m still gonna struggle like, you know, Leonardo DiCaprio.”

Though it has no teachers, this company gets millions meant for private, charter schools

Mon Sep 21 , 2020
PHOENIX — To its backers, Prenda microschools represents a “return to the one-room schoolhouse” of the past, empowering parents to educate their children in intimate settings away from the cruel public-school bureaucracy. But looked at another way, the for-profit company is reaching for something more contemporary, to be the Uber […] 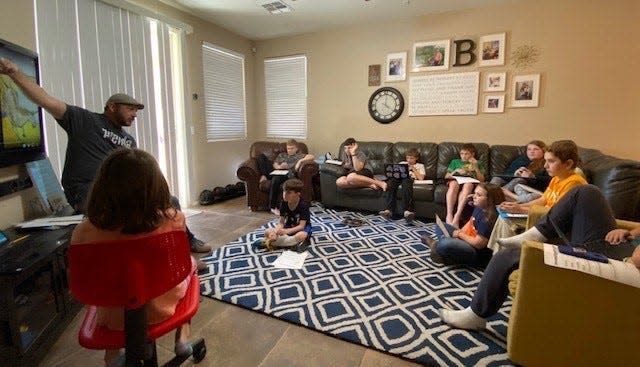