It was supposed to be a fun activity. On July 18, Ellen Weatherford, co-host of the Just The Zoo of Us podcast, tweeted out a simple question:“What is the most overhyped animal?” The post made the rounds of the loose community of researchers, zookeepers, and wilderness enthusiasts that makes up Science Twitter, a community whose passion often manifests as friendly smack-talk. Answers flowed in: blue whales, lions, penguins. A grand time was had by all.

Until a day later, when Michael Eisen, editor of eLife—a well-regarded open access scientific journal for the biomedical and life sciences—made a joke about a humble roundworm, thereby cracking open the seventh seal and ushering forth… wormageddon.

The target of Eisen’s playful ire? A transparent, 1 millimeter-long roundworm called Caenorhabditis elegans, which has been the subject of extensive research since the 1970s. C. elegans is what’s known as a ‘model species,’ a species studied because it provides an easy proxy for understanding biological processes. (Other notable model species are mice and fruit flies.) C. elegans was the first multicellular organism to have its entire genome and neural system mapped, and studies of it have been used in research on Alzheimer’s, nicotine dependence, and muscle atrophy due to time spent in space. The species even has its own online database of genome information and relevant papers.

Most people took the joke in stride, or used it as an opportunity to spread the good word about nematodes. But the worm gang runs deep. Multiple researchers were not amused by Dr. Eisen’s joke, and their responses spiraled off in increasingly disproportionate directions. Some of these were scoldings about the propriety of using the word “fuck” in a public context, and whether “Academic Twitter” upholds appropriate levels of professionalism by accepting “frat boy” humor. One team went so far as to publicly reconsider submitting a paper to eLife. Others complained that the editor of a journal was publicly disparaging a study species. “Look, I’m sure he thinks this is all hilarious. But many of us have had grants and papers rejected based on *exactly* this reason,” wrote one researcher. (Dr. Eisen pointed out that his own grants around fruit flies hadn’t fared any better.)

Dr. Eisen’s responses to the furor were largely good-humored. (Dr. Eisen declined to speak on the record for this piece, citing a desire not to further inflame the situation.) But a day later, in an apparent effort to make clear that he did not actually have anything against C. elegans, Dr. Eisen tweeted in praise of the worm, noting that while it lacks charisma, “it is astonishing how much of our understanding of basic biology, and our tools for studying it, come from experiments enabled by this unique features of this tiny, wriggling and amazing beastie.”

And that should have been that. But by July 20—a day after Eisen had opened the can of titular worms, and amid the flood of C. elegans jokes washing around Twitter—things had escalated in a bizarre direction. As mystified observers raised the question over whether C. elegans researchers were taking the whole thing a bit seriously, a small handful of researchers responded by arguing that jokes about worms were in some way equivalent to jokes about women and people of color.

By far the most prolific poster in this vein was Ahna Skop, associate professor of genetics at the University of Wisconsin-Madison and previous recipient of a Diversity, Equality and Inclusion-based award in 2018. Dr. Skop—who did not respond to a request for comment by The Daily Beast—argued extensively that making jokes about worms was merely the tip of the iceberg when it came to making jokes about marginalized identities, or an example of a ‘bystander effect’, a psychological theory arguing that individuals are less likely to offer help to a victim in a crowd. (For is it not said: First they came for the worm people, and I said nothing, as I was not a worm person?)

In the resulting threads, Dr. Skop—who identifies as “part Eastern Band Cherokee” and “disabled with EDS”—and others consistently failed to publicly respond to Black scientists like herpetologist Chelsea Connor, who tried to point out that this was a ridiculous conflation.  In a private communication Connor shared with The Daily Beast, Skop doubled down, arguing that as she had previously been harmed by entrenched sexism, her concerns regarding the worm joke were justified.

By July 21, wormageddon had transcended petty concerns about crassness or biases in research subject, and was now squirming across much thornier territory: i.e, the tendency of white and white-presenting academics to ignore structural oppression in favor of their personal feelings, and to refuse to authentically amplify the voices of marginalized people. While the dynamic is a familiar one, Connor told The Daily Beast, this example was a new low. “Never before had someone compared me and countless others to a worm…[or made] claims that worm researchers were discriminated against in a comparable or equal way to BIPOC, women and people with disabilities.”

In falsely equating the real oppression of people belonging to marginalized groups to a Twitter joke about a roundworm, Wormageddon 2020 offers a clear example of how white and white-passing women misuse the language of diversity, equality and inclusion, with little accountability and self-awareness, and without any interest in the hurt that such frivolous invocations cause the people they’re theoretically defending. Someone who took the struggles that marginalized people face in academia seriously, after all, would not invoke them to win a Twitter argument about whether a worm joke is rude. “That comparison should never have been the knee-jerk reaction for them,” Connor said. “And then the response [to criticism] should have been better… The harm done stays with us and they get to log out and forget that this ever happened and let it ‘blow over’ meanwhile we have to work to fix what they did.”

If this whole business seems like a lot of fuss over a very small animal, the majority of Science Twitter is confused as well. This just isn’t how these sorts of things usually go, says Maureen Berg, an entomologist who acted as a bemused observer to the ensuing fracas. “Science Twitter constantly has species ‘battles,’ where we get to roast the other team, but then also one-up each other with facts about the animals we’re defending,” Dr. Berg told The Daily Beast. Yet for a solid three days, the worm discourse dominated Science Twitter, between arguments, meta jokes about the arguments, and people plaintively wondering why everyone was talking about something called ‘C. elegans’ and when it was going to stop.

Eventually, it even reached far enough that the unwitting instigator stumbled back across it. Weatherford was scrolling through her news feed on Monday and saw other scientists alluding to drama in the worm community. Intrigued, she found a thread that allowed her to follow the fight back to the original joke. “I was completely shocked to find out that the smoking gun had been my post from days prior that I had already forgotten about.”

How does Weatherford feel about having accidentally started the three-day wormageddon? “Not great! I feel very sorry to everyone whose news feed has been clogged for days on end with confusing worm discourse.” Going forward, she said, she plans to be much more careful about the potential downstream effects of any threads. “I definitely do not want to contribute to the miasma of negativity that already swirls around social media constantly, so I will bring my focus back towards an uplifting and welcoming educational style.”

“All in all, this whole thing was bullshit and got worse each day,” Berg said. “Let us all be cancelled so we can be free of the worm Discourse.”

The roundworms, meanwhile—blissfully ignorant, wriggling back and forth, and fucking themselves—abide.

Get the Best Car-Loan Rate Despite Low Credit Score

Sun Aug 2 , 2020
Consumer Reports has no financial relationship with advertisers on this site. If you’ve ever financed the purchase of a car or a refrigerator, you know your credit score is important to getting a good deal. A good credit score can get you a lower interest rate, while a poor credit score—or having […] 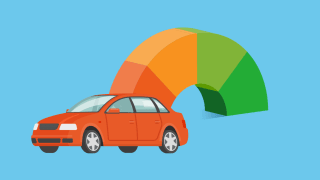